Speaker Pelosi: Don't shut down Congress over the coronavirus. Ramp up your response. 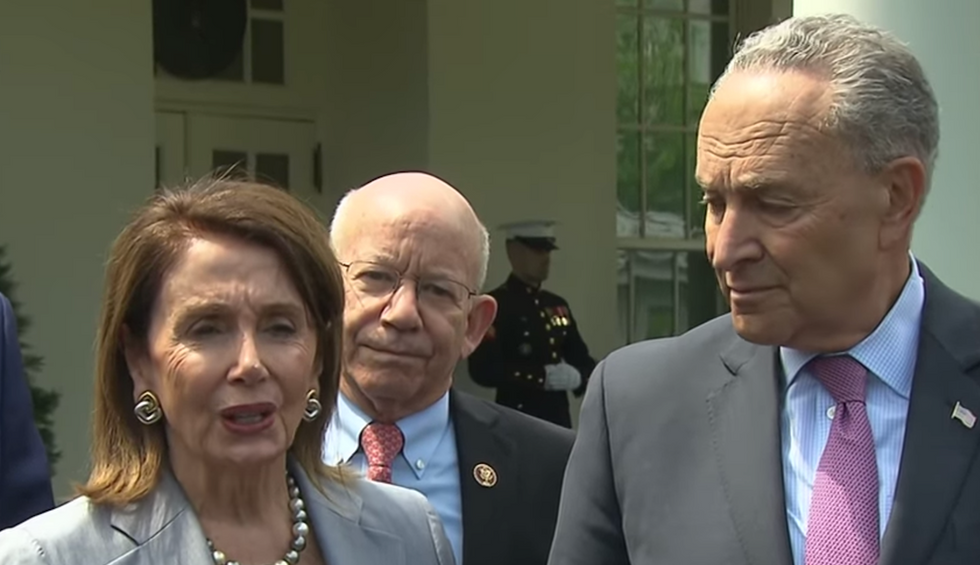 Pressure is reportedly mounting on Congressional leaders to take action to protect members of congress and their staffs from the coronavirus, including potentially recessing the House and Senate.

Speaker of the House Nancy Pelosi should do the opposite.

As we confront a potential public health, security, and economic emergency, Congress has a solemn responsibility to maintain the stable functioning of the federal government, be a source of reliable information and reassurance to the public and be ready to vote on additional funding requests or other emergency measures. If it does not, the only sources of official information from our government will come from the president and executive branch agencies, and we can't rely on President Trump, who continues to insist that COVID-19 is no more concerning than seasonal influenza, to provide that.

Equally important, this is a moment for strong and competent leadership. The administration’s profound bungling of the early stages of the crisis is only now beginning to come to light, but public health experts say it has already worsened the outbreak, proving just how much honest, evidence-based governance matters in situations like this.

Shutting down Congress could also cause people to panic, which would aggravate the situation significantly by causing runs on pharmacies and grocery stores and overwhelming the healthcare system as people with colds or the flu rush to emergency rooms when they don’t need to.

Rather than removing a crucial check on the White House at a time when oversight is desperately needed, the Speaker – along with Senate Leader Mitch McConnell if he can be persuaded – should do three things:

Keep the House (and Senate) running

Suspending the operations of the House would only exacerbate problems: if the chamber is recessed and Members of Congress go home to their districts, they need to go to airports and get on planes, exposing them and everyone around them to greater risks. And if they must be called back for urgent action, the flow would reverse and the problem would be compounded.

The primary obstacle to continuing operations safely is the tradition-driven need to be physically present to take official actions, like voting on legislation, as well as the constitutional requirement that 218 members be present to constitute a quorum of the House. Convening hundreds of people--many of whom, including most of the House leadership, are older and therefore at an elevated risk for complications--in a confined space to conduct official business is an understandable concern, as is the presence of thousands of visitors to Capitol Hill.

But those concerns can be addressed. Remote voting is currently not allowed, but fixing that is only a matter of amending House rules, which can be done quickly via a simple majority vote to the standing rules or, in an emergency, via a suspension of the rules for an individual bill. In fact, Congressman Eric Swalwell (D-CA) has introduced a bipartisan bill several times in the past few years to allow these changes and to count remote participation toward a quorum.

There are many options for how to make remote voting work, including allowing votes via secure videoconference, redefining the House’s current electronic voting system to include votes via a secure virtual private network, or allowing members to vote by proxy using existing House systems (which involve a secure personal key card) so that only a few staffers need to convene on the floor to log in members’ votes. These changes would allow members of congress to stay physically separate in their offices or at their homes.

In terms of the sheer volume of people in the Capitol and the elevated risk of exposure, the Speaker has the power to limit access to the public and the media via House Rule IV and Rule VI – or with a set of amended rules – and she should do so immediately. Media access can be maintained with a small number of pool reporters and with good public health protocols being implemented (maintaining distance, screening for symptoms upon entrance). Access to the public should be suspended, with constituent service meetings occurring via video and audio conference.

Congressional offices should operate only with essential staff onsite, with the rest working remotely. This has actually been done successfully in recent history: During the 2001 anthrax scare and subsequent remediation project, offices (including my own, as a staffer at the time) were moved off site and work was conducted remotely for weeks or months.

The point is, with some creativity, urgency and flexibility, it is entirely possible to keep Congress operating while observing rigorous public health protocols that keep everyone safe.

Awkward as this might seem to both sides at a time of such bitter partisan divide, Speaker Pelosi should start aggressively partnering with Republican Minority Leader Kevin McCarthy and other Republican leaders.

Since the Administration is incapable of being honest brokers of information and has stoked confusion (causing, in some cases, real damage to our ability to track and fight the disease), the third-ranking constitutional officer in the nation must provide the public service of showing that someone in the government is on top of things. The most effective way to do that--and to send a powerful signal to the public and the markets that the crisis is being taken seriously by their government--is to display a level of bipartisan cooperation and unity.

The Speaker should start by holding a daily coronavirus press briefing with McCarthy at her side, with an agreement that it will not be a forum for politics, criticism or expressions of support or condemnation of the administration – just facts and legislative actions. Beyond that, Democrats should make Republican leaders genuine partners in sharing information, proposing policy steps and receiving both criticism and praise for Congress's response.

After the 9/11 attacks, members of congress sang God Bless America together on the Capitol steps. For an epidemic like COVID-19, which is on track to potentially kill substantially more Americans, standing together in crisis is the least that we can ask of our leaders.

This would be doubly good for the country, creating not only a more coordinated and faster government response that would promote public confidence and provide necessary resources, but also making it harder for nefarious actors in the Trump administration to politicize events and sow further division, confusion and anger in order to protect the president’s image.

That kind of division-through-politics is a real and ongoing danger. The administration’s response to criticism so far has been to say that Democrats are politicizing the coronavirus – which is a shameful and misleading but effective defensive strategy. That is why it is so important for Democratic leaders to counteract it not with more politics, but with less.

For anyone squeamish about the politics of a more bipartisan approach, the rule in a national emergency is: Do the right thing and the politics will usually take care of themselves. And even if they don’t, appearing too partisan during a crisis is almost always political poison anyway, so Democrats don’t want to go down that road.

A potential side benefit is that by working with Republicans on both substance and communication, Democrats may force the administration to up its game. Either way, they would only do themselves and the nation a favor by working closely with Republican counterparts in congress.

And if Republicans refuse? The second best thing to do in a crisis is to at least get caught trying to reach across the aisle, and the Speaker can certainly do that.

But big legislation can be both time-consuming and hard to pass. Small, rifle-shot bills are not only a lot easier – especially if they are simple, 60-day measures like suspending the collection of certain taxes or adding worker benefits that can be extended or allowed to lapse as circumstances warrant – but they have the added benefit of showing the public constant action from their government.

The Speaker could start passing two or three such measures each week, ideally with bipartisan support and a commitment from Senate Leader McConnell for swift Senate action (but if not, again, at least she can get caught trying).

This is no small matter. It was essentially President Roosevelt’s strategy during the Great Depression to show the country that their federal government was trying every available avenue to staunch the bleeding. The concomitant sense of action, competence and attention would provide needed reassurance to people and to markets.

The bottom line is that President Trump’s approach thus far has left a massive gap in the governance of our nation and harmed the public’s health and safety. Congress needs to step in and fill it. This is a time for leadership. House Democrats must provide it.