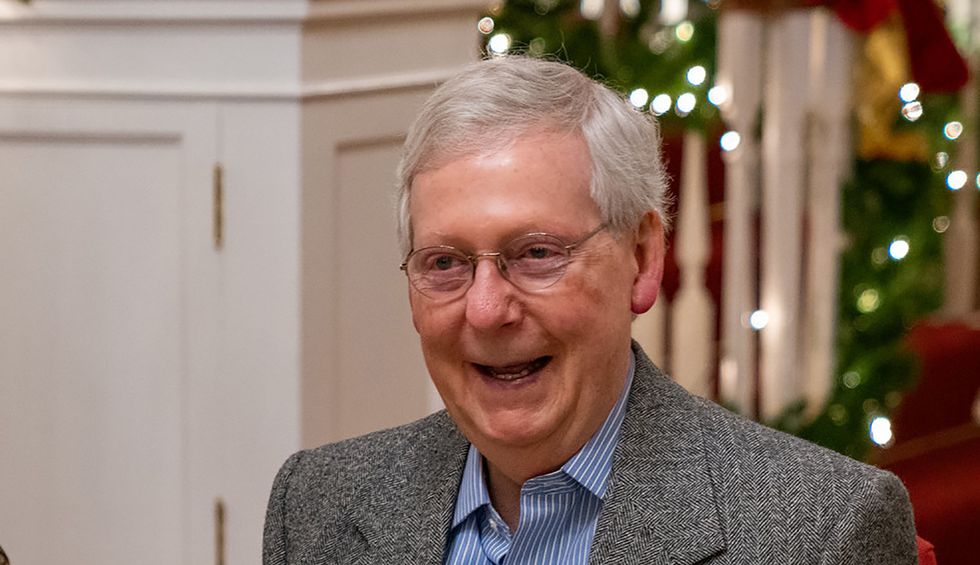 The Senate failed on Sunday night to move forward with a massive economic relief package and, after negotiating through the night, will try again on Monday. Senate Majority Leader Mitch McConnell “angrily lectured Democrats about the outcome” Sunday night—doesn’t that sound exactly like Mitch?—but his anger was not because, as he claimed, Democrats were “play[ing] games here with the American economy and the American people,” but because Democrats had refused to go along with his $500 billion slush fund for big business.

McConnell is also angry because his plan to corner Democrats into passing a bad bill failed. McConnell is blaming House Speaker Nancy Pelosi for swooping in late in the game and tanking the bill, Politico’s Jake Sherman explained in a useful Twitter thread about where the situation stands now, but the only reason Pelosi came in late was because McConnell had excluded her from negotiations days ago. Senate Minority Leader Chuck Schumer and Treasury Secretary Steven Mnuchin negotiated late into the night after the bill failed to move forward, 47-47.

This is a bill that would allow the Treasury Department, run by top Trump brown-noser Steven Mnuchin, broad discretion over how to distribute that $500 billion to big businesses. And Donald Trump refused to rule out the possibility of his own business getting some of the money, saying “I just don’t know what the government assistance would be for what I have. I have hotels. Everybody knew I had hotels when I got elected.” Yeah, but everybody didn’t know the hotel industry might be in line for a big federal bailout.

Workers at the companies being bailed out wouldn’t get much in the way of protections, but Republicans say that the need for speed is too great to stop and write those protections in—after those same Republicans took their sweet time getting to the point of having a bill at all.

“They’re throwing caution to the wind for average workers and people on Main Street and going balls to the wall for people on Wall Street,” said Sen. Joe Manchin. This bill has JOE MANCHIN sounding like Elizabeth Warren, if you need a clear sign of how bad it is. As for Warren, she tweeted, “Millions may now lose their jobs. And Trump wants our response to be a half-trillion dollar slush fund to boost favored companies and corporate executives—while they continue to pull down huge paychecks and fire their workers.”

The bill also includes $350 billion for small business and direct payments of $1,200 to adults and $500 to children, with payments phasing out for people who make $75,000 or more. There’s also $100 billion for hospitals and $250 billion for state unemployment insurance programs.