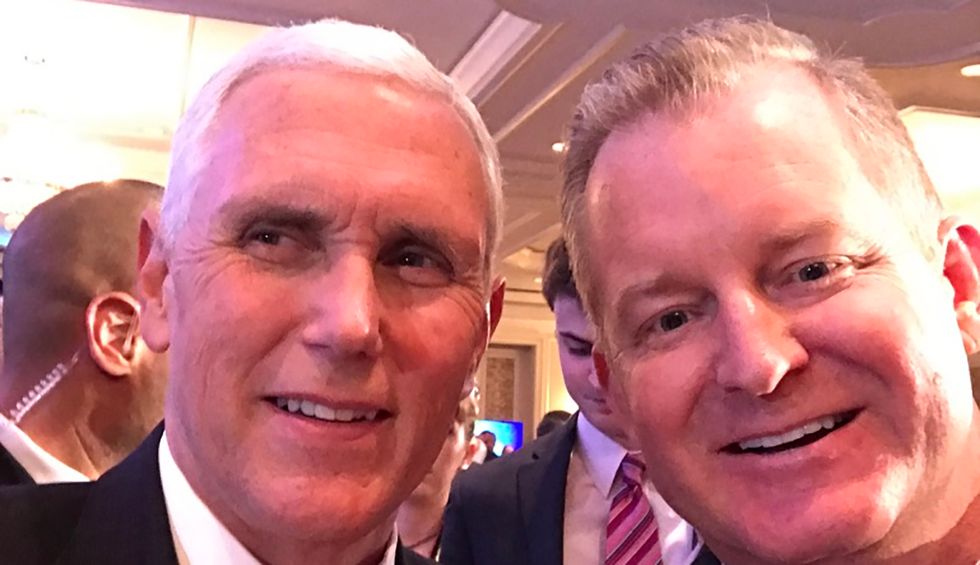 If you've been following the latest news on the coronavirus outbreak, you probably saw at least some snippets of President Trump's visit to the CDC last Friday. It will stand as one of the most astonishing appearances by this or any other president — and that's saying something. When asked if he regretted firing the entire staff of the Office of Pandemic Preparation, Trump said, "This is something that you can never really think is going to happen." He said that everyone who wants to be tested for this virus can get tested, which is not even close to true. He called Gov. Jay Inslee of Washington state, who is on the front lines dealing with this epidemic, a "snake."

He made it clear that he wants to cook the numbers so it doesn't look as if the nation is in the midst of an epidemic. This has been obvious from the outset, but for the president to come out and say it is something else again:

Mostly, however, he patted himself on the back:

You know, my uncle was a great person. He was at MIT. He taught at MIT for, I think, like a record number of years. He was a great super genius. Dr. John Trump. I like this stuff. I really get it. People are surprised that I understand it. Every one of these doctors said, "How do you know so much about this?" Maybe I have a natural ability. Maybe I should have done that instead of running for President.

As a reporter, in general I'm not supposed to say something like this, but: The president's statements to the press were terrifying. That press availability was a repudiation of good science and good crisis management from inside one of the world's most respected scientific institutions.

Let's put that another way: The CDC was considered one of the world's most respected scientific institutions. It has not been covering itself in glory during this crisis.

The most unnerving aspect of the government response so far has not been Trump's gibberish. He's in over his head and it shows, as usual. And we know from his response to Hurricane Maria and other natural disasters that his only concern in a crisis is for his own political well-being. But I wouldn't have expected to hear the director of the CDC, Robert Redfield, laud Trump like a Fox News pundit:

It's a full-blown ritual at this point for members of the Trump cabinet and Republicans in Congress to genuflect to the president as if he were a 15th-century pope. And we know that public health experts have had to tread very softly in order not to upset him.

Still, it was surprising to hear such a slavering tribute from a scientist in the midst of a global health crisis. Likewise, it was strange to hear the highly esteemed U.S. global AIDS coordinator, Dr. Deborah Birx, make similar comments when she was introduced as part of the coronavirus task force back on March 2:

It is clear the early work of the president over travel restrictions and the ability quarantine has bought us the time and space to have this task force be very effective. I have never worked with such incredible scientists and thoughtful policy leaders...

It seemed just a bit over the top. But these two weren't the only ones:

There's something important happening under the surface here. It may not simply be that these health policy professionals are trying to keep the kooky president happy so they can do their work on behalf of the country. They may be Trump true believers.

U.S. Surgeon General Jerome Adams, for instance, is a Mike Pence crony who previously served as the Indiana state health commissioner. He was intimately involved in the horrific HIV outbreak in that state, where Pence refused to authorize a needle exchange program until a number of people had died unnecessarily. Naturally, Trump appointed him surgeon general.

Redfield and Birx are both evangelical Christians who have been associated with HIV research for many years, going back to the 1980s. Birx runs PEPFAR, George W. Bush's global AIDS initiative, and both she and Redfield have been involved with Children's AIDS Fund International, which lobbies for abstinence-only sex education around the world.

The Washington Post reported back in 2018 that they belong to a network run by an important power broker in the evangelical world:

Evangelical activist Shepherd Smith has spent more than three decades cultivating relationships with leading AIDS researchers and policymakers to promote abstinence-only sex education and other programs. Those connections now could influence government programs and funding within the Trump administration. Among the most prominent: Robert Redfield, director of the Centers for Disease Control and Prevention...

[His wife] Anita Smith is now a consultant within PEPFAR to Deborah Birx, a physician and ambassador at large who oversees the program's estimated $5 billion annual budget. Birx is also a former board member of Children's AIDS Fund International and served until she was hired by the CDC in 2005, a PEPFAR spokesman said.

Anita Smith was hired by Birx to "improve prevention programs aimed at preteen girls." I'm pretty sure we know what she recommended.

Redfield and Birx both served in the military doing AIDS research in the mid-1980s. Redfield is well-known for recommending measures that were considered extreme even within the Reagan administration, including the forced quarantine of AIDS patients. He later had a financial interest in an HIV vaccine that didn't work, but which he continued to push. Birx, on the other hand, has maintained a stellar reputation.

To be clear, none of this means that these people aren't qualified for the jobs they hold. They both have medical degrees and relevant experience. But they seem to be part of a conservative subculture of evangelical Christians who have found a foothold in the Trump administration clustered around Mike Pence's office. Along millions of other evangelicals, it appears they really believe in Donald Trump.

Setting ideology aside, however, what Trump wants these people to do — cover up his own ignorance and incompetence — is totally at odds with what they must know is best for the health of the American public. Is their worshipful admiration for this man blinding them to the need to communicate honestly with the American people about this crisis? Because that would explain a lot.