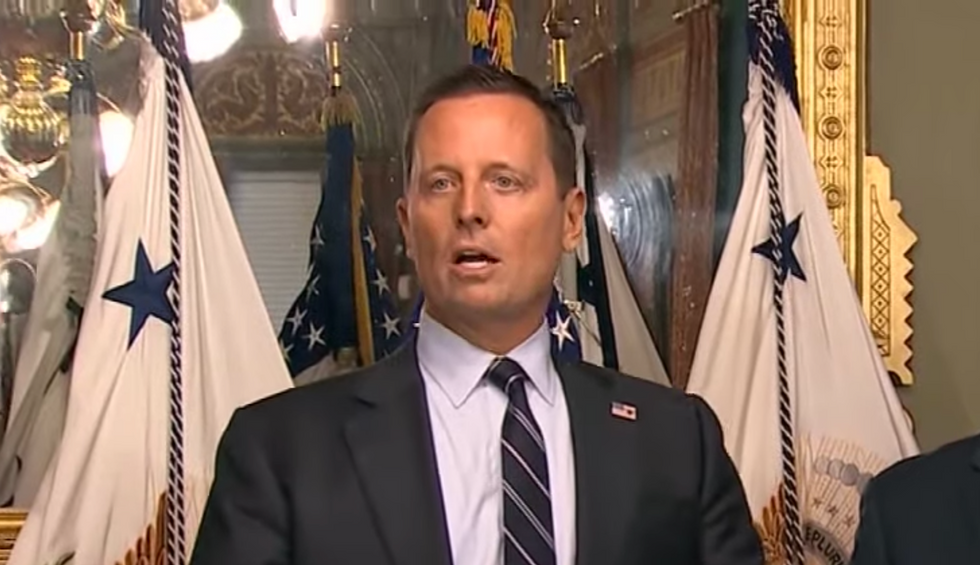 Acting Director of National Intelligence Richard Grenell was expected to brief lawmakers about election interference on Tuesday, according to CNN, but his office announced at the last minute that he will not be showing up.

He would have joined other top national security officials to deliver the information to Congress. However, other "experts" were sent in his place. Grenell denied to CNN that he had ever intended to show up for the briefing, but the outlet reported that it obtained documents sent to multiple lawmakers' offices indicating that he would be appearing on Tuesday.

The odd and unexplained turn of events followed a report from Time on Monday that found that the controversial appointee's office is withholding or delaying a global threat assessment from Congress that "warns that the U.S. remains unprepared for a global pandemic," citing two officials who have seen the documents.

Grenell has a lot to answer for, and he may be apprehensive about subjecting himself to questions from Congress. He has little background in intelligence work and had been serving as ambassador to Germany before President Donald Trump dropped him into the DNI role. From all appearances, Trump picked him for the position because he was seeking a loyalist; Grenell has previously drawn attention to himself by being a shameless pro-Trump partisan. After Trump picked Grenell to serve in an acting capacity, Trump nominated another loyalist, Rep. John Ratcliffe, whose nomination for the permanent position had previously been stalled when it was reported he had engaged in dubious resume padding. It now appears Trump is trying to force Congress to accept either Ratcliffe or Grenell — both entirely unsuited to the dispassionate position — so that he can politicize the intelligence community's work in his favor.

The Time report leaves the impression that Trump's attempt to politicize the intelligence community is already working. It's not just the threat assessment's findings about U.S. pandemic preparedness that Trump may prefer to keep hidden — he's currently coming under fire for a botched response to the coronavirus outbreak. It also seems likely he would want to conceal parts of the assessment that could be seen as undermining key aspects of his foreign policy:

Other dangers flagged in the 2020 report, according to the two sources, include Iran’s return to nuclear enrichment, North Korea’s accelerated launching of missiles and the increasingly urgent national security risks posed by climate change.

Trump continues to deny or downplay Russia’s efforts to interfere in U.S. elections through propaganda and disinformation promulgated on bogus social media accounts. The threat assessment has warned for years that “Russia poses a cyber espionage, influence and attack threat to the United States and our allies.”

Trump touts his diplomatic efforts with North Korean dictator Kim Jong-Un, but past intelligence assessments have been skeptical about their effectiveness. This year’s still-unpublished report echoes the 2019 assessments that North Korea “is unlikely to give up all its WMD stockpiles, delivery systems, and production capabilities” and that “North Korean leaders view nuclear arms as critical to regime survival,” according to a former official who was involved in preparing this year’s report.

CNN also noted that Grenell's appointment as acting DNI came after Trump was reportedly unhappy with the office's communications to Congress about Russian election interference under DNI Joseph Maguire:

Tuesday's briefings come almost three weeks after Grenell was controversially named to the top intel job, in the wake of an election security briefing by Pierson that angered Trump because she testified that Russia supports the President's reelection bid.
In unprepared remarks, Pierson had told members of the House Intelligence Committee in a February 13 briefing that Russia is meddling in the 2020 campaign and intelligence indicated it had once again developed a preference for Trump (as well as Democratic presidential candidate Sen. Bernie Sanders).
However, a senior intelligence official denied that Pierson had told lawmakers that Russia was actively aiding Trump's reelection effort.
Grenell replaced Adm. Joseph Maguire and pushed out his deputy, Andrew Hallman, a longtime CIA officer. An official from the National Security Council who had previously worked to discredit Robert Mueller's probe into Russian activity, Kash Patel, was named an adviser to Grenell.