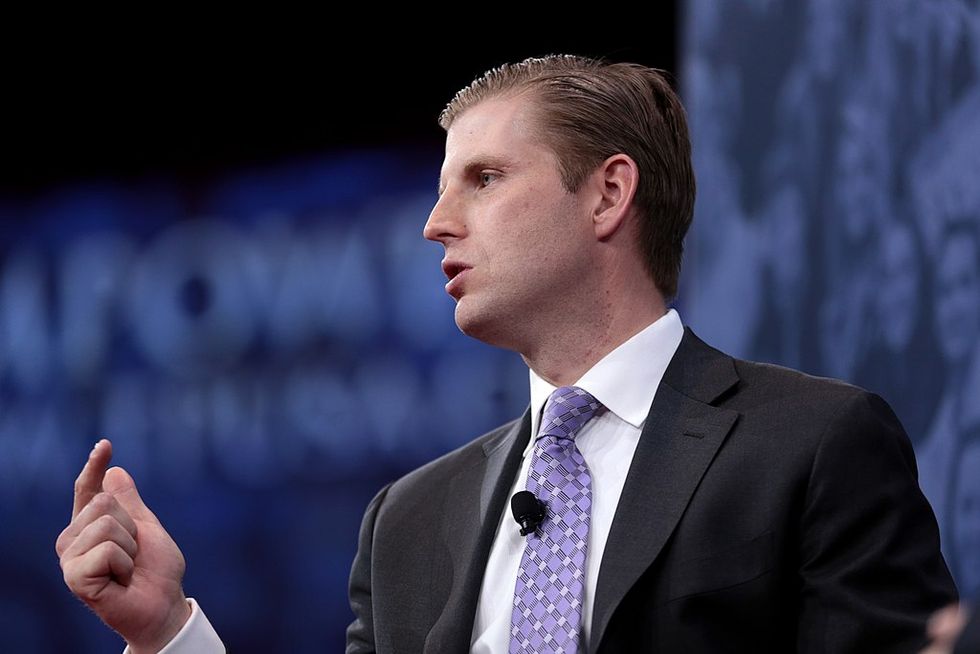 Eric Trump has claimed that Secret Service agents "stay at our properties for free — meaning, like, cost for housekeeping." He insisted last year that "we charge them, like, 50 bucks."

But receipts obtained by Public Citizen and first reported by The Washington Post show that Trump's properties have charged the Secret Service $396 per night for 177 rentals at Trump's Mar-a-Lago resort since he took office.

The Post previously reported that some Trump properties charge taxpayers as much as $650 per room. The president's Bedminster, N.J. golf club also charged $17,000 per month for Secret Service agents to rent a cottage on the property. The Secret Service continued to pay for the cottage even after he left.

The report found that taxpayers spent more than $471,000 on Trump properties, but the new receipts show that the Trump Organization charged Secret Service an additional $157,000 since 2017, bringing the total to more than $628,000.

Trump has spent 355 days, or nearly a full third of his presidency, at his own properties. After reviewing hundreds of Trump property stays, The Post was unable to find any instance in which the Trump Organization charged agents for $50, as Eric Trump claimed, or even below $100.

The bills from Mar-a-Lago do claim that the $396 room rate is the property's "at-cost" rate, but hotel experts told The Post that the average housekeeping bill at a luxury hotel is typically between $40 and $50.

Diego Bufquin, a professor at the University of Central Florida's Rosen College of Hospitality Management, told The Post it was "not possible" that at-cost rates would balloon to nearly $400.

"Let's say that you use the best shampoos, the best soaps, the best conditioners, the best coffee," he explained. "At the end of the day, you may have something approaching $100 if you have the top products in the world in your guest room . . . I've never seen variable costs per room sold at $400."

The report noted that the starting salary for housekeepers at Mar-a-Lago is just $11.17 per hour.

"I joke all the time that I would like nothing more than to never have another person from the government stay at one of our properties, because it displaces a true paying guest," he claimed, even though the company charged some government officials even more than it charged Secret Service agents.

On the other hand, some government officials were charged only $195, which is the federal maximum, on the same nights that the company charged Secret Service agents $396 per room.

All of this information was obtained through public records requests, yet the documents only detail a fraction of taxpayer spending at Trump's properties.

Rep. Carolyn Maloney, D-N.Y., the chairwoman of the House Oversight Committee, told The Post that she has not gotten a response to her requests about Secret Service spending records at Trump's resorts.

"The Secret Service has a statutory duty to report its expenditures at Trump properties," she said. "And the incomplete record further underscores the need for transparency.

Jordan Libowitz of the watchdog group Citizens for Responsibility and Ethics in Washington, agreed that the delayed release of records may be more concerning than what is in the records produced so far.

"It is more than a little disconcerting, knowing this is going on, and not knowing what the actual numbers are," he said. "That's kind of crazy that we know the president is benefiting from the presidency, and we do not know how. We do not know how many taxpayer dollars are in his pocket."