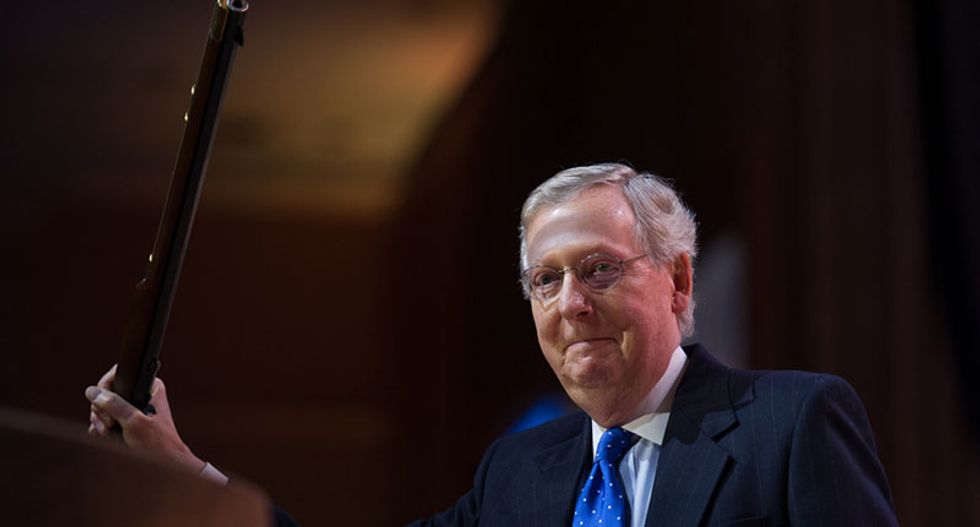 We just witnessed one of the clearest examples of a profound structural advantage for the GOP.  Senate Majority Leader Mitch McConnell (R-KY) wasted ten precious days advancing a relief package laden with "poison pill" measures that according to the polls, were broadly opposed by Democrats, Republican and independents alike, and blocking provisions sponsored by Democrats that were popular across party lines.

The political press reported the substance of these disputes as they usually do: Briefly, in the 8th or 9th paragraph of print pieces, and without any acknowledgment that Democrats were fighting for stuff that both Democrats and Republicans wanted. There was far more focus on the legislative process and various political calculations, which is also typical.

As a result, those who just skimmed the headlines or caught a cable segment about the dispute would have had no idea what the parties were fighting over.

It's hard to overstate how broadly the public supports what Democrats were trying to insert into the legislation.

Congressional negotiators and the White House wrangled over a large number of issues, but there were two significant sticking points. First, following the regime's lead, Republicans wanted to give the White House discretion over distributing hundreds of billions in corporate bailouts, and vigorously opposed Democratic efforts to attach conditions to that relief which would, among other things, prevent executives from pocketing the funds or enriching their shareholders rather than taking care of their workers.

Trump's claim that he would "be the oversight" for a huge amount of funding was clearly a non-starter. Meanwhile, most of the provisions Democrats fought for were recently proposed by Sen Elizabeth Warren, and Data for Progress conducted a survey to gauge public opinion about those measures.  Other than barring bailed-out companies from buying back their stocks, which half of respondents didn't understand well enough to form an opinion, they all proved to be extremely popular.

And, unusually, they were popular across party lines. Republicans favored barring companies that received federal funds from laying off their workers by a 70-13 margin; they favored holding CEOs accountable for not complying with these rules 61-14; Republicans were in favor of a ban on dividends and bonuses by a 63-17 margin and 60 percent of Republicans approved of requiring shareholder approval of political spending against only 14 percent who opposed it. Pluralities of Republicans favored all of the other provisions tested.

The other main point of contention centered on direct cash payments to keep individuals and households afloat. The bill Senate Republicans put together without Democratic input called for $1,200 payments for adults who pay federal income taxes, but only $600 for people with no federal tax bill. Given that the Earned Income Tax Credit and other benefits for lower-income households with kids bring many families below the tax threshold, this would have effectively given more money to those in less need. Democrats (who had offered adults $2,000 payments in their House bill) objected.

Here we don't have clear-cut polling--I haven't come across a survey that asked specifically about the Republicans' regressive approach to these payments. But we can extrapolate from surveys that find overwhelming--and again, bipartisan--support for the idea of sending checks out to Americans generally.  Eighty-two percent of respondents to an Ipsos poll favored direct cash relief, with only 11 percent opposed. It's a safe bet that with that kind of support, most would side with Democrats that $600 per adult for lower income households isn't enough.

Democrats won these fights, but not before ten more days of economic hardship for millions of people had passed. McConnell had laden down the bill with provisions that he knew Democrats would balk at in an attempt to make them bear responsibility for the economic crash. It was pure, bare knuckled partisan politics at a time when people of all political views desperately needed Congress to stop playing games and offer some federal support. It was cruelly cynical, and it echoed Trump's own strategy of calling to reopen schools and businesses so he can shift blame for the coming recession onto Democratic governors.

But one would never know about any of this by skimming media reports about this "partisan standoff."