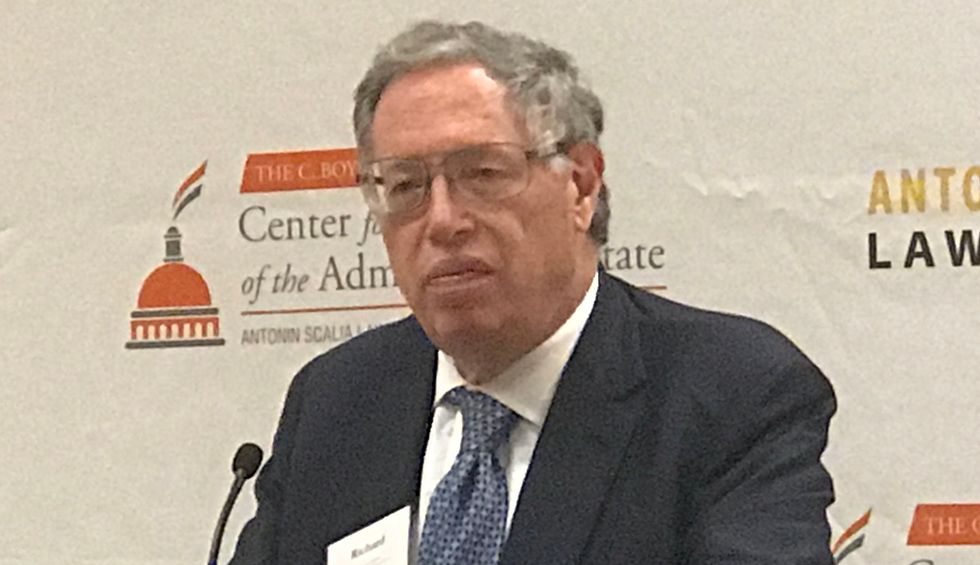 It seems like years, but it was only one week ago that Donald Trump, impatient at the fact that the COVID-19 pandemic was taking up so much of his precious time, declared he was considering steps to cut back on attempts to prevent the virus from spreading.

The very same day, the Washington Post also reported on a scientific article that was being circulated back and forth in emails between “numerous administration officials” at this time (no doubt with subject headings like: “Read this now!”):

Conservatives close to Trump and numerous administration officials have been circulating an article by Richard A. Epstein of the Hoover Institution, titled “Coronavirus Perspective,” that plays down the extent of the spread and the threat.

As any lawyer will tell you, it is not difficult to find an “expert” willing to spout out the most far-fetched “scientific-based” balderdash imaginable. It’s often simply a matter of cloaking that balderdash in calculated, impressive-sounding terminology, designed to hide the fact that it is written to achieve whatever desired result a particular client wants. As reported by Isaac Chotiner for the New Yorker, this particular article authored by Richard Epstein for the conservative Hoover Institution think-tank, fit the administration’s political needs to a tee.

Epstein, a professor at New York University School of Law, published the article on the Web site of the Hoover Institution, on March 16th. In it, he questioned the World Health Organization’s decision to declare the coronavirus outbreak a pandemic, said that “public officials have gone overboard,” and suggested that about five hundred people would die from COVID-19 in the U.S. Epstein later updated his estimate to five thousand, saying that the previous number had been an error.

When you have to “update” your conclusions to reflect an error you made by tenfold, that’s what we would call a “red flag” (the current death toll in the U.S. from COVID is already over 2000, with credible sources estimating we may be looking at 100-200,000 dead, or possibly many more). In fact, had Epstein stopped there he could have retreated into his think tank in relative obscurity, deleted the paper from the public memory and lived out a happy life as only a vaguely remembered fool with respect to the worst pandemic to strike the planet in over a century.

But like many people with oversized, prickly egos, unaccustomed to having their work revealed as faulty and error-filled, Epstein, who Chotiner describes as a “one of the most cited legal scholars in the country,” and notable for his “libertarian-minded reading of the Constitution,” just couldn’t leave well enough alone. He just had to set the record straight.

So he compounded his error by making an even more colossal blunder: he granted an interview to the New Yorker. What followed is one of the most devastating portrayals of a purveyor of “junk science” that can be imagined.

After apologizing for his “stupid” error in projecting the number of U.S. fatalities, which he characterizes as “the single worst public-relations gaffe I’ve made in my entire life,” Epstein then proceeds to mount an arrogant, pompous and error-filled defense of his methodology (“the question to ask, Isaac, is not whether I chose the right number but whether I had the right model.”)

First, we realize that Epstein doesn’t even have a basic understanding of the nature of COVID-19:

[Epstein]: And so you take a population like in Kirkland, which is fragile and old, you get somebody in who has a strong version of the virus, and the thing will just absolutely rip through the population and kill everybody in it within a very short period of time. [Daniel Kuritzkes, the chief of the infectious-diseases division at Brigham and Women’s Hospital, in Boston, said, after being read this passage, “There’s no evidence that there are strong and weak variations of the coronavirus circulating. There may be minor variations person to person or location to location in the actual genetic sequence, but there is no evidence that they have different virulence or that a less virulent version is overtaking a more virulent version.”]

Next, Epstein reveals he lacks a basic understanding of how the virus is transmitted. For example, he attributes the high death toll in Washington State to the fact that people in that state “probably” received “large doses” of the virus through “hugging and kissing” the residents of the Kirkland Life Care facility, where COVID-19 was first identified in that state:

[Epstein]: And Washington State had a very high peak early on. And, probably, most of the deaths that we have today, if you went through and chased them down, were either people who are in the facility or people who have family members who hugged and kissed people in the facility. So they got large doses of intense viruses. [Albert Ko, a professor of epidemiology and medicine and the department chair at the Yale School of Public Health, responded, “There is no evidence that you have a higher risk of dying from contact from someone in the facility than if you had contact from some other source.”]

Epstein, who is neither a virologist, an epidemiologist, nor a physician, then opines that a “change in genetic viral behavior” along with changes in human behavior would lead to an “adaptation,” altering the course of the virus.  In his view, the failure to consider such “adaptation” led to overreaction among state governors to the potential impact of the virus:

[Chotiner]:You wrote, “The adaptive responses should reduce the exposures in the high-risk groups, given the tendency for the coronavirus to weaken over time.” What tendency are you talking about, and how do we know it will weaken over time?

[Epstein]: Well, what happens is it’s an evolutionary tendency. [“There is absolutely no evidence for that,” Ko told me. According to Kuritzkes, “There is no proof that this is the case. To the extent we see that evolution taking place it is usually over a much vaster timescale.”]

He then repeats that he assumed the coronavirus would weaken over time:  “This tendency takes time. It could be a week. It could be a month. It could be longer. But, in the end, you should expect something of this particular sort to take place.”

In fact, Epstein says he knows of “no exception” to the rule that such viruses weaken over time. Unfortunately, he’s wrong here as well:

[Epstein]: Over time, yes. And is this a hundred-per-cent tendency? No. Is there any known exception to it? No. [“We did not see SARS or Ebola weaken over time,” Kuritzkes said. “It is only appropriate public-health measures or vaccines that have helped to control those epidemics.”]

But it is the exchange at the end of the interview between Chotiner and Epstein that is the most revealing:

[Chotiner]: I know, but these are scientific issues here.

[Epstein]: You know nothing about the subject but are so confident that you’re going to say that I’m a crackpot.

I’m not saying anything of the sort.

Admit to it. You’re saying I’m a crackpot.

I’m not saying anything of the—

Well, what am I then? I’m an amateur? You’re the great scholar on this?

No, no. I’m not a great scholar on this.

Tell me what you think about the quality of the work!

O.K. I’m going to tell you. I think the fact that I am not a great scholar on this and I’m able to find these flaws or these holes in what you wrote is a sign that maybe you should’ve thought harder before writing it.

What it shows is that you are a complete intellectual amateur. Period.

O.K. Can I ask you one more question?

You just don’t know anything about anything. You’re a journalist. Would you like to compare your résumé to mine?

No, actually, I would not.

Then good. Then maybe what you want to do is to say, “Gee, I’m not quite sure that this is right. I’m going to check with somebody else.” But, you want to come at me hard, I am going to come back harder at you. And then if I can’t jam my fingers down your throat, then I am not worth it. But you have basically gone over the line. If you want to ask questions, ask questions. I put forward a model. But a little bit of respect.

O.K. Let me ask you this question. All my questions are asked with respect.

That’s not the way I hear it.

At this point, Epstein finally gets something right:  this is the ranting of an egotistical crackpot who has been caught flat-footed and is attempting to defend his own incompetence, by attacking his interlocutor as “an intellectual amateur,” whose resume cannot possibly compete with his own.

This would be comical if lives weren’t at stake. But by relying on this incompetent charlatan to inform public policy (policy which has been followed by at least some Republican governors in creating their own state’s response to the pandemic), the Trump administration may have caused hundreds if not thousands of additional deaths.