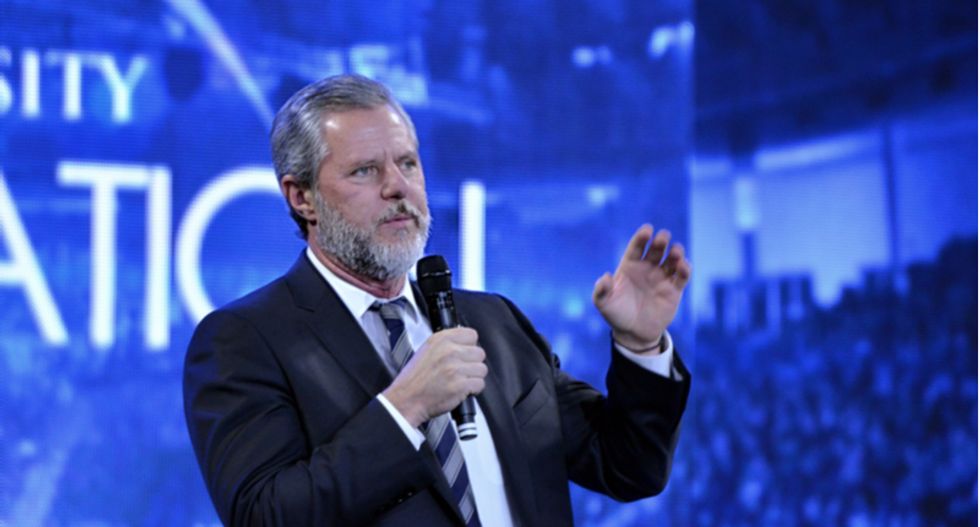 I suppose we owe Jerry Falwell Jr. a debt of gratitude. I’m serious.

Falwell is the son of the late Jerry Falwell, the man most responsible for bringing fundamentalist Christianity out of the political wilderness during Ronald Reagan’s presidency. Junior, along with Franklin Graham, himself a scion of a religious dynasty, is perhaps the president’s greatest champion among white evangelical Christians.

He appeared on “Fox & Friends” today. Among other things, he accused Donald Trump’s enemies, including the press, of hyping COVID-19, the new strain of the coronavirus spreading around the world, panicking global markets and closing down entertainment and cultural events here and elsewhere. He, like Tom Cotton, the fascist senator from Arkansas, believes the disease outbreak can be blamed on totalitarian regimes in the east. For Cotton, that’s China. For Falwell, that’s North Korea. (While Falwell was on air, the president announced a state of national emergency related to the outbreak, undermining his and Cotton’s search for a scapegoat for his sake.)

Falwell’s demagoguery isn’t what we should be thankful for. What we should be thankful for is his confessing without appearing to know it that a pillar of “principled conservatism” in the United States is no pillar at all. Not in practice. Once you see that this pillar rests on a bed of sand, rather than constitutional bedrock, you start seeing other “conservative principles” do, too. “State’s rights,” “gun rights,” “the right to life” and even “religious freedom” are nearly always about something other than what they seem to be. Falwell and his ideological confederates can’t be honest about it, though. If they were, they’d lose. Dishonesty, fraudulence and bad faith are central to their aims.

What would Jesus do? Not that.

Here’s some context, courtesy of the Christian Science Monitor: “As in many states, residents in parts of rural, conservative Virginia say they seem to inhabit an increasingly different daily reality than that of urban and suburban districts. That feeling of separation was compounded by last November’s Democratic sweep of the state’s elected offices. Now residents in Frederick County are mulling a radical proposal: seceding from Virginia and joining neighboring West Virginia” (my italics).

Apparently Falwell is part of the effort. He’s the head of something called “Vaxit,” according to “Fox & Friends.” Whether that’s a real organization I have no idea, but that’s not what I’m most interested in. I’m most interested in expressing gratitude to the good reverend for admitting “state’s rights” have nothing to do with conservatism.

In saying counties should leave the state as casually as ordering unsweet tea with his burger and fries, the Rev. Falwell told us without knowing he was telling us that conservatism in theory is authoritarianism in practice. It cannot and will not tolerate democratic change, despite change coming with the blessing of the majority. If the majority rules, Falwell and his confederates will abandon commitments to democracy.

Once you abandon democracy—once you open the door to treason—there’s no end in sight. Once it seceded, “the Confederacy began to deny states’ rights,” wrote James W. Loewen in Lies My Teacher Told Me. “Jefferson Davis denounced states’ rights as destructive to the Confederacy. The mountainous counties in western Virginia bolted to the Union. Confederate troops had to occupy east Tennessee to keep it from emulating West Virginia. Winn Parish, Louisiana, refused to secede from the Union. Winston County, Alabama, declared itself the Free State of Winston. Unionist farmers and woodsmen in Jones County, Mississippi, declared the Free State of Jones.”

By February 1864, Davis despaired: “Public meetings of treasonable character, in the name of state sovereignty, are being held.” Thus states’ rights as an ideology was contradictory and could not mobilize the white South for the long haul.

What mobilized the white South was the defense of slavery. Falwell and his new breed of confederate aren’t doing that, of course, but the spirit of treason, if not the act of treason, is the same. Conservatives tell us they prefer slow and gradual change, and stand united against radical attempts to bring it swiftly. But that’s not their true face. Conservatism in practice is a radical ideology reserving the right to betray its stated principles, and to betray community and brotherhood, if it doesn’t get what it wants.

Thanks to Jerry Falwell Jr., that’s now easy to see.