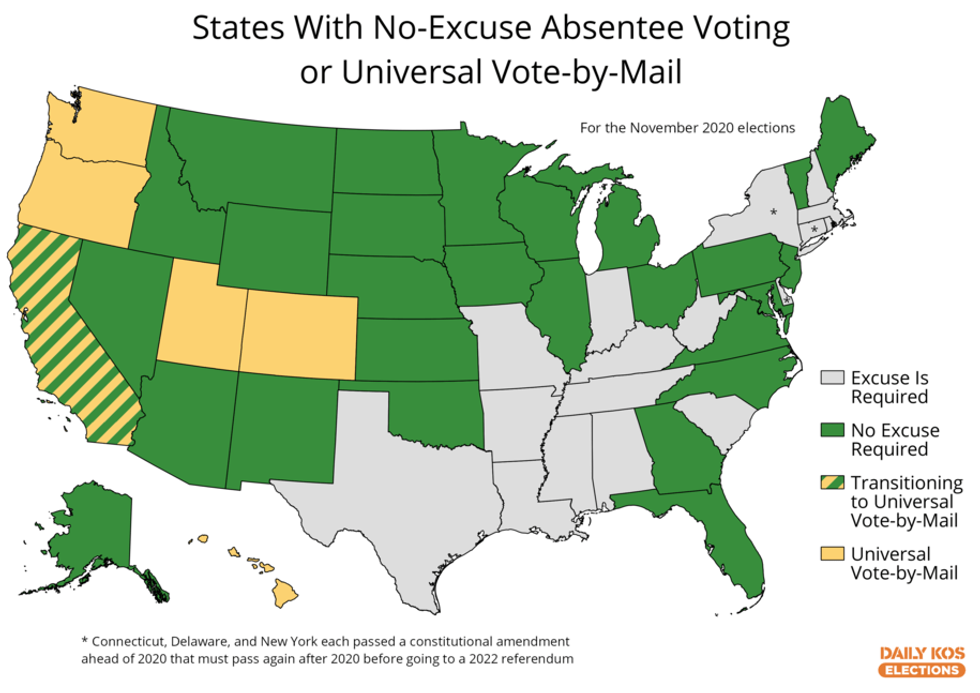 As the coronavirus outbreak increasingly becomes a pandemic, schools, public events, and public services are shutting down as government authorities such as the Centers for Disease Control urge people to distance themselves from those who could spread the disease. Thanks in part to Donald Trump lying to downplay the impending crisis for his own self-interest, the virus threatens to create major disruptions in many aspects of life and risk the lives of countless Americans. This is why it's critical that we take steps as soon as possible to ensure that November's election runs smoothly, and every state should adopt universal voting by mail.

Universal vote-by-mail works by having every registered voter mailed a ballot that they can return by mail, and, in exchange, states and localities can operate far fewer in-person voting locations and require far fewer poll workers to operate them. Ideally, the postage on ballots is prepaid, and voters have ample opportunities to cast their ballot without hassle. This includes being able to return one’s ballot by mail as late as Election Day or to return it in person at one of numerous drop box locations around their local government jurisdiction, as well being able to access a limited number of in-person voting locations for those who still want to vote that way or are physically unable to do so by mail.

As shown on the map at the top of this post (see here for a larger version), Colorado, Hawaii, Oregon, Utah, and Washington have already transitioned to universal voting by mail ahead of November's elections, and states such as California and Arizona have seen a majority of voters cast their ballots by mail in recent years. Furthermore, states such as Michigan, Pennsylvania, and Virginia have made it considerably easier to vote absentee by mail since the last election. But a large number of states still don’t even allow absentee mail voting without an excuse, let alone mail every registered voter a ballot as the default voting method.

Adopting universal voting by mail is imperative as the coronavirus threatens to become a pandemic. As governments urge citizens to avoid crowded public spaces and to vigilantly wash their hands, having millions of people stand in lines on Election Day and use the same voting machines or even the same pens to fill out paper ballots threatens public health and could dampen voter turnout. Furthermore, because poll workers are very disproportionately the same elderly Americans who are most at risk in a flu pandemic, states and localities may have trouble finding enough poll workers, and those who do show up will be at greater risk of catching or spreading the disease.

These problems should be largely avoidable with universal voting by mail, since it almost entirely eliminates in-person voting and the public gatherings that go with it. Furthermore, vote-by-mail is a cost-saving measure that frees up resources for other things because governments have to operate far fewer in-person polling places. It also has a long track record of increasing voter turnout in the states that have adopted it thanks to the ease of voting that way, especially with prepaid postage negating the need for voters to go to the post office.

Of course, voting by mail is not a silver bullet, either for increasing voting access or for mitigating viral outbreaks. Indeed, Washington’s secretary of state has urged voters not to lick their ballot return envelopes to seal them and instead use an alternative such as a sponge to moisten the envelopes to avoid having those handling the ballots come into contact with potentially infected saliva. However, by taking action as soon as possible, states could heavily expand absentee voting or fully shift to vote-by-mail to both improve how elections operate and protect voters and the integrity of the process itself from the impending pandemic.