Frozen primary: How Bernie’s political revolution can get back on track 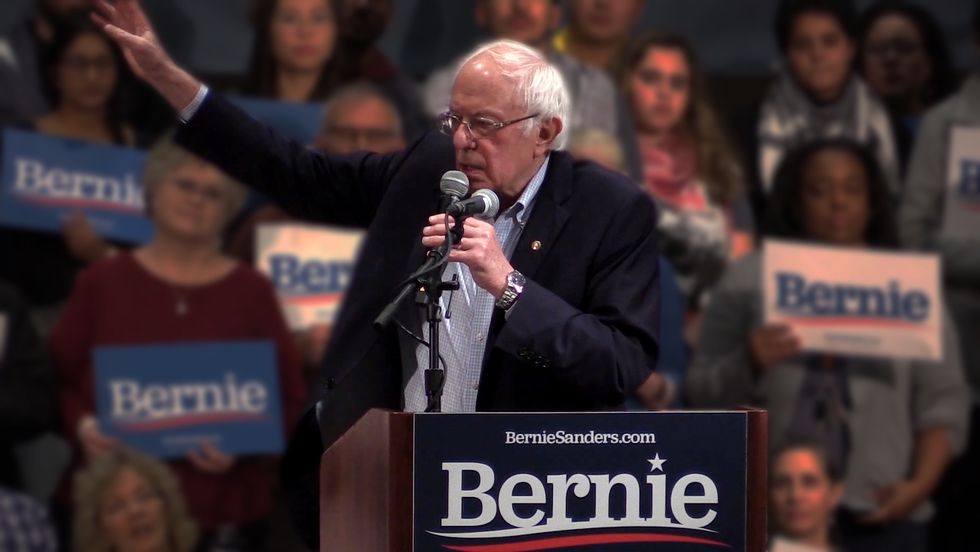 Bernie’s original sin was to commit himself wholeheartedly to the Democratic party, after endorsing Hillary Clinton and refusing to run as an independent in 2016. Having joined the leadership ranks, he was compelled to be a participant in their counterproductive distractions, namely Russiagate, Mueller and impeachment, while simultaneously gearing up for a 2020 campaign based on the purity of ideas. He unilaterally disarmed himself against the most devious strategies deployed against him, with the DNC tipping the scales so heavily for its favored establishment candidate, aided by voter suppression even more blatant and widespread than in 2016.

How do you advance a political revolution after positioning yourself as a leading member of the party that is the antithesis of the revolution?

The coronavirus is a divine intervention that can yet help Bernie straighten his course. It’s a total reset, in a fast-moving era when a campaign needs to reinvent itself several times over within the same cycle. Trump expertly ran at least three different campaigns to win, yet Bernie has run the same one, focused on maximizing voter turnout from typically non-voting populations. That campaign definitively ended on Super Tuesday, though the warnings were there even in earlier states, when rural white voters went for Buttigieg in Iowa, the winning margin in New Hampshire sharply eroded from 2016, and Biden came in second in Nevada. Some constituencies, such as young Latinos, were dramatically solidified, along with young voters in general, while others, including African Americans, older white voters, and rural voters, receded.

By no means is this campaign over—not by a long shot. On the contrary, the coronavirus is a transcendent opportunity to finally put the Sanders campaign of the past three years behind us (until parts of it can be resurrected for the general election), and to aim fire directly at those responsible for the last economic crash and the terrible mismanagement of its aftermath.

And in Joe Biden, Bernie has the perfect foil. Before the coronavirus escalation, Biden leaked Jamie Dimon’s name as possible treasury secretary. Dimon is one of the all-time great Wall Street crooks, with JPMorgan Chase, the bank he headed, fined $13 billion for irregularities leading to the crash. Biden’s coziness with Dimon crystallizes the ignominious collusion of the Democratic party with plutocratic interests. It shows that the establishment continues to stay in lockstep with the fomenters of crises that ruin working people’s lives.

The immediate strategic task now is to freeze the primaries where they stand, deploying resources beyond the formal electoral process, at rough parity between Sanders and Biden. How can next Tuesday’s primary contests in Arizona, Florida, Illinois and Ohio possibly go forward when Louisiana has chosen not to go aheadand later states will probably fall in line? Are we meant to go through with a half-hearted exercise, campaigning having essentially ended? Would the party be as enthusiastic to short-circuit the primary if the coronavirus crisis had occurred two weeks earlier, when Bernie was ascendant?

The Sanders campaign should float the idea of postponing all the remaining primaries to a month before the convention for a national primary day. It is critical to ask for this before next Tuesday’s primaries go ahead anyway and allow the party the opportunity to prematurely end the process.

Meanwhile, the Sanders campaign is acting brilliantly in letting obvious side-by-side contrasts develop between Trump’s initial MAGA response to the “foreign virus”and Biden’s knee-jerk neoliberal reliance on personal responsibility, both of which starkly stand out against Bernie’s unmistakable message of compassion embodied in rejuvenated dedication to public goods and values.

It might help if the Sanders campaign were to release not only their preference for vice president but potential cabinet members as well, and deploy them all over the airwaves, in what needs to become a prolonged digital campaign for the next three months. They can all defend the Sanders philosophy of social welfare, for which the coronavirus provides the ideal test case.

Before the coronavirus intensification, I would have suggested Tulsi Gabbard as Sanders’s vice president, to inject some much-needed appeal to white rural and working-class voters, some of whom have perhaps been lost permanently to Trump. The anti-war message was a strong part of Sanders’s 2016 appeal, but it has faded because of closer party affiliation. Gabbard should still be a critical part of the leadership, yet someone like Oregon Sen. Jeff Merkley suits the bill much better at the moment. A progressive with the bona fides to fight the kinds of Wall Street giveaways we’re likely to see more of from Trump and Biden, as well as the bearing to reassure suburban and rural voters, Merkley can be a powerful surrogate. Before Super Tuesday I would have recommended Rep. Barbara Lee of California, but the time for that seems to have passed.

Merkley and Gabbard, along with Rep. Jesus “Chuy” Garcia or Rep. Raúl Grijalva as potential point people for coordinating the combined health and security crisis, should help return Sanders to his more resonant 2016 message. To listen now to his debates with Hillary Clinton is to realize how different Sanders sounds today. With his calls for fighting corruption, enacting campaign finance reform, contesting the influence of big money, creating 13 million new jobs in infrastructure rebuilding, implementing paid family and sick leave, breaking up big banks, and creating jobs, jobs, and jobs with little mention of democratic socialism, Sanders sounded more like a conventional progressive Americans know from our history. He sounded more like Elizabeth Warren, who stole that lane from him for 2020, than today’s confused millennial socialists.

It was Sanders’s decision to be so loyal to the party that permitted the rise of Elizabeth Warren, who copied some of his 2016 platform, yet sharply diluted it by adding neoliberal means-tested elements to Sanders’s universality. Yet the path is clear now to return to an anti-war and pro-civil liberties language, of which vigorous opposition to ongoing voter suppression is certainly a huge part. Sanders had the same ideas in 2016 as he does in 2020, but the plainspokenness has sometimes been lost to a fashionable socialism beloved of urban hipsters.

The coronavirus should easily play into the idea that Biden is not electable, Sanders’s best bet for his own case. He should explicitly reject the idea that Biden is electable, not just suggest that he’s more electable. Sanders’s loyalty to the party has gotten in the way so far, but he should go all-out to argue that when Biden was vice president the administration bungled its response to the economic crisis, and that Biden already shows every sign of repeating the error, with even graver consequences.

Nobody is more closely associated with the loathed Wall Street bailout of 2008 and thereafter, which involved, according to the audit demanded by Sanders, $16 trillion in secret loans, instead of investing in reconstructing America. Because of Biden’s enthusiasm for the assault on Iraq, trillions were invested in futile warsrather than strengthening America’s capacity to respond to health and economic crises. Biden’s lifelong support for financial deregulation unleashed Wall Street on poor people, creating an inequality and debt burden that assured collapse, which seems to be happening again. The inadequate response, in the form of a half-hearted Dodd-Frank bill that has already been eviscerated by Trump, didn’t go nearly far enough to prevent another, even greater, crash. And the Affordable Care Act is deficient precisely in meeting a crisis like coronavirus, leaving 27 million people uninsured and 87 million more underinsured.

During the course of what will hopefully turn into a prolonged opportunity to take a fresh look at the two remaining candidates while the real-time crisis unfolds, Sanders should continue promising guaranteed health care for all Americans as soon as he takes office. He should swear to make it his first order of business, because his experts have already figured out how much it will cost and who will pay for it—namely, the very people Biden wants to run yet another de facto Wall Street administration.

The coronavirus is a kind of divine intervention bringing everything down to earth. The Sanders movement had unfortunately become too invested in fanciful terminology rather than relying on the plain language of compassion, care and love which was always its strength, certainly in 2016 when the establishment’s heartlessness was exposed. To have become involved in demonizing Trump, which has been the Democratic party’s entire raison d’être for the last four years, has sidetracked Sanders from appealing to voters who should really still be his, not Biden’s.

To freeze the primary where it stands, at formal delegate parity, and to extend the contest until the convention, provides Sanders the opportunity to make the case that the coronavirus and a possible economic crash are exactly why we can’t indulge in the bout of fake nostalgia Biden represents. Sanders’s grassroots political revolution at last has a chance to play out in real time, with actual rather than rhetorical stakes.