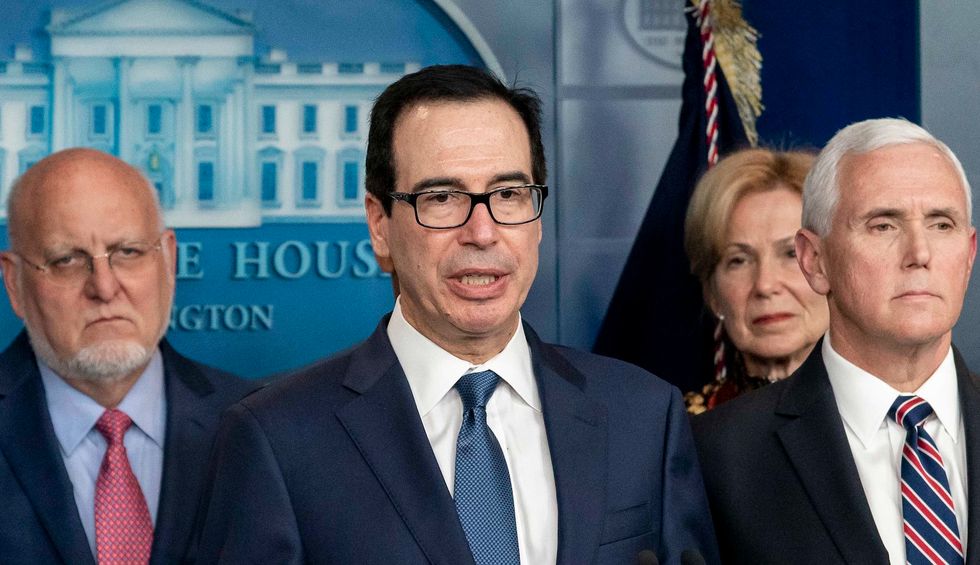 Treasury Secretary Steve Mnuchin, the former Goldman Sachs banker Congress is about to entrust with overseeing a $4.5 trillion corporate bailout fund, said Thursday that the record-shattering surge in jobless claims last week due to the coronavirus crisis is "not relevant" to the health of the economy and insisted that businesses will soon be able to "hire back those people."

Asked about the news Thursday that 3.3 million Americans filed for unemployment benefits last week, Mnuchin said in an appearance on CNBC that President Donald Trump is "protecting those people."

"To be honest with you I just think these numbers right now are not relevant," said Mnuchin, showing what critics denounced as a callous lack of regard for the economic pain of millions of people.

"They're going to give nearly unchecked power to dole out trillions of dollars to a guy who just called over 3 million new unemployment claims 'not relevant,'" tweeted progressive talk show host John Iadarola.

Mnuchin said he hopes "those workers will be rehired" and pointed to temporary protections for the unemployed in the stimulus legislation that passed the Senate Wednesday night.

Consumer advocacy group Allied Progress said the comments are "not surprising coming from Steve Mnuchin, the 'Foreclosure King' of the last recession," referring to the nickname progressives gave Mnuchin after his destructive tenure as CEO of OneWest Bank.

Not surprising coming from @stevenmnuchin1, the “Foreclosure King” of the last recession. Maybe not the right guy… https://t.co/OOaIMH59ZX
— Allied Progress (@Allied Progress) 1585233040

As HuffPost's Amanda Terkel and Zach Carter wrote Thursday, Mnuchin's claim that businesses will soon be able to rehire the millions of workers who filed for unemployment last week "is wishful thinking, to put it mildly."

"Despite its big price tag, economists believe the legislation passed by the Senate on Wednesday is far too modest to meet the scope of the coming economic crash," wrote Terkel and Carter. "The $349 billion the legislation sets aside for small businesses will be exhausted quickly, but experts also believe that it will take months for the aid to reach most small firms. During that time, many of them will simply fail, and you can't rehire workers if you don't have a company."