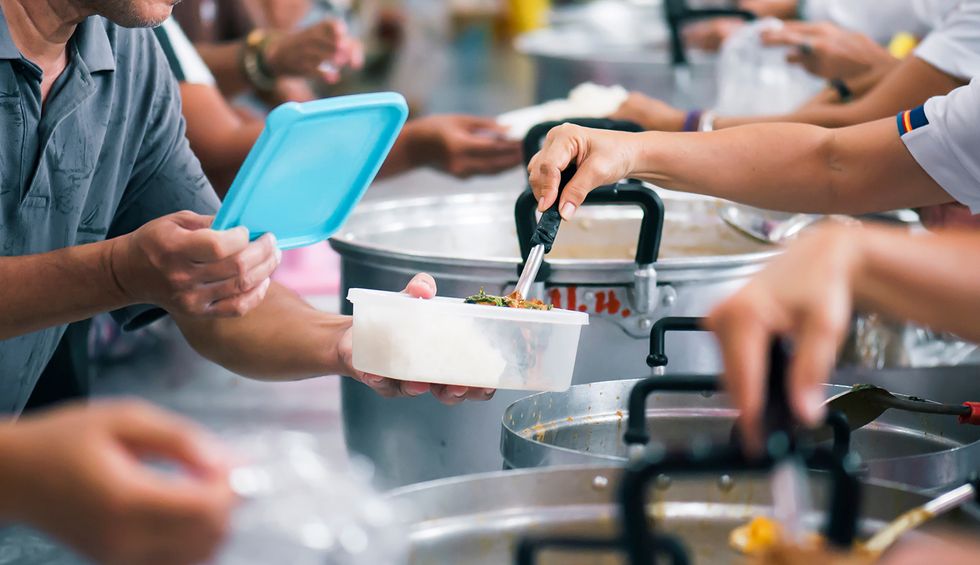 As most states across the country are holding citizens to a "stay at home" order, temporarily shuttering non-essential businesses, it's still business as usual for the essential ones—like grocery stores, restaurants, and drug stores. Yet as vital businesses open during a pandemic, often full of shoppers coming in contact with merchandise, the workers who are staffing them face far greater risks at their jobs than they did a mere month ago. Now, unprecedented and dangerous conditions are creating fear and anxiety among a class of workers who, until recently, were given very little in the way of social capital from the general public.

In the Pacific Northwest, fast-food chain Burgerville has put 68 percent of its workforce on furlough after changing its operation to a drive-thru and delivery-only restaurant. Yet according to workers, the understaffing is forcing them to work in unsafe working conditions, which led to a one-day strike at a Portland location this week. The Burgerville Workers Union (BVWU) is demanding a $2 an hour raise for hazard pay, an additional two weeks of paid sick time to allow workers to stay at home if they fall ill from COVID-19, along with two weeks severance. BVWU is recognized as a union, but has been in negotiation with the company for about two years.

Mark Medina, an employee at a Burgerville in Portland, told Salon in an interview that they're working with a "skeleton crew" right now — which makes it "utterly impossible" to guarantee the safety of the coworkers and the community in this crisis, he says.

"You just can't do the safety checks that you have to, working under the kind of regimen that they are wanting," Medina told Salon. "In the middle of this, the company is refusing to acknowledge any of the concerns of workers, and continuing to do everything unilaterally."

Medina said safety checks — like monitoring food temperatures, changing gloves, and maintaining a distance from each other of six feet — is much harder with a slimmer staff. It's not only causing  "low morale," but it's just not "doable," especially considering the orders they are receiving.

"They're ordering the kinds of orders as if it was their last meal, you know you're getting like 20 cheeseburgers and 13 fries," Medina says. "In order to do that safely, in the way that it says in the handbook and CDC is telling us to do it, you can't do it quickly enough with three workers."

Medina said if Burgerville is an essential service, they should be granted hazard pay — and they are not the only food service workers with that demand. Workers at Trader Joe's are asking for hazard pay, too. In a campaign launched by the Trader Joe's Union coalition, a statement expressed fear and concern about working during this time. "We are exposing ourselves (and our loved ones) to COVID-19," the statement read. "We aren't being paid for the extra work we're doing or the risk we're undertaking. We're being told we can't wear gloves. We are terrified."

The concern is certainly warranted as reports continue to surface about workers at grocery stores testing positive for COVID-19. In Seattle, a Trader Joe's employee tested positive. So did an employee of King Soopers in Denver. An employee at a Whole Foods in New York City got the coronavirus, too.

An employee at a Whole Foods in California, who asked to remain anonymous for fear of reprisal, told Salon that while he is happy with some light measures that the grocery store has taken to protect workers and customers, but that the company has not responded well to other basic measures like wearing masks.

"[Management] is pushing the fact that [masks] not really effective, unless you are trained and using the right mask so they say it's better to just not have them," the Whole Foods employee, who has an immunocompromised family member at home, told Salon. When the employee asked his manager if he could wear a mask, he was dismissed. The employee then went to HR, who, he said, was more understanding.

In the store, he said, it would be nice if they could have a staff member to tell customers to maintain a six-feet distance from workers and each other.

"Just . . . have people at the door being like, 'please don't crowd up a worker who is trying to stay healthy, so that they can keep stocking the shelves, so that you can keep eating, because you might be sick, and you might make them sick,' like there's seems to be none of that," the employee said. "And that's I think would be the main thing that would make me feel safe."

Brenda Sanchez, who works as a sales manager at Ralph's in Moorpark, California, told Salon there are hand sanitizers at every cash register at the store she works at, as well as sanitary wipes and hourly announcements for front-end employees to wipe down counters that are frequently touched. They are supplying disposable gloves to employees, and the bathrooms are frequently replenished with soap and toilet paper. However, Sanchez said there is some concern about working in-person with so many strangers each day.

"We're still kind of worried and stressed about what exposure that we have every day," Sanchez said. "And, of course, there's some people that are just very thoughtless — they don't cough in their sleeve, they don't keep their distance."

"We've had to put tape and reminder signs saying keep six-feet back behind the next person," she added.