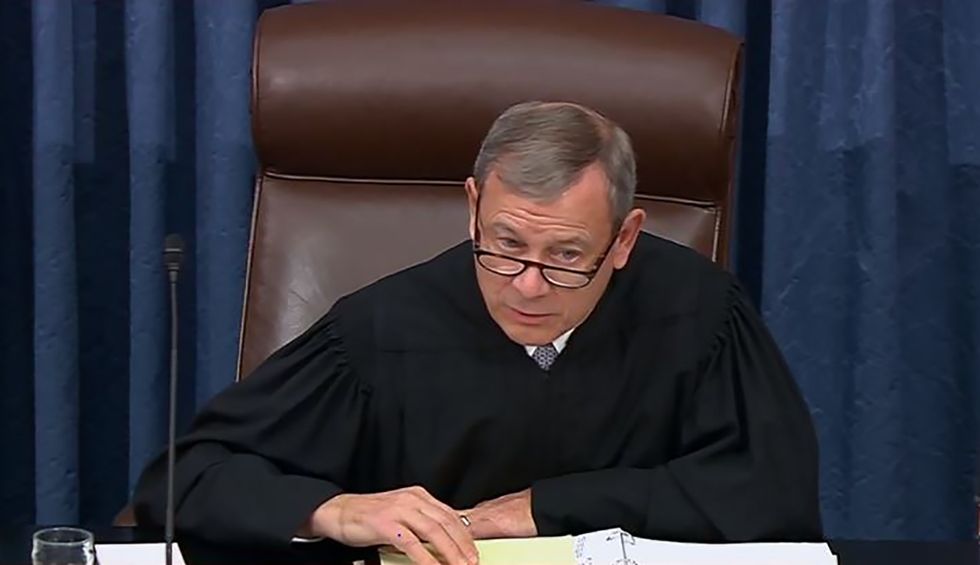 In the right-wing media, the term “activist judges” is often used to criticize judges who make decisions that the far right doesn’t like — although far-right pundits never use that term to criticize judges who make decisions that are favorable to large corporations or anti-abortion groups. Even some progressive judges are afraid of being accused of liberal bias, but U.S. District Court Judge Lynn Adelman obviously isn’t one of them. In an article for the Harvard Law Review, Adelman calls out right-wing biases in the judiciary  — and one of Adelman’s targets is U.S. Supreme Court Justice John Roberts.

“The Court’s hard-right majority is actively participating in undermining American democracy,” Adelman asserts in the Harvard Law Review. “Indeed, the Roberts Court has contributed to insuring that the political system in the United States pays little attention to ordinary Americans and responds only to the wishes of a relatively small number of powerful corporations and individuals.”

In the article, Adelman slams the High Court’s right wing for striking down part of the Voting Rights Act and for being hostile to unions and favorable to large corporations. And the judge notes how the Supreme Court, in 2020, is so much more right-leaning than it was in the days of the late Chief Justice Earl Warren.

Nominated by President Dwight D. Eisenhower, Warren was a Republican. But many of his rulings did a lot to advance the cause of liberalism in the United States, and the Christian Right has been vehemently critical of him.

Adelman notes that in recent years, the Supreme Court’s right-wing justices have done a lot to undermine the progressive rulings that the Warren Court made in the 1950s and 1960s.

“Democracy is inherently fragile, and it is even more so when government eschews policies that benefit all classes of Americans,” Adelman asserts. “We desperately need public officials who will work to revitalize our democratic republic. Unfortunately, the conservative justices on the Roberts Court are not among them.”

Adelman’s article has received a rave review from journalists Dahlia Lithwick and Mark Joseph Stern. In a March 10 article for Slate, they applaud Adelman for a “willingness to really go for broke in criticizing conservative bias in the judiciary.” And the Slate journalists note the double standards that exist among far-right pundits.

“When Justice Clarence Thomas just last year used a dissent to attack the integrity of a sitting federal judge in the census case,” Lithwick and Stern write, “it was mere clever wordsmithing. But when Justice Sonia Sotomayor suggests, as she did recently, that the conservative wing of the High Court seems to be privileging the Trump Administration’s emergency petitions, she is labeled — by the president himself — unfit to judge. It’s such a long-standing trick, and it’s so well supported by the conservative outrage machine.”

But Adelman, the Slate journalists stress, refuses to be manipulated by that “conservative outrage machine.” And they love the fact that Adelman outlines how far the High Court has moved since its Earl Warren era.

“The article ultimately portrays the slow movement of the Supreme Court to the right — and then the far right — through a long line of cases that reversed the Warren Court’s protections for minority groups and poor and working-class Americans,” Lithwick and Stern explain. “It shows how the Court has undermined unions and boosted corporate interests.”