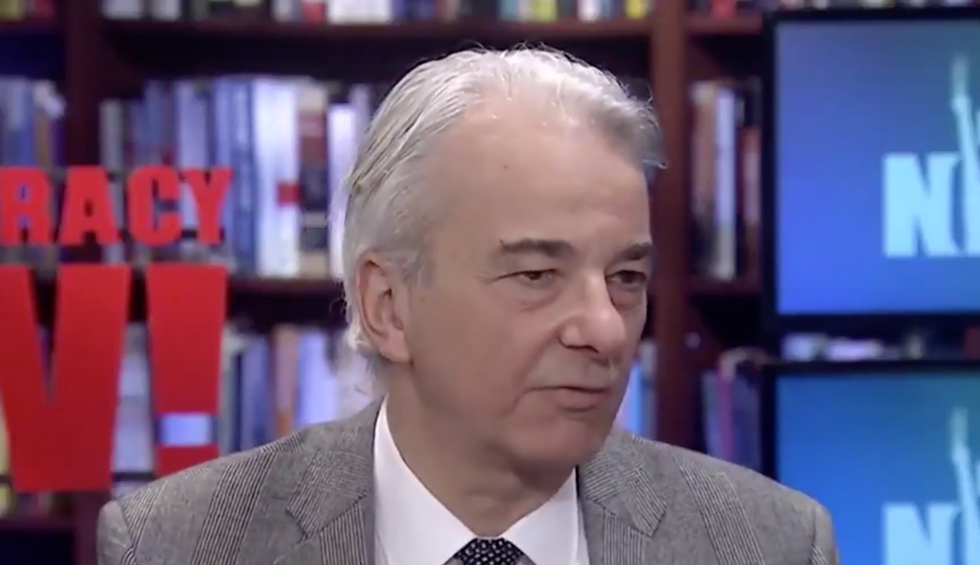 The entire country of Italy has been placed on lockdown in an attempt to stop the spread of the COVID-19 coronavirus, impacting 60 million people. People in the nationwide Red Zone will only be allowed to travel for work, medical reasons or emergencies until early next month. All schools and universities will also remain closed, major sporting events are suspended, and airline passengers now have to justify their reasons for traveling. We go to Italy to speak with Romy Kool, an international student at Bocconi University in Milan, where courses are now being taught online amid the coronavirus outbreak. We are also joined by epidemiologists Thomas Bollyky with the Council on Foreign Relations and Alfredo Morabia, professor of epidemiology at the Barry Commoner Center for Health and the Environment at Queens College, City University of New York, and editor-in-chief of the American Journal of Public Health.

JUAN GONZÁLEZ: We turn now to Italy, which has announced a lockdown for the entire country of 60 million people in an attempt to halt the spread of coronavirus. In an unprecedented move, Italian Prime Minister Giuseppe Conte extended regional emergency coronavirus measures, including strict travel restrictions.

PRIME MINISTER GIUSEPPE CONTE: [translated] I am about to sign a decree that we can describe as “I stay at home.” There will not be any more zone one or zone two in the country. It will be Italy. Italy, a protected zone. All movement across the country is to be avoided unless motivated by three specific circumstances–reason of work, reasons of necessity or health reasons. Believe me, it isn’t easy. I am completely aware of the seriousness of these measures for the whole country. But I am forced to intervene in a more determined manner.

AMY GOODMAN: Italy is Europe’s worst affected country, as far as we know, with Reuters reporting some 9,172 confirmed cases and 463 deaths on Monday. The emergency crackdown measures are the most stringent since World War II. People will only be allowed to travel for work, medical reasons, emergencies until early next month. All schools and universities are also closed until that time. Major sporting events are suspended. Passengers at Italy’s airports now have to justify their reasons for traveling, as will those attempting to enter Italy. The Italian Parliament will now convene just once a week.

For more, we go to the Red Zone. We’re joined in Milan, Italy, by Romy Kool, an international student, where courses are now being taught online amidst the corona outbreak. Also with us, Thomas Bollyky, director of the global health program, Council on Foreign Relations, and Dr. Alfredo Morabia, professor of epidemiology at Queens College, City University of New York, and head of the American Journal of Public Health. Romy, you’re in Milan right now. Tell us what university you go to. What is the climate? What does it mean to be under total lockdown?

ROMY KOOL: Hello. I am actually in Padua right now. I study in Bocconi University in Milan but I went to my family once the whole chaos started about two weeks ago. This chaos has created runs on the supermarket, pasta, rice, masks and hand sanitizer to go completely out, as well as, as you said, that all my classes and my university campus has been closed.

JUAN GONZÁLEZ: What do you do day to day, in terms of being able to go to the store or—I assume that most restaurants have nobody eating in them, but in terms of the everyday necessities that you have to deal with?

ROMY KOOL: Yes. So our bars and restaurants have now created a time limit so they close at 6:00 or 8:00 p.m. at night instead of going on. As for supermarkets, they have been open so far but now there have been stricter rules. So if you go outside, you normally send one person in the family, and you can get stopped on the street by police and they can ask you your reason for being out of the house.

ROMY KOOL: At first, there was a lot of shortages on, like I said, pasta, rice and durable products. When I was in Milan, it was completely sold out of everything and the supermarkets were crazy. Now it has calmed down a little bit and everything is restocked. But again, hand sanitizer and masks are impossible to find. As for the hospital, if you show that you have symptoms, serious symptoms of the coronavirus, you can be tested, but otherwise, they will not test you for no reason. And they also prefer that people stay outside the hospitals to not create a very tight space and to increase the spread of the virus.

AMY GOODMAN: I wanted to bring Dr. Thomas Bollyky back into the conversation. Professor Bollyky, if you can talk about the approaches that Romy is talking about in Italy, but also not only around Europe but in Africa. What you think are the most effective policies for countries to take and how extreme is this? Italy on total quarantine now, not even just the north where Romy Kool is.

THOMAS BOLLYKY: It’s an extreme measure, for sure. Quarantining 60 million people, it now seems like it would not be such a large number given that China had locked down on residential movement restrictions on 760 million people, but 60 million people under quarantine is a significant effort. What we have found from the early studies to come out about China’s response and estimating which were more effective, it really does seem to be the social distancing policies, which can be done without restricting human rights. So the banning of public gatherings, the banning of public transport, closing of schools in affected communities—those seem to be really the effective policies, and frankly, for the communities in the U.S. where we are starting to see community spread, the kind of policies we should consider.

THOMAS BOLLYKY: From a public health perspective, it is going to be a balance. For affected communities, it is time to start to consider wherever possible canceling large gatherings. We are seeing community spread. Obviously, that is a decision that’s going to be made, appropriately so, at the state and local level, and they should do that. But in places where we are seeing community spread, it is a strategy that people are looking at. As I understand it, the issue with the New York public schools is that there are a significant number of students that rely on these schools for lunch and for broader sources of support. That’s its own problem that schools are the only avenue for which that is available, but is part of the reason that people are taking a more balanced approach and only, as I understand it, from the New York public school system, canceling school as a measure of last resort.

AMY GOODMAN: And the colleges like CUNY—you’re a professor Queens College, Dr. Morabia—they also are not closed. But also I just wanted to ask one thing about paid sick leave. President Trump talked about different initiatives yesterday but said they are unveiling a whole array of them today. Not clear if that will happen. He also said a million tests would be administered by last Friday; it’s estimated somewhere around 4,000 have been. But CUNY hasn’t closed either.

DR. ALFREDO MORABIA: Well, it’s important to do this progressively. You understand we have to slow down the progression. So where there are risks, people are quarantined, 15 days, three weeks, sometimes a whole city, but the progression is slowed down so that our system is not overwhelmed, OK? So it can be done in different ways.

AMY GOODMAN: But the issue of paid sick leave—President Trump did not mention that. What so many people when they are told by Vice President Pence and others “Just stay home if you are sick.”

DR. ALFREDO MORABIA: Absolutely. The paid sick leave is a very important component. I think that’s where we are vulnerable. I’m not so worried about the scientific aspect component of it, of our response of our medical system. Even though it is really stretched thin because of lack of resources, but I think we can handle this. The problem is our social vulnerability. The fact that even if you have the resources, people don’t access.

And again, this woman was talking about what’s happening in Italy, people rushing on pasta and rice. It is part of the distrust in science that have been fed over all those years. If scientists had their proper role, if there were no systematic attacks against CDC, the surgeon general, the human and health services, all of those agencies that are here supposed to protect the population, we would be in a much better shape.

JUAN GONZÁLEZ: I want to ask Romy Kool, many of the universities now in Italy are going to online education. How is that working out compared to your in-face classes?

ROMY KOOL: At first, we had slides, and now we have YouTube videos being uploaded by our teachers giving lectures. My siblings are in a high school and they actually have live lectures to allow interaction with the teacher and questions, which is one thing we have not gotten yet, but we are heading there.

AMY GOODMAN: We want to thank you all for being with us. Romy Kool, speaking to us from Padua, from Northern Italy. All of Italy is on lockdown. She’s an international college student there. Dr. Alfredo Morabia, head of the American Journal of Public Health. And Thomas Bollyky, thanks for joining us, from the Council on Foreign Relations.

When we come back, prison riots in Italy, 70,000 prisoners released in Iran, New York prisoners making hand sanitizer that, well, maybe they won’t be able to use themselves because of its alcohol content. We look at coronavirus in prisons and then in detention centers. Stay with us.