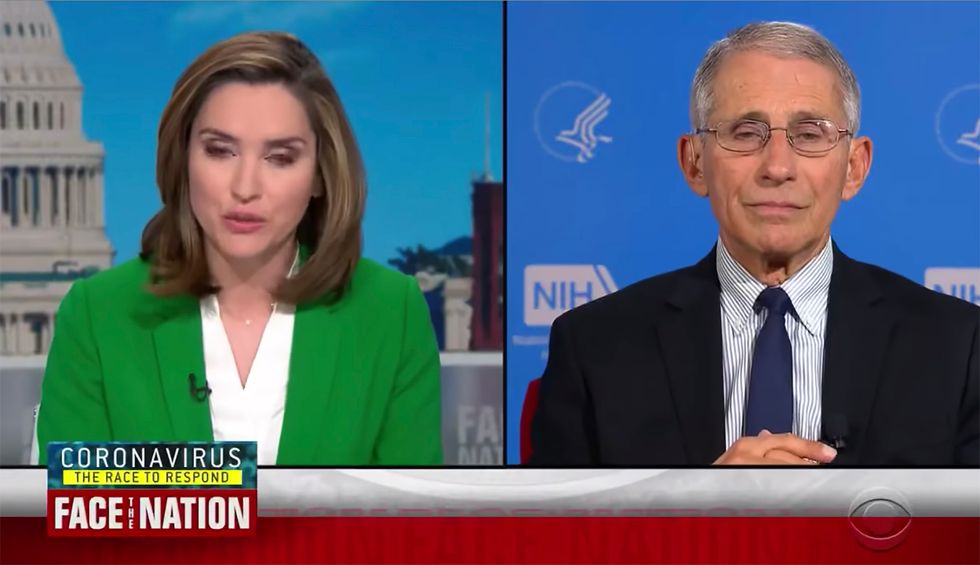 Dr. Anthony Fauci, the top infectious disease expert at the National Institute of Health, suggested on Sunday that President Donald Trump sometimes spreads misinformation about the novel coronavirus because he is a “hopeful layperson.”

Fauci, who appeared to be exhausted, told host Margaret Brennan on CBS’s Face the Nation that the U.S. may not follow the path of Italy on coronavirus infections and deaths.

“We don’t know why they are suffering so terribly,” Fauci said. “But there’s a possibility and many of us believe that early on they did not shut out as well the input of infections that originated in China and came to different parts of the world.”

“It is conceivable that once you get so many of these spreads out — they spread exponentially and you can never keep up with this tsunami,” he continued. “And I think that’s what, unfortunately, our colleagues and our dear friends in Italy are facing.”

Brennan pressed Fauci about why President Donald Trump had suggested that certain drugs were effective at combating COVID-19 even though his claims are not backed up by science.

“Okay, Margaret, there’s an issue here of where we’re coming from,” Fauci replied. “The president has heard — as we all have heard — what I call anecdotal reports that certain drugs work. So what he was trying to do and express was the hope that if they might work, let’s try and push their usage.”

“I, on the other side, have said, I’m not disagreeing with the fact that anecdotally they might work,” he added. “But my job is to prove definitively from a scientific standpoint that they do work. So I was taking a medically, purely scientific standpoint and the president was trying to bring hope to the people.”

Watch the video below from CBS News.