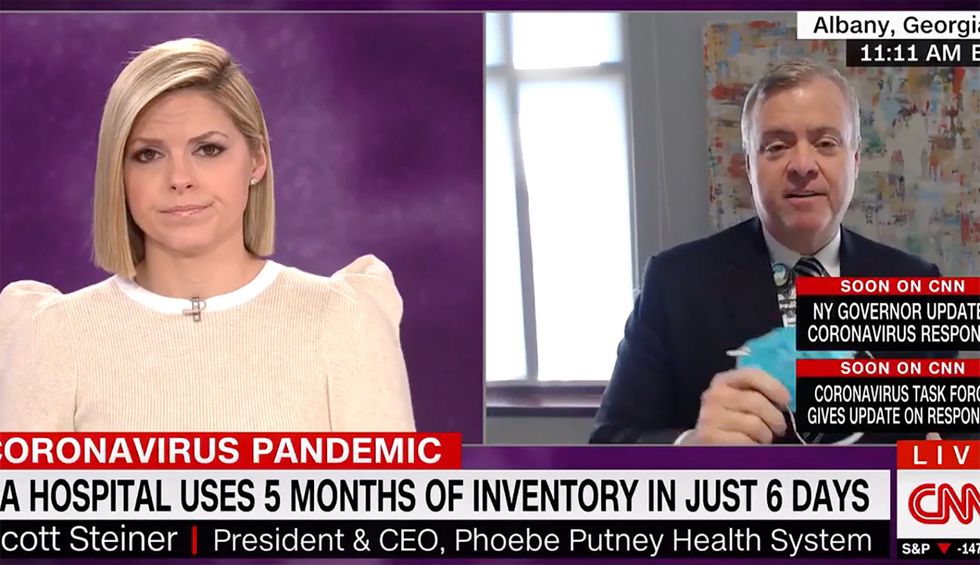 A previous version of this article incorrectly identified the CNN reporter in this interview as Brianna Keilar; the reporter was Kate Bolduan, not Brianna Keilar.

In the United States, health officials are not only worried about the fact that the Trump Administration was painfully slow to push for coronavirus testing — it has also been slow to help hospitals prepare themselves for the surge of critically ill patients they are likely to be inundated with in the weeks and months ahead. Scott Steiner, CEO of Phoebe Putney Health System in Southwest Georgia, is well aware of how bad things could get — and during an interview with CNN’s Kate Bolduan on Wednesday, March 18, he described the extremes hospitals are already going to in his state.

According to Steiner, his team went through five months of supplies in only six days. And he explained how that happened.

“Yeah, really started last Tuesday,” Steiner told Bolduan. “We have been standing up our command center for quite some time, waiting for this. We have been waiting for the coronavirus to hit the United States. We have been overbuying supplies, but until it truly does, you don’t quite realize what you’re going to be going through. We began to see our influx of patients last Tuesday and last Wednesday.”

Steiner went on to say, “We have gone through five months — now six months — worth of supplies in less than a week. And we are scrambling. We’re scrambling.”

Steiner cited N-95 masks as crucial to the wellbeing of hospital workers, stressing how many of them he needs.

“We have got three days of supply of N-95 masks on hand,” Steiner told Bolduan. “In order to preserve these and get them to last longer, we have a team of people sewing masks together. This is surgical sheeting, and this is our prototype. We’ve got about 3000 of these made. We believe we can make 200,000 of them. It will take a few weeks, but this is kind of what we’re having to do because we don’t know when that next shipment is coming.”

Steiner described the type of struggle his he is facing in his efforts to maintain sufficient supplies.

“The N-95 is a filtered mask; it keeps out staff safe…. It is critical,” Steiner told Bolduan.

Keilar asked Steiner to elaborate on the type of “dire situation” he is “actually up against.”

“Every hospital is looking at how many days on hand you have of masks, gowns, gloves, eye protection,” Steiner observed. “We have bought eye protection off the shelves of local stores. We have reached out; we have an incredibly supportive community. And I will tell you, our political, our governmental leaders — I know they're all supportive. They really want to do the right thing. But I can tell you: we were just looking at a sourcing these out of a company out of Mexico, and they want $7 per mask. They have a million of them in hand, and this is a mask that normally would cost us 58 cents. But I would tell you: we’re probably going to go ahead and take them for $7 each because we’re that desperate.”