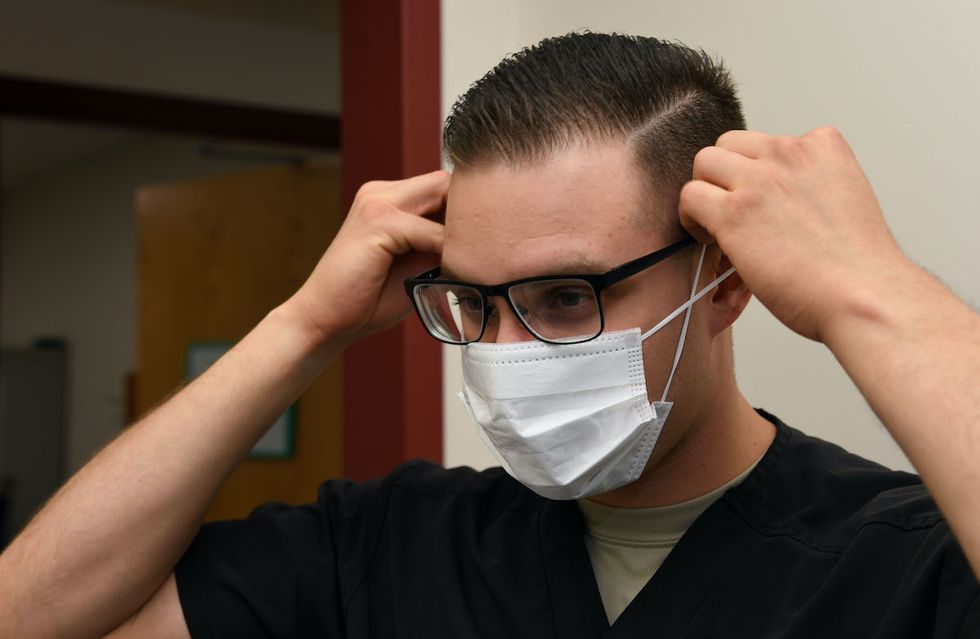 We begin with news on the coronavirus pandemic. The death toll in Italy has soared to at least 366 — with over a third of the deaths recorded within the last day. Authorities have now put around 16 million people on lockdown in the north of the country as they attempt to contain the fast-growing pandemic. All schools nationwide have been ordered closed. Pope Francis delivered his Sunday sermon via live stream after the Vatican acknowledged its first case of coronavirus earlier in the week.

In Saudi Arabia, the east of the country has been put on lockdown, and schools nationwide have been closed. Iran has confirmed at least 49 new deaths on Sunday, bringing its death toll to just under 200. In Quanzhou, China, a hotel that was used as a coronavirus quarantine center collapsed Saturday, killing at least 10 people. It is not known what caused the collapse. Over 106,000 people have confirmed cases of the disease worldwide, with around 3,600 dead.

Here in the United States, there is growing outcry over the Trump administration’s mismanagement of the outbreak and the lack of access to tests. Known cases of coronavirus now exceed 500, with 22 recorded deaths. At least 19 of those deaths have been linked to the Life Care Center of Kirkland, Washington — considered ground zero of the U.S. outbreak on the West Coast. The facility said Saturday 90 out of 180 employees have symptoms of coronavirus.

States including Oregon, Washington, California, Maryland and New York have declared states of emergency. New York Governor Andrew Cuomo slammed the Centers for Disease Control for delays in responding to the outbreak and for not allowing private labs in New York state to test for the coronavirus. Over 100 cases have been identified in New York as of Sunday. Columbia University has canceled classes today and tomorrow after a “member of its community” was exposed to coronavirus. The University of Washington and other Washington-area schools have shifted to online classes. Stanford University in California has also, and Rice University in Texas has also canceled in-person classes.

The Conservative Political Action Conference, or CPAC, said one of its attendees has tested positive for the disease, causing Senator Ted Cruz and Arizona Congressmember Paul Gosar to self-quarantine after interacting with the individual at the conference last month. Three attendees at the AIPAC conference in Washington, D.C., last week have tested positive for coronavirus. Eighteen thousand people attended the conference, including a number of lawmakers. Vice President Mike Pence and Secretary of State Mike Pompeo were among the speakers.

Meanwhile, low-wage and hourly workers are calling attention to the fact that they are being forced to work even when they are sick, which is directly counter to CDC recommendations for containing coronavirus. On Friday, workers from fast-food chain Chipotle walked out of a New York City restaurant in protest of the company’s practices, which they say puts them, their co-workers and customers at further risk. Millions of workers do not receive paid sick leave.

In Washington state, activists from the Shutdown Northwest Detention Center Coalition are calling for health inspections at the immigrant jail and the release of a plan to help prevent the spread of coronavirus among prisoners and to treat any infected individuals.

While touring the CDC Friday, Trump responded to a reporter question about letting passengers from the Grand Princess cruise ship, which had been quarantined off the coast of San Francisco, disembark.

President Donald Trump: “I would rather — because I like the numbers being where they are. I don’t need to have the numbers double because of one ship. That wasn’t our fault.”

Twenty-one of the 3,600 people on board the cruise ship have been found to have coronavirus. But only 46 people have been tested. Passengers are set to start disembarking in Oakland today. Last week, Trump said at least a million tests would be available by the end of the week, but states around the country have been complaining of the lack of test kits, and the actual number of cases remains unknown due to insufficient testing.

In financial news, markets worldwide continued to tumble today. The collapse of an alliance between OPEC and Russia compounded the plunge, causing the worst one-day crash in crude prices in nearly 30 years.