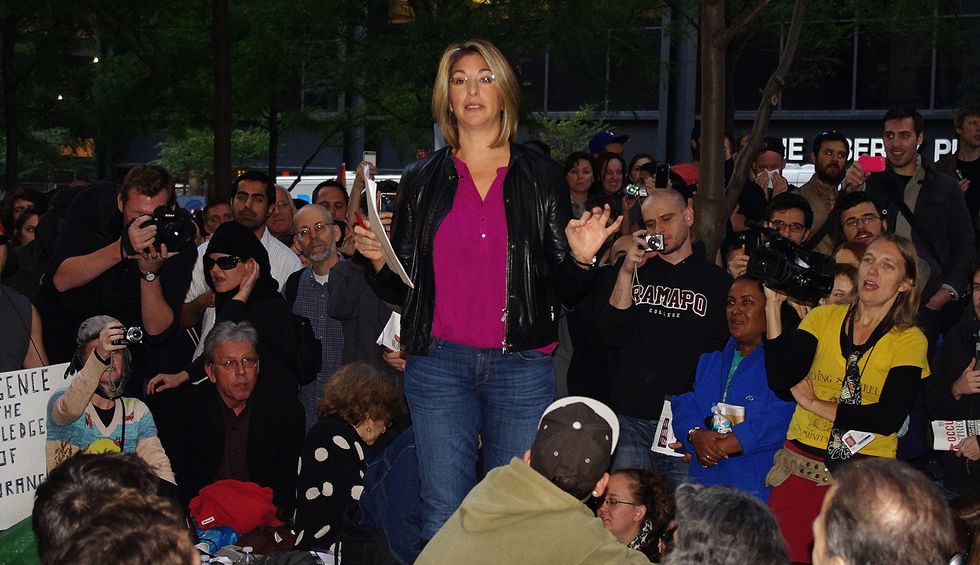 Author, activist and journalist Naomi Klein says the coronavirus crisis, like earlier ones, could be a catalyst to shower aid on the wealthiest interests in society, including those most responsible for our current vulnerabilities, while offering next to nothing to most workers and small businesses. In 2007, Klein wrote “The Shock Doctrine: The Rise of Disaster Capitalism.” Now she argues President Trump’s plan is a pandemic shock doctrine. In a new video for The Intercept, where she is a senior correspondent, Klein argues it’s vital for people to fight for the kind of transformative change that can not only curb the worst effects of the current crisis but also set society on a more just path.

AMY GOODMAN: Today we spend much of the hour looking at the economic impact of the coronavirus pandemic, what some are calling coronavirus capitalism. Soon we’ll be joined by Nobel Prize-winning economist Joseph Stiglitz, whose new book is People, Power and Profits: Progressive Capitalism for an Age of Discontent. But first we begin with a new video by author and activist Naomi Klein, produced by The Intercept. In 2007, Klein wrote The Shock Doctrine: The Rise of Disaster Capitalism. Now she argues Trump’s plan is a pandemic shock doctrine, but it’s not the only way forward. The video opens with this quote from economist Milton Friedman, who says, “Only a crisis — actual or perceived — produces real change. When that crisis occurs, the actions that are taken depend on the ideas that are lying around.”

NAOMI KLEIN: “Ideas that are lying around.” Friedman, one of history’s most extreme free market economists, was wrong about a whole lot, but he was right about that. In times of crisis, seemingly impossible ideas suddenly become possible. But whose ideas? Sensible, fair ones, designed to keep as many people as possible safe, secure and healthy? Or predatory ideas, designed to further enrich the already unimaginably wealthy while leaving the most vulnerable further exposed? The world economy is seizing up in the face of cascading shocks.

TEDROS ADHANOM GHEBREYESUS: COVID-19 can be characterized as a pandemic.

GEORGE STEPHANOPOULOS: In the wake of the coronavirus crisis, stocks have stopped trading on Wall Street after a 7% drop.

KRISTINA PARTSINEVELOS: This is a historical day, the biggest drop we’ve seen since that crash in 1987.

ELAINE QUIJANO: The drop was spurred by a growing oil price war as the market was already weakened by coronavirus fears.

PRESIDENT DONALD TRUMP: Yeah, no, I don’t take responsibility at all.

NAOMI KLEIN: In the midst of this widespread panic, corporate lobbyists of all stripes are of course dusting off all the ideas they had lying around. Trump is pushing a suspension of the payroll tax, which could bankrupt Social Security, providing the excuse to cut it or privatize it completely — an idea that has been lying around for very long time.

PRESIDENT GEORGE W. BUSH: A worker, at his or her option, ought to be allowed to put some of their own money in a — you know, in a private savings account.

NAOMI KLEIN: Lying around on both sides of the aisle.

SEN. JOE BIDEN: When I argued if we should freeze federal spending, I meant Social Security, as well. I meant Medicare and Medicaid.

NAOMI KLEIN: And then, there are the ideas being floated to bail out some of the wealthiest and most polluting sectors in our economy.

PRESIDENT DONALD TRUMP: We are working very closely with the cruise line industry, likewise with the airline industry. They’re two great industries, and we’ll be helping them through this patch.

NAOMI KLEIN: Bailouts for fracking companies, not to mention cruise ships, airlines and hotels, handouts which Trump could benefit from personally. Which is a big problem because the virus isn’t the only crisis we face. There’s also climate disruption, and these industries that are getting rescued with our money are the ones driving it. Trump has also been meeting with the private health insurers.

NAOMI KLEIN: The very ones who have made sure that so many Americans can’t afford the care they need. And what are the chances they don’t have their hands out? It seems like the whole pandemic is getting outsourced.

BRIAN CORNELL: Well, Mr. President, thank you for inviting us here today, along with our colleagues from Walmart and Walgreens and our partners at CVS. Normally you’d view us as competitors, but today we’re focused on a common competitor. And that’s defeating the spread of the coronavirus.

NAOMI KLEIN: The Fed’s first move was to pump $1.5 trillion into the financial markets, with more undoubtedly on the way. But if you’re a worker, especially a gig worker, there’s a very good chance you’re out of luck. If you do need to see a doctor for care, there’s a good chance no one’s going to help you pay if you aren’t covered. And if you want to heed the public health warnings to stay home from work, there’s also a chance that you won’t get paid. Of course, you still need to pay your rent and all of your debts — medical, student, credit card, mortgage. The results are predictable. Too many sick people have no choice but to go to work, which means more people contracting and spreading the virus. And without comprehensive bailouts for workers, we can expect more bankruptcies and more homelessness down the road.

Look, we know this script. In 2008, the last time we had a global financial meltdown, the same kinds of bad ideas for no-strings-attached corporate bailouts carried the day, and regular people around the world paid the price. And even that was entirely predictable. Thirteen years ago, I wrote a book called The Shock Doctrine: The Rise of Disaster Capitalism, described a brutal and recurring tactic by right-wing governments. After a shocking event — a war, coup, terrorist attack, market crash or natural disaster — they exploit the public’s disorientation, suspend democracy, push through radical free market policies that enrich the 1% at the expense of the poor and middle class.

But here is what my research has taught me. Shocks and crises don’t always go the shock doctrine path. In fact, it’s possible for crisis to catalyze a kind of evolutionary leap. Think of the 1930s, when the Great Depression led to the New Deal.

PRESIDENT FRANKLIN ROOSEVELT: The only thing we have to fear is fear itself.

NAOMI KLEIN: In the United States and elsewhere, governments began to weave a social safety net, so that the next time there was a crash, there would be programs like Social Security to catch people.

PRESIDENT FRANKLIN ROOSEVELT: The right of every family to a decent home, the right to adequate medical care and the opportunity to achieve and enjoy good health.

NAOMI KLEIN: Look, we know what Trump’s plan is: a pandemic shock doctrine, featuring all the most dangerous ideas lying around, from privatizing Social Security to locking down borders to caging even more migrants. Hell, he might even try canceling elections. But the end of this story hasn’t been written yet. It is an election year. And social movements and insurgent politicians are already mobilized. And like in the 1930s, we have a whole bunch of other ideas lying around.

SEN. BERNIE SANDERS: Do we believe that everybody should be entitled, as a right, to healthcare?

DOMINIQUE WALKER: We will not stop organizing and fighting until all unhoused folks who want shelter have shelter.

REP. RO KHANNA: It makes so much sense that if you’re sick, that you should not be penalized where you don’t have an income.

NAOMI KLEIN: Many of these ideas were dismissed as too radical just a week ago. Now they’re starting to seem like the only reasonable path to get out of this crisis and prevent future ones.

ELIZABETH COHEN: Now, here’s something that helps explain the difference between the testing situation in South Korea and the U.S. The South Korea, like European countries and Canada, has universal single-payer insurance. And that means that it’s easier to mobilize, and also people know what to do. There is pretty much one answer for how to get testing. The U.S. is a patchwork of countless different systems, and so you can’t say, “Here’s exactly the steps that every American should take in order to get tested.”

NAOMI KLEIN: And with Washington suddenly in the giant stimulus business, this is precisely the time for the stimulus that many of us have been talking about for years.

REP. ALEXANDRIA OCASIO-CORTEZ: Today is the day that we truly embark on a comprehensive agenda of economic, social and racial justice in the United States of America.

NAOMI KLEIN: It’s called the Green New Deal. Instead of rescuing the dirty industries of the last century, we should be boosting the clean ones that will lead us into safety in the coming century. If there is one thing history teaches us, it’s that moments of shock are profoundly volatile. We either lose a whole lot of ground, get fleeced by elites and pay the price for decades, or we win progressive victories that seemed impossible just a few weeks earlier. This is no time to lose our nerve. The future will be determined by whoever is willing to fight harder for the ideas they have lying around.

AMY GOODMAN: That’s author and activist Naomi Klein of The Intercept. The video ends with Milton Friedman’s quote: “Only a crisis — actual or perceived — produces real change. When that crisis occurs, the actions that are taken depend on ideas that are lying around. That, I believe, is our basic function: to develop alternatives to existing policies, to keep them alive and available until the politically impossible becomes politically inevitable.”