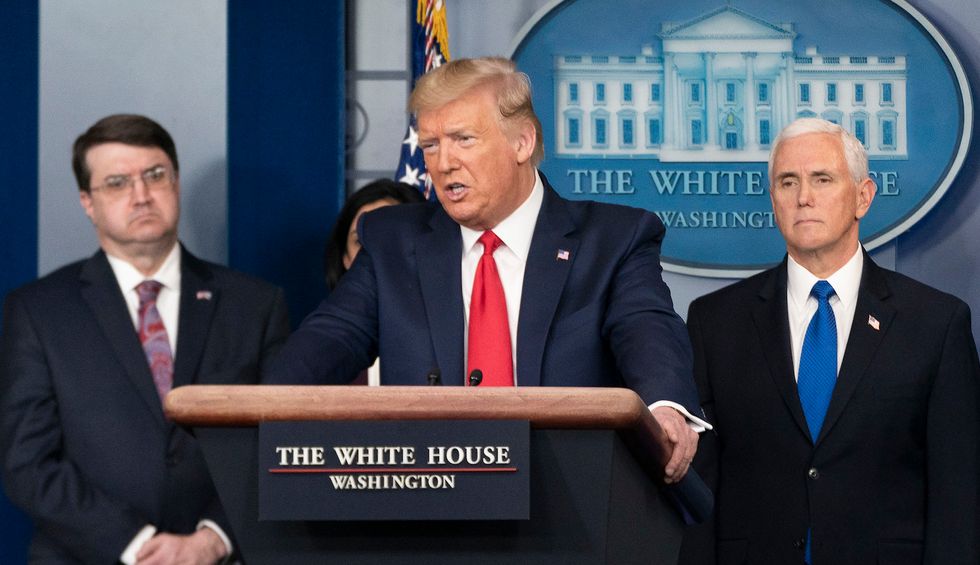 During remarks at the White House on Thursday about the ongoing coronavirus crisis, a keen photographer for the Washington Post captured a revealing glimpse of President Donald Trump's notes.

The photo showed that, despite the fact that whoever typed up the comments Trump was to read had written the phrase "Corona Virus," the word "Corona" had been crossed out and replaced by the word "Chinese."

Close up of President @realDonaldTrump notes is seen where he crossed out "Corona" and replaced it with "Chinese" V… https://t.co/bBt6eldX86
— Jabin Botsford (@Jabin Botsford) 1584641177.0

The note appeared to be in a sharpie and written in Trump's characteristic all-caps handwriting. And, unsurprisingly, Trump used exactly this wording when he began speaking:

Trump has already faced criticism for using the phrase "Chinese virus" to describe the outbreak of the Covid-19 pathogen. Critics have said it can play into a racist backlash against Asian-Americans, while defenders of the phrase say it properly placed blame for the crisis on the Chinese government, which genuinely failed in key ways that likely made the outbreak worse. (These people tend to ignore, though, that Trump himself had blundered in response and likely let the outbreak in the United States become much more severe than it could have been.)

I've argued that Trump and his allies seem to be picking this fight over the name precisely because they see any fight of this sort as redounding to their benefit. They hope to distract from the president's failures by launching into a debate about political correctness and by recasting the Chinese government as the enemy. Some Trump administration officials, however, have denounced the label as inappropriate.

But Fox News' Tucker Carlson praised Trump for using the term and clashing with critics in the media.

“Good for him,” Carlson said. “That was Trump at his very best.”

That's all Trump needed to hear. This kind of culture war battle is where he feels most comfortable, and he cares little about whether it makes the lives of Asian-Americans worse. So it's no surprise that he would rewrite the remarks of crucial national health briefings to reflect his bigotry.