Bernie Sanders supporters in Texas are 'pissed off.' But Texas Democrats need them in November 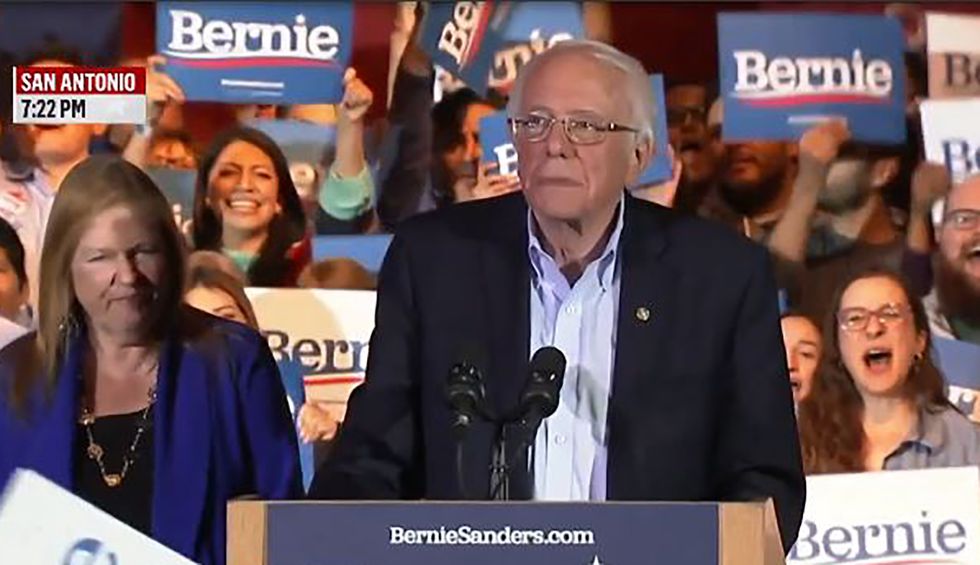 Image via Screengrab.
Alex Samuels
and
The Texas Tribune
March 05, 2020

"Bernie Sanders supporters in Texas are “pissed off.” But Texas Democrats need them in November." was first published by The Texas Tribune, a nonprofit, nonpartisan media organization that informs Texans — and engages with them — about public policy, politics, government and statewide issues.

The brewery broke out in a standing ovation and raucous applause at an election night watch party in East Austin Tuesday evening after early statewide vote returns showed Bernie Sanders with a solid lead over Joe Biden.

Amid the excitement, a Sanders campaign organizer encouraged attendees to fill their cups with beer and other libations and stock up on a menu that included pizza and burgers.

But that moment quickly faded.

It ended up being a tough night for Sanders’ loyalists and the candidate himself, who was unable to overcome an organized push by Biden and the party’s more centrist faction to slow the Vermont senator’s early-state momentum.

Though the early voting results offered promise to the self-proclaimed democratic socialist, the one-time front-runner for the nomination, election day returns dealt a fatal blow in the state. Biden received about 34% of the Texas vote, compared to Sanders’ 30%, according to the Texas Secretary of State.

“I’m pissed off,” Marlon Saucedo, a 25-year-old documentarian, said as final results showed a neck-and-neck race between the two white-haired septuagenarians. “There’s been a lot of push against Sanders and it makes me feel very helpless. There’s always going to be a faction of the party trying to stop him.”

Alan Zaizar, 30, who wore a “Unidos Con Bernie” pin, said he won’t vote for Biden if he ends up being the party’s nominee.

“I would write in Bernie’s name,” he said. “The DNC robbed the election from Bernie in 2016 and I’m tired of the status quo.”

Biden’s win was a striking comeback, since days earlier Sanders’s campaign seemed as if it was on a runaway train to the Democratic nomination. During a rally in Dallas on Monday, Beto O’Rourke endorsed Biden. Former rivals Pete Buttigieg and Amy Klobuchar did the same. Biden’s victory here was powered by the support of older, more moderate voters, key constituencies for Democrats and ones that polls show are overwhelmingly supportive of his candidacy.

But Texas Democrats this year have publicly acknowledged they need to expand their support if they want victories up and down the ballot. The party is trying to replicate Beto O’Rourke-esque level excitement in November, but the El Pasoan’s near-success against U.S. Sen. Ted Cruz in 2018 was driven, in part, by an organic effort from energized, young voters who turned out to the polls. Support and excitement among that same bloc is one of the biggest question marks surrounding Biden’s run; if young voters are not excited by him, it could make it difficult for Democrats to be successful this fall.

First: At a Bernie Sanders Super Tuesday watch party in Austin, Neal Whetstone watches as Joe Biden takes the lead in Texas. Last: A supporter records on a cellphone as Sanders' speech is broadcast on television.

At the statewide level, Democrats are nine seats away from nabbing the majority. And the party is targeting seven U.S. House seats in November.

To be sure, it’s still a volatile race for the nomination; Sanders could come out victorious, and no candidate so far has been able to amass an insurmountable delegate lead. Some political analysts have both acknowledged the generational gap in Biden’s support and downplayed its importance, arguing that the party will eventually come together to oust President Donald Trump.

“There’s always going to be a vocal loud subset of supporters who are PO’ed their person didn’t make it,” said Harold Cook, a Democratic political analyst. “The advantage we have this time that we didn’t have four years ago is that now we have a deep, deep understanding of how bad this current president is.”

At the election night event, more than a dozen attendees, ages 25 to 65, gave varying answers for why they were supporting Sanders for the Democratic Party’s nomination. The promise of “Medicare for All,” the Green New Deal, free college tuition and marijuana legalization motivated many, while some pointed to the diverse coalition he has built nationwide. In Texas, for instance, Sanders performed strongly in many areas dominated by the Hispanic vote, such as El Paso County and other counties along the border.

For Biden, though, Sanders’ loyalists carried mixed feelings. Many respected his tenure as Barack Obama’s vice president, but emphasized that his resume wasn’t enough; some said that his time had passed, and that he hasn’t embraced many progressive proposals.

“At the risk of sounding too left-wing, I’d say that Biden is too right for me,” said Harold Waters, 31. “He got added to the Obama ticket to strengthen it on the right and he said he’s open to having a Republican vice president.”

Austin Price, 31, said, “Biden supported the crime bill of the 90s and was anti-gay marriage for ages. I’m not afraid he’s too moderate, I’m honestly afraid he’s too Republican.”

“He’s talking about working across the aisle, but I feel like he’s going to dissolve the aisle completely,” said Price, a freelance writer from Austin.

While Price and Waters came into Austin brewery on Tuesday jubilant about a possible Sanders victory, their optimism dissolved throughout the night: Across Texas’ 10 most populous counties, Sanders easily won the early vote with 201,772 ballots to 152,717 for Biden. But the former vice president surged to victory on election day, earning 337,960 votes to 247,731 for Sanders. The unified show of support from Buttigieg, Klobuchar and O’Rourke behind Biden in the days before the election likely contributed to that result.

According to CNN’s exit polling data, Gen Z and Millennial voters in Texas overwhelmingly supported Sanders over Biden. While Sanders won over voters between 18 and 44, Biden held a formidable lead among older Texans.

The difference in opinion across generations speaks to the changing politics of the nation over the last several decades, said Sam Martin, an assistant professor at Southern Methodist University.

“I don’t think younger voters feel any particular nostalgia for the Obama-era that Biden wants to go back to,” Martin said. “They don’t feel nostalgia for a message that promises a return to something that wasn’t necessarily terrific.”

Martin pointed out that overestimating the strength of young people elides other key voting blocs, like suburban women and voters of color, who are typically more civically engaged and politically active. She warned, however, that should Biden become the nominee, he’ll still need to appeal to the same supporters Sanders has amassed.

“Democrats need to be very careful with their messaging in this election,” she said. “If Joe Biden becomes the nominee, he needs to be very careful not to dismiss the Democratic hopes, and the dreams of the people that Bernie Sanders’s supporters are fighting for.”

“If they do that, that is what will make them not vote for Biden,” Martin added. “And what [Sanders’ supporters] are fighting for is a system that is just and fair. The dismissive nature is exactly what has gotten the Democratic Party to this point.”

One attendee at the Sanders watch party, Maritza Arroyo, said Sanders speaks to a larger coalition of Texas voters — “the Hispanics, minority voters and the working class,” Arroyo recited around 11 p.m. Tuesday night — while she saw Biden as a continuation of the status quo.

For a lot of Sanders’ fans, last night was all too reminiscent of 2016, when many of his supporters felt he was “cheated” of the nomination by the Democratic National Committee in favor of Hillary Clinton, who ended up losing the general election to Trump. Many voters said they were already skeptical of the nominating process, and that last night didn’t assuage their concerns.

And while many Biden supporters touted their candidate’s electability, Sanders backers rejected the notion that Biden was better poised to face Trump. For many, their trust in Sanders was solidified years before he launched his first presidential bid, citing his years-long record on criminal justice reform and economic issues like raising the minimum wage.

“Younger voters have grown up in a post-Reagan world where everything was already going to shit,” said Blake Wilson, an Austin-area Uber driver. “I was in middle school when George Bush was elected, and it felt like the empire descending on my country.

“I knew it was everything I wanted to reject,” Wilson, 33, said. “So our whole lives we’ve been running in the opposite direction,” and toward Sanders.

Price, the Austin-area writer, said “there’s not enough room for a general election for moderates.”

“If Biden wins the primary, we’re again going to see a refutation of this moderate system on a large scale,” he said. Adding, “a nominee needs to mobilize the people who feel like they don’t matter and don’t care.”

Despite many of Sanders’s supporters being visibly shaken by the election night’s results, many retained a sliver of hope that Texas wouldn’t be a harbinger for Sanders’ weakness down the line.

Asked whether they were giving up after tonight, Stephen Krause, who said he canvassed for nine hours on Super Tuesday, said he had already predicted a loss for Sanders in the state, but said it was “fucking wild” to realize that “Bernie can do this all in Texas.”

This article originally appeared in The Texas Tribune at https://www.texastribune.org/2020/03/04/bernie-sanders-supporters-texas-joe-biden-democrat-2020.