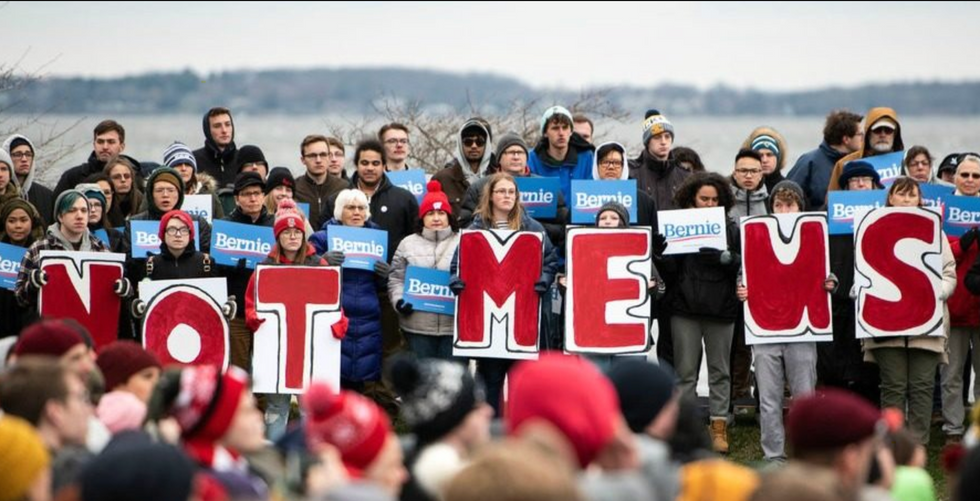 Bernie Sanders’ moment has come. He now trails Joe Biden by 21 points in Real Clear Politics’ polling average and would need to win around 58 percent of the remaining delegates to secure the nomination.

But with the coronavirus driving a political dynamic that locks Joe Biden into a winning trajectory – and yesterday’s primaries confirming the all-but-certain conclusion of the nomination process – Sanders’ now has maximal leverage to gain big wins for his movement, the Democratic Party and the country. Equally important, the current national emergency and the long-term, rolling crisis in our politics that led to the election of Donald Trump demand the formation of a grand coalition of the sane. The time has come for the different factions within the Democratic coalition to strike a deal.

The elements of a bargain are surely there. Biden needs Sanders. The biggest known strategic threat to Democrats’ chances of defeating Donald Trump is failing to keep Sanders’ enthusiastic primary voters in the Democratic column in the general election. An energetic effort from Sanders to rally his supporters would go a long way toward avoiding that outcome (if Democrats had merely shaved the rate of 2016 Sanders’ primary supporters defecting to Trump from 12 percent to 9 percent they would have won Pennsylvania, Michigan, Wisconsin…and the election).

But Sanders also needs Biden. (He also likes Biden personally, which was not the case with Hillary Clinton.) Sanders has been effective during the nominating process in setting the terms of the debate and driving the other candidates’ policy agendas to the left. If he wants to continue to move the Democratic party and its policy landscape in the direction he has advocated for decades, the most effective way to do it is by extracting concessions from Biden now. This is the only train leaving the station.

Staying in the race – as many aides and supporters are apparently hoping Sanders will do – would serve no purpose other than to “influence the party platform at the convention,” which is like throwing away a candy bar so you can have the wrapper: the platform has absolutely zero to do with the future President’s actual agenda. And studies of drawn-out, contentious primaries suggest that they hurt a party's chances in the general election.

Dealing now versus later is the difference between negotiating a prenuptial agreement and a divorce. The former is struck in a constructive spirit – we hope that we will stick together (but just in case, let’s write stuff down) – while the latter is a truce in an often bitter fight, one that rarely plants the seeds for a productive future collaboration.

This means that Sanders can choose between having a complaint or an impact, but probably not both. The contrast between those two avenues was on full display in the March 15 debate. Moderator Ilia Calderon pointed out that Biden had just “endorsed an Elizabeth Warren plan” on bankruptcy and also “announced support for making public college tuition free for families who make less than $125,000 a year,” which mimicked a Sanders plan.

In other words, a deal was on the table. And while Sanders was preparing for two hours of castigating Biden for long-ago Senate floor speeches, Elizabeth Warren was silently maneuvering behind the scenes to rack up wins on the things she cares about (this is how Senator Warren operates – she’s a masterful inside player who gets stuff done). Biden’s pre-debate move on tuition was the real clue. He was handing Bernie Sanders a not-too-subtle invitation: “Elizabeth and I are working together now, and I’ll play ball with you too, if you’ll let me.”

In order to work, a Sanders-Biden agreement must deliver meaningful wins for Sanders’ movement while keeping Biden’s core messaging intact, and it has to build a lasting, ongoing partnership with a real role for Sanders and his allies. That’s do-able. Here’s what it might look like.

Biden could start with adopting a more aggressive push on global warming by moving toward the Sanders plan for the electricity and transportation sectors to be carbon-free by 2030, including significant increases in investment to bridge the funding gap between his $1.7 trillion plan and Sanders’ $16.3 trillion. This should include adopting Sanders’ call for spending an additional $1.52 trillion on renewable energy and $852 billion to build energy storage capacity, $526 billion on needed upgrades to the grid itself, and $2.18 trillion for weatherizing and retrofitting homes and businesses. Such no-regrets investments would do quadruple duty in fighting carbon emissions, providing ongoing economic stimulus, supporting (mostly unionized) workers, and aligning with Biden’s message around his successful track record of governing competence in overseeing similar investments through the 2009 Recovery Act.

Biden could also jump on board with the Sanders/Warren wealth tax plan. This would be politically shrewd and totally consistent with his moderate image – a wealth tax is supported by almost 2/3 of all Americans including a majority of Republicans, and it is wildly popular with Sanders’ base of support.

On health care, the exhausting Medicare-for-All debate won’t shift, but Biden should jump all over Sanders’ proposal to eliminate medical debt, which may have been the savviest policy idea of the entire nominating process. It also fits like a glove with the current coronavirus discussion.

Finally, Biden should give Sanders meaningful input on cabinet and agency appointments. He has already smartly confirmed that his Vice Presidential selection will be a woman, so why not start the process of assembling a full shadow / presumptive cabinet, adapting Thom Friedman’s “Team of Rivals” idea to include some prominent progressive leaders like Alexandria Ocasio-Cortez and Elizabeth Warren? He can give Bernie Sanders a real role, both on the team vetting the choices and in his transition should he be elected. He can also give Sanders particular input over the selection of Wall Street regulators, as Warren has done previously.

The point is that it is not a stretch to design an agreement that gives the movement that Sanders leads its most concrete achievements in decades – and by coalescing the party and improving Biden’s chances of victory, the greatest chance of making them real.

Of course, it is an understandable impulse to keep prodding Democrats from the outside rather than joining forces. As Michael Kazin, editor of the left-wing magazine Dissent, has said, “The radical left’s major influence in American history is to push liberals, progressives, to the left.” That is still the first instinct.

Sanders needs to lead people past that. Striking a good bargain is not capitulation, but capitalization: a giant dividend to the working people and young voters he champions, delivering on decades of political investment.

One top Sanders strategist noted that the most important thing to Sanders in the weeks ahead will be “representing the movement” and “not letting down the people who have been with him all along.” Having all of their hard work, dedication, and hope dissipate into once again dwelling in long-term gadfly opposition would be the true betrayal. To give them the change they have fought for, to make it about them, not him, Sanders needs to lead a unification now.