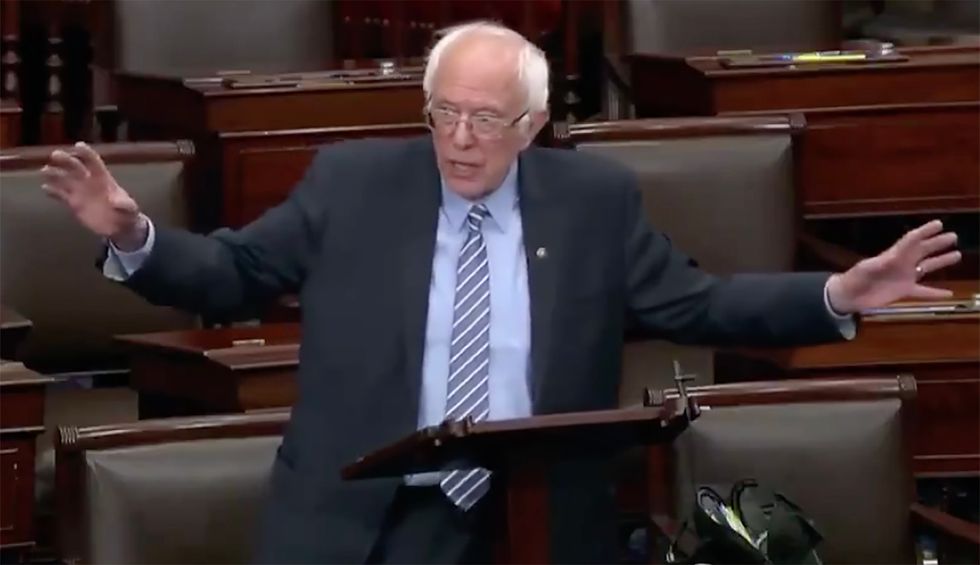 In a fiery speech on the Senate floor Wednesday ahead of the chamber's passage of a massive coronavirus stimulus bill, Sen. Bernie Sanders ripped his Republican colleagues for doing everything in their power to ensure that poor and vulnerable people receive less financial assistance than they desperately need in this moment of nationwide crisis.

"Now I find that some of my Republican colleagues are very distressed. They're very upset that somebody who's making 10, 12 bucks an hour might end up with a paycheck for four months, more than they received last week," Sanders said, referring to the group of Republican senators who threatened to delay passage of the stimulus bill over its temporary expansion of unemployment benefits, which they described as overly generous.

"Some of my Republican friends still have not given up on the need to punish the poor and working people."

In response, as Common Dreams reported, Sanders vowed to hold up the stimulus legislation with a demand for stronger conditions on the bill's "corporate welfare fund" if the Republican senators refused to drop their objections to the unemployment provisions.

The Senate ultimately defeated an amendment by Sen. Ben Sasse (R-Neb.) that would have limited unemployment benefits and the stimulus bill passed Wednesday night by a vote of 96-0.

"Oh my god, the universe is collapsing. Imagine that?" said Sanders, waving his arms in mock distress. "Somebody who's making 12 bucks an hour now, like the rest of us, faces an unprecedented economic crisis with the $600 bucks on top of their normal, their regular unemployment check, might be making a few bucks more for four months. Oh my word! Will the universe survive?"

There is no politician in America who fights harder for the working class than Bernie Sanders. So proud to work f… https://t.co/h4l3cUXeVi
— Joe Calvello (@Joe Calvello) 1585187437.0

"How absurd and wrong is that? What kind of value system is that?" asked Sanders, a 2020 Democratic presidential candidate. "Meanwhile, these very same folks had no problem a couple years ago voting for a trillion dollars in tax breaks for billionaires and large profitable corporations. Not a problem."

"But when it comes to low-income workers, in the midst of a terrible crisis, maybe some of them earning or having more money than they previously made—oh my word, we gotta strip that out," Sanders continued. "You see because poor people are down here, they don't deserve, they don't eat, they don't pay rent, they don't go to the doctor, they're somehow inferior because they're poor, gonna give them less. Some of my Republican friends still have not given up on the need to punish the poor and working people."