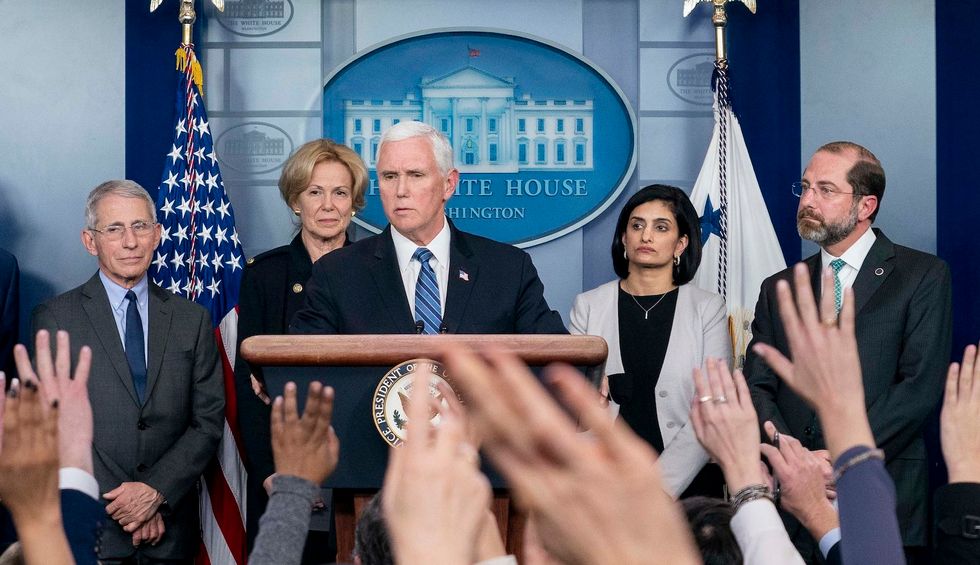 The Trump administration on Tuesday barred the media from filming or recording audio of a daily coronavirus briefing at the White House, sparking outrage from members of the press and progressive critics.

Journalists were only permitted to take still photos of the briefing, HuffPost reported Tuesday, leading some to characterize the press conference as a mere photo-op rather than an effort to convey critical information about the disease as it spreads across the United States.

The briefing was led by Vice President Mike Pence, who was appointed by President Donald Trump to head the White House's coronavirus response.

Al-Monitor reporter Laura Rozen called the decision to ban video and audio "absolutely outrageous" and said the move "will further signal [to] the public that the Trump administration doesn't have a handle on this."

Jim Acosta, CNN's chief White House correspondent, tweeted that "the closest thing to an explanation we got as to why the coronavirus briefing was off-camera with no audio was when Pence said Trump was on camera a bunch today."

WH is allowing only still photos of this Coronavirus briefing. No audio or video permitted. Here is a photo of the… https://t.co/ehvatskON2
— Jim Acosta (@Jim Acosta) 1583276391.0

"We need transparency. Instead we are getting this," Judd Legum, author of the Popular Information newsletter, tweeted late Tuesday.

The photo-only press briefing came as the Trump administration is reportedly working to clamp down on White House coronavirus messaging. Federal scientists and health officials, according to the New York Times, are now required to coordinate with Pence on all public appearances and statements related to the outbreak.

Michael Halpern, deputy director of the Center for Science and Democracy at the Union of Concerned Scientists, wrote in a blog post last week that Trump's effort to "muzzle" federal scientists "is a highly dangerous power grab that undermines both emergency response and public faith in the reliability of information coming out of the government."

"If this censorship and retaliation trend continues, we can expect more gross incompetence in handling the virus' spread," Halpern warned. "More people will get needlessly sick and more people will needlessly die."