A pandemic is laying bare the GOP's blatant corruption and recklessness 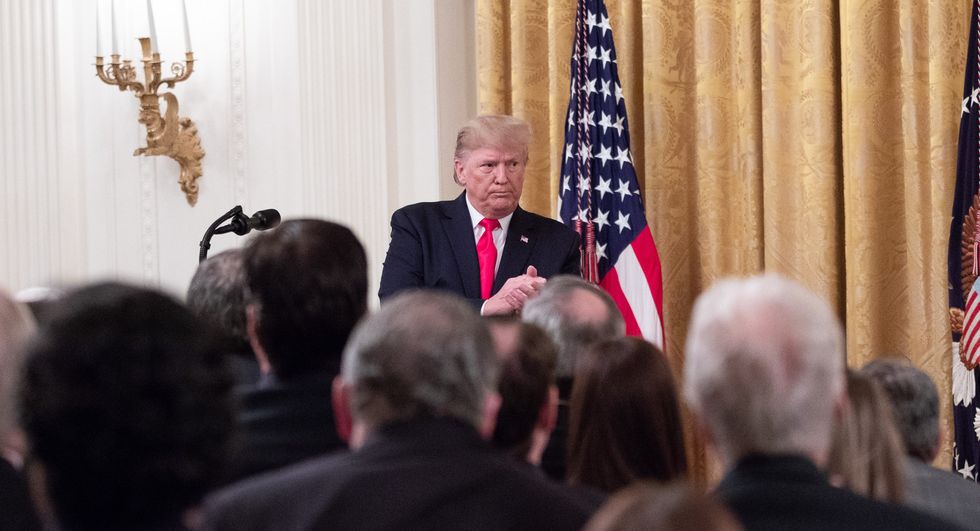 As we watch states around the country start to shut down, one by one, as if the lights were all going out across the country, there is plenty of discussion about President Trump's bungled response and his compulsion to deliver happy talk and disinformation to the American people. Now that he is unable to hold his beloved rallies and has taken over the daily coronavirus briefing, the opportunities for the latter are unfortunately multiplying. His performances before the cameras every day are getting more and more surreal.

On Thursday, Trump came before the country touting a supposed wonder drug that he promised looked like a major breakthrough. (In fact, it's a standard antimalarial medication.) As usual, the experts had to walk that back later, saying that it's just one of many drugs being considered as a possible treatment but they won't know for months. Reports coming from within the administration confirm that the bungling continues unabated. Between Jared' Kushner's "shadow task force" and turf wars among the various players, it seems nobody really knows who's running the show. It certainly isn't Trump, who is clearly spending most of his time watching Fox News and the stock market ticker.

There was a time when we might have expected Republicans in Congress to wake up from their stupor and exert some leadership in the face of a president's overwhelming incompetence in such a crisis. Sure, maybe they felt it was no big deal that he engaged in a criminal cover-up from the moment he took his oath, or that he extorted a foreign leader to smear his political opponent.

Maybe it doesn't mean anything to them that he's pretty much dismantled the executive branch as a functional part of government and completely destroyed America's reputation abroad. Assaulting the press, nepotism, rampant corruption and intentionally dividing the country into warring camps obviously aren't things that keep them up at night.

But you would have thought GOP lawmakers might be just a little bit concerned about their own voters getting sick and dying in droves. Not to mention the collapse of the world economy.

Unfortunately, leading Republicans don't seem all that worked up about it, or at least not in public. Recall that Senate Majority Leader Mitch McConnell adjourned the Senate for three days last week. He didn't feel it was necessary to stay in session so they could put together an emergency economic package to help the millions of workers and owners who have lost their jobs and businesses overnight.

He had priorities and they didn't include trying to mitigate the effects of what appears to be an impending economic meltdown:

This is why Mitch McConnell sent the Senate home for the weekend. To join Brett Kavanaugh at an oath ceremony for o… https://t.co/SS92pOkGFF
— Sherrod Brown (@Sherrod Brown) 1584558760.0

McConnell finally reconvened the Senate this week and Republicans came up with their own plan on Thursday evening — over which, unfortunately, the GOP caucus is still squabbling. Politico's Jake Sherman reports that Sen. Lindsey Graham, R-S.C.. and new White House chief of staff Mark Meadows are lobbying Trump to reject the idea of immediate cash payments. Apparently they don't think it's important to get money into the hands of the millions of people whose incomes have abruptly dried up, and prefer an increase in unemployment benefits. (Why this should be either/or is beyond me. Clearly, we need both.)

They aren't the only Republican senators who don't like the bill McConnell came up with, with some favoring loans to small businesses and others arguing against bailouts. As they continue to bicker amongst themselves. many are displaying their ignorance, shallowness and irresponsibility during this emergency.

Here's Alaska's long-serving solo congressman, Rep. Don Young, sounding like one of those drunken kids on spring break in Fort Lauderdale, characterizing the response to the epidemic as "hysteria" and exhorting a group of senior citizens not to follow the instructions of public health experts:

This beer virus I call it — they call it a coronavirus, I call it a beer virus — how do you like that? It attacks our senior citizens. Now, I'm one of you. I still say we have to as a nation, as a state, to go forth with our everyday activities.

Sen. Ron Johnson of Wisconsin expressed his skepticism as well:

I'm not denying what a nasty disease COVID-19 can be, and how it's obviously devastating to somewhere between 1 and 3.4 percent of the population. But that means 97 to 99 percent will get through this and develop immunities and will be able to move beyond this. But we don't shut down our economy because tens of thousands of people die on the highways. It's a risk we accept so we can move about. We don't shut down our economies because tens of thousands of people die from the common flu.

Johnson is a multimillionaire businessman, but he seems to be a bit confused about numbers. Traffic accidents account for about 34,000 deaths per year in the U.S. If the coronavirus kills 1 to 3.4 percent of the population, that would add up to somewhere between 3 and 11 million people. I suspect that could be pretty bad for business, but what do I know?

Sen. Rand Paul, R-Ky., wasted everyone's time with an irrelevant amendment and gave a speech in which he referred to immigrants as "non-people." Sen. Chuck Grassley, R-Iowa, said he couldn't understand why Chinese people would be upset that Trump is calling this disease the "Chinese virus" because "Spain never got upset when we referred to the Spanish flu in 1918 and 1919." (They did get upset. That pandemic originated in Kansas, but Spain was the only country not under wartime censorship so that's where it was first reported. That's not a good precedent.)

The Republicans have lost the ability to legislate, even in an emergency. All they know how to do is confirm unqualified judges and protect Donald Trump from accountability.

Well, actually — they also know how to look out for No. 1. NPR reported on Thursday that Sen. Richard Burr, R-N.C., had given a private briefing to some influential big donors on Feb. 27. As chairman of the Intelligence Committee as well as co-author of the Pandemic and All-Hazards Preparedness Act, Burr was in a good position to know what was coming down. He warned this select audience that the coronavirus was akin to the 1918 flu pandemic and that we might have to close schools, curtail travel and call out the military.

Here's what the president was telling the American people at that time:

ProPublica reported later on Thursday that Burr had sold millions of dollars worth of stock days before he gave his big-donor buddies this helpful heads-up. As it happens, Sen. Kelly Loeffler, R-Ga., whose husband just happens to be the chairman and CEO of the New York Stock Exchange, also dumped millions of dollars worth of stock immediately after a full Senate briefing on the virus by the subcommittee on health.

How likely is it that they are the only ones?

Everyone thinks the Republican establishment is afraid of Donald Trump. This entire episode suggests that's not true. It isn't that they're afraid of him. They're just like him.