'You're stonewalling about stonewalling!' Democratic senator tears into Treasury Secretary Mnuchin over his protection of Trump 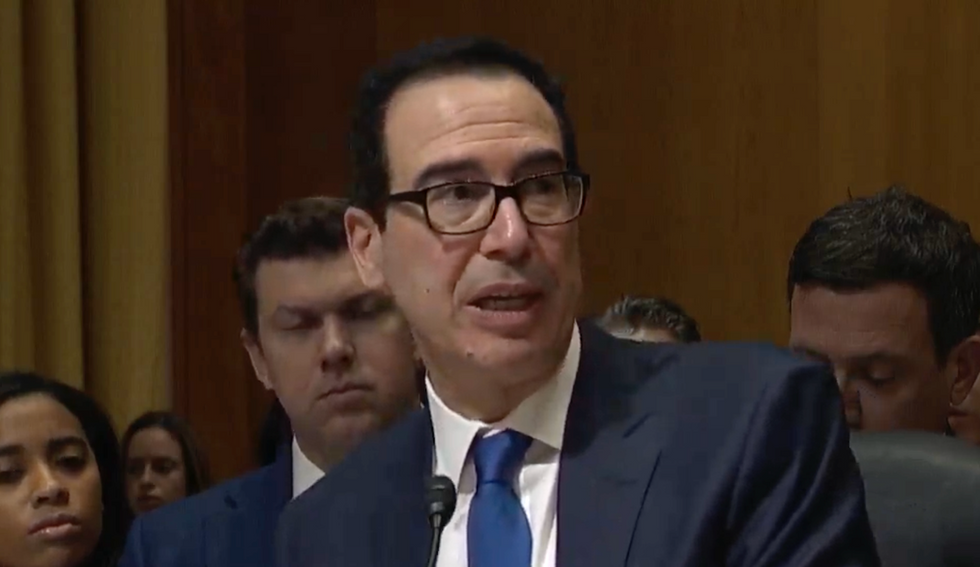 Democratic Sen. Ron Wyden of Oregon grilled Treasury Secretary Steven Mnuchin on Wednesday in a public hearing about how his department has treated requests differently when they've come from Democratic and Republican lawmakers.

"One request is backed up by clear, statutory language in tax code section 6103 requiring the 'shall provide' tax documents to the committee," Wyden said, referring to the congressional Democrats' efforts to obtain President Donald Trump's tax returns. "The other request doesn't have the same legal basis, and certainly, to me, it looks political," he continued, referring to Republicans' efforts to obtain financial information related to former Vice President Joe Biden's son, Hunter Biden.

"The request from the Democratic chair, with a firm legal basis, was met with nothing but legal foot-dragging.  The request that came from the Republican chairs got VIP treatment.  They got, you know, a response out the door in a flash. So it looks to me like there's a double standard here. And that you all are tipping the scales of congressional oversight. What am I missing Mr. Secretary?" Wyden asked.

Mnuchin tried to defend his department's actions, saying he had "significant concerns" about the request for Trump's taxes (even though, as Wyden correctly said, the law clearly gives Congress the right to obtain anyone's returns.) Mnuchin said that, meanwhile, the department has responded to thousands of requests ostensibly similar to those regarding Hunter Biden. He offered no explanation, though, about why the president warrants special protection — especially regarding information that all other previous presidents in modern times have willingly made public — while the apparent targeting of the former vice president's son raises no "significant concerns."

"That's really not fair at all," Mnuchin shot back.

Wyden continued to press Mnuchin on another potential case of corruption regarding Halkbank, a state-owned bank in Turkey. Wyden said it has been "accused of a billion-dollar scheme to help Iran evade our sanctions." But Mnuchin, the senator said, has met seven times with Turkish officials who may be implicated in the scheme.

"Doesn't this send a horrible picture to pose in the Oval Office with sanctions violators?" Wyden asked.

Mnuchin said this number of meetings is not remarkable, but he can't comment on the Halkbank case.