Why Thomas Jefferson was really no friend of religious freedom 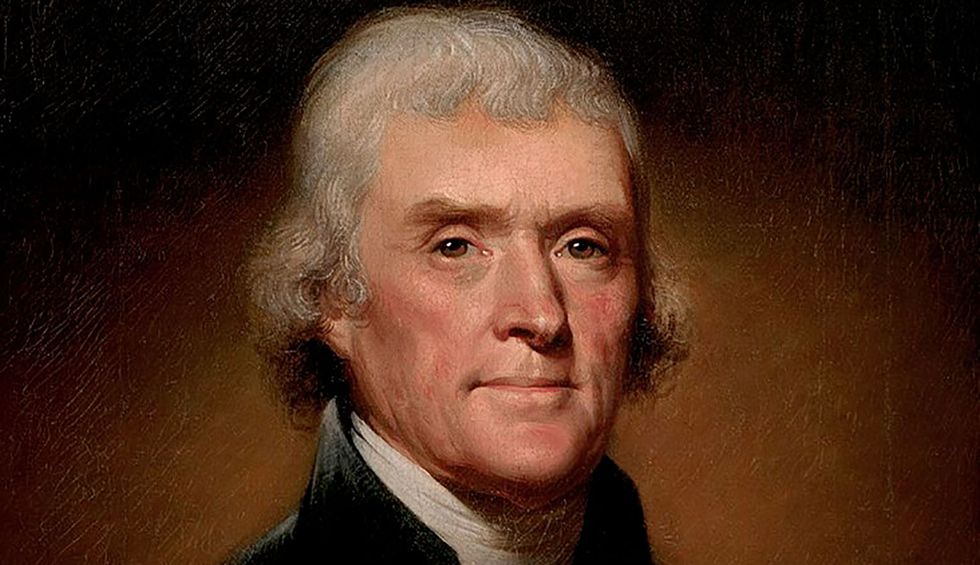 Advocacy of religious freedom means one believes sectarian religiosity is a good thing and it is beneficial to society to have the freedom to choose one’s own religion.

Advocacy of religious tolerance means one believes sectarian religiosity is bad or neutral and it is necessary for liberal society to tolerate discordant religious beliefs.

In Query XVII of Notes on the State of Virginia, Jefferson writes succinctly but unfavorably of metaphysical religious squabbling. “The way to silence religious disputes, is to take no notice of them.” If all religions are allowed expression and none is given political succor, their disputes will produce at best parochial turbulences that will be swamped out catholically.

For Jefferson, religion, correctly apprehended, is equivalent to morality. Religion is only legitimate when it acts in the service of morality and justice—that is to say subtly, when it works quietly. However, formal religious systems—political in nature and inveigling people through mysteries of miracles(such as a dead man coming back to life and water mysteriously and immediately being converted to wine)and other matters at odds with common sense, such as one god being three—are anything but quiet, and thus, for Jefferson, are mostly metaphysical twaddle for the sake of establishing empleomaniacal priestly intermediaries between humans and God.

People, essentially social beings for Jefferson, are adequately equipped with a moral sense to guide them in social situations, as a benevolent deity would not make humans social beings and also create them to be morally deficient. In short, humans have an innate and natural sensual understanding of their moral duties, which are, thinks Jefferson, both other-directed and god-directed.

Duties to man they fulfill through recognizing correct moral action in circumstances in their daily interactions with others. There is no need of moral instruction, as a sense of morally correct action is innate—hence, Jefferson’s disadvises nephew Peter Carr (10 Aug. 1787) concerning attending lectures on morality, as our moral conduct is not “a matter of science”—but there is need of goading and honing morality to incite persons to act when circumstances call for action.

Duties to God they fulfill through study and care of the cosmos in which they were placed. That largely explains Jefferson’s appreciation for, and love of, science. The truths disclosed by science allow humans to get a glimpse of the mind of God. That is why Jefferson, in his tour of the French villagers, speaks disparagingly of the mass of French peasants, who, having no farm houses, huddle in villages, and “keep the Creator in good humor with his own works” by mumbling “a mass every day.” Consider also what Jefferson writes about Maria Cosway, living at the time in a convent, to Angelica Church (27 Nov. 1793). “I knew that to much goodness of heart she joined enthusiasm and religion; but I thought that very enthusiasm would have prevented her from shutting up her adoration of the God of the universe within the walls of a cloister.”

True, natural religion is natural morality. There is no need of priests, as intermediaries between people and God, as natural religion is generic, exoteric, and simple. Jefferson writes to James Fishback (27 Sept. 1809) of sectarian religions: “every religion consists of moral precepts, & of dogmas. in the first they all agree. all forbid us to murder, steal, plunder, bear false witness Etc. and these are the articles necessary for the preservation of order, justice, & happiness in society.” Yet most of the doctrines of a sectarian religion are esoteric; they are not crafted for the sake of honest or benevolent living. Clerics use indecipherable metaphysical claims to political advantage. They also engage in fatuous disputes. Jefferson continues:

in their particular dogmas all differ; no two professing the same. these respect vestments, ceremonies, physical opinions, & metaphysical speculations, totally unconnected with morality, & unimportant to the legitimate objects of society. yet these are the questions on which have hung the bitter schisms of Nazarenes, Socinians, Arians, Athanasians in former times, & now of Trinitarians, Unitarians, Catholics, Lutherans, Calvinists, Methodists, Baptists, Quakers Etc. among the Mahometans we are told that thousands fell victims to the dispute whether the first or second toe of Mahomet was longest; & what blood, how many human lives have the words ‘this do in remembrance of me’ cost the Christian world!

Sectarian religions do not follow, but deviate from, nature.

Outside of certain core beliefs that all genuinely religious persons share, there are considerable differences in personal religious convictions. Yet none of those differences has any bearing on a citizen’s capacity to govern, or to be governed. To ingeminate a sentiment from Notes on Virginia: “It does me no injury for my neighbor to say there are twenty gods, or no god. It neither picks my pocket nor breaks my leg.” Religious conviction is a personal matter. “The care of every man’s soul belongs to himself,” writes Thomas Jefferson in his Notes on Religion, written in 1776. “Laws provide against injury from others; but not from ourselves.” Four decades later (6 Aug. 1816), Jefferson writes similarly to Mrs. Harrison Smith: “I have ever thought religion a concern purely between our God and our consciences, for which we are accountable to Him, and not to the priests. God himself will not save men against their wills.”

Since it is a personal matter, religion cannot be politicized. When clergy, driven by empleomania, engraft themselves into the “machine of government,” he tells Jeremiah Moor (14 Aug. 1800), they become a “very formidable engine against the civil and religious rights of man.” That shows Jefferson’s distrust of the politically ambitious religious clerics of his day and of prior days.

For Jefferson, government functions best when it is silent, and it is most silent when its laws are few. Those governing must be like machines insofar as they grasp and actuate the will of the majority. Jefferson says to Dr. Benjamin Rush (13 June 1805) about his role as president, “I am but a machine erected by the constitution for the performance of certain acts according to laws of action laid down for me, one of which is that I must anatomise the living man as the Surgeon does his dead subject, view him also as a machine & employ him for what he is fit for, unblinded by the mist of friendship.” When government is stentorian and its intrusions are many, its loudness and intrusions are sure signs that the rights of its citizens—choice of religion, being one—are being suffocated.

Jefferson says to Miles King (26 Sept. 1814) that deity has so authorized matters that each tree must be judged by its fruit. The suggestion here is not that each action is to be judged moral or immoral when it has a fruitful or fruitless outcome. Jefferson, like Aristotle, is referring to actions over the course of a lifetime.  He adds that religion is “substantially good which produces an honest life,” and for that, each is accountable solely to deity. “There is not a Quaker or a Baptist, a Presbyterian or an Episcopalian, a Catholic or a Protestant in heaven; …on entering that gate, we leave those badges of schism behind.” The suggestion, if not implication, is that religious clerics are otiose. Allen Jayne states, “Jefferson eliminated all intermediate authorities between God and man as the source of religious truth, such as exclusive revelation or scripture, church or tradition, and most of all, the clergy.”

In sum, careful analysis of Jefferson’s advocacy of freedom of religion shows little consideration of large respect for sectarian religions, but instead worry that lack of freedom of religious expression and, especially, partnership of any one religion with government will be prohibitive of republican government, which has as its primary function protection of the liberties and rights of the citizenry. In sum, republican government demands freedom of religion and for Jefferson, whose views on sectarian religions are far from reverential, that amounts to advocacy of religious toleration, not religious freedom. If all religions are allowed free expression and none is given political sanction, then the empleomania of religious clerics will be reduced to provincial metaphysical squabbles which will be drowned out at the levels of state and federal government.

M. Andrew Holowchak, Ph.D., is a philosopher and historian, editor of "The Journal of Thomas Jefferson's Life and Times," and author/editor of 16 books and over 100 published essays on Thomas Jefferson. He can be reached through www.mholowchak.com.