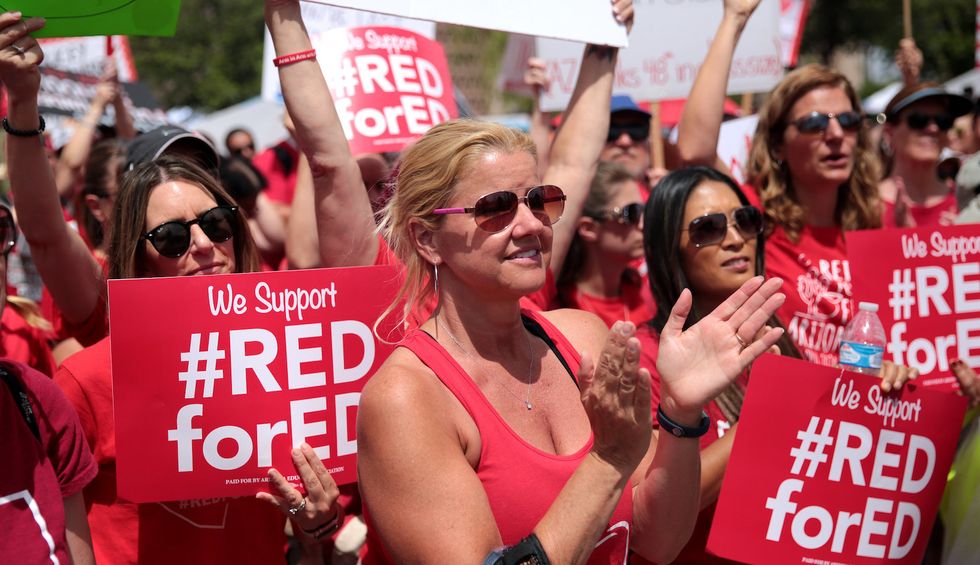 In the early morning of February 26, a chill hung in the air as a line of teachers and school support staffers clad in bright red union hats, jackets or some combination thereof stood on a busy street corner outside of Highland Park Middle School in St. Paul, Minnesota.

As cars sped past, some with horns blaring in support, the teachers and school workers—who are members of the St. Paul Federation of Educators (SPFE)—hoisted signs proclaiming their willingness to fight on behalf of students.

SPFE represents more than 3,500 teachers, education assistants and school and community support staff members. Minnesota state law requires districts to negotiate with their unionized employees every two years, and the current round of contract talks between SPFE and the St. Paul Public Schools, under the leadership of Superintendent Joe Gothard, has been going on since last May.

Now, SPFE President Nick Faber says the union and the students and families they serve can no longer wait for Gothard and his team to step up and negotiate in good faith. On February 20, a majority of SPFE members voted to authorize a strike against the St. Paul Public Schools.

If an agreement between the union and the school district is not reached by March 10, thousands of SPFE members will walk off the job for the first time since 1946.

The key contract items SPFE is pushing for include fully staffed mental health teams in all schools, a greater investment in special education staffing and programming, and an increase in the number of multilingual staff members.

This puts the union squarely in line with other social justice-oriented labor movements that have been revived in recent years, as seen in events such as the teacher strikes in Chicago and Los Angeles in 2019. Like SPFE, the Chicago and Los Angeles unions also advocated for more than the typical bread-and-butter issues of union contracts, such as salary increases and seniority rights, and additionally pushed for better living and learning conditions for students.

All of this is taking place against the backdrop of the recent wave of Red for Ed teacher strikes and wildcat actions that have roiled school districts and state capitals from California to Oklahoma, West Virginia, Puerto Rico, and beyond.

These teacher-led movements for greater pay, smaller class sizes, and more respect and stability for public education overall have been credited with inspiring worker strikes in other fields too, including auto workers and Amazon employees. Along the way, organized labor’s profile has risen, making it a sought-after voting bloc in today’s political landscape.

This is likely a main reason why Democratic presidential candidates Bernie Sanders, Elizabeth Warren, and Amy Klobuchar sent out tweets in support of SPFE’s potential strike, although all three also have established track records of support for union workers.

SPFE’s emphasis on the needs of students has also earned the union crucial support from community members.

Kirinda Anderson is the parent of a seventh-grader at St. Paul’s Highland Middle School, and she joined the teachers as they rallied in front of the school on February 26. As she stood shoulder-to-shoulder with those holding picket signs and chanting slogans, Anderson said she came out to implore the St. Paul schools to act with urgency on behalf of all students.

“I attended a budget meeting held by the district in January,” Anderson recalled. “There, the district said they have a three-to-five-year plan to address the need for more mental health support in schools, but our students can’t wait that long.”

They need help as soon as possible, she noted, citing the high levels of trauma many students have to contend with both inside and outside of school.

“If the district is serious about educating all of St. Paul’s children,” Anderson said, “they should settle the contract with SPFE now.”

As chants of “Get up, get down/St. Paul is a union town” and “Sí se puede” rang out around her, Highland Park Middle School music teacher Beth Swanberg struggled to hold back tears when explaining why she was rallying on the street corner before the school day started.

“I have heard that one out of four students, overall, has an undiagnosed mental health issue, and they need so much more support,” she said. They are simply dealing with what’s going on around them, Swanberg stated, from the effects of institutionalized racism to the trauma of gun violence.

It adds up to everyday stress, she said, and that stress is impacting students’ ability to learn and stay focused on school.

Swanberg also drew attention to some of the more global factors that make it hard for teachers and support staff to reach every student they work with. For one thing, she pointed out, special education mandates are woefully underfunded at the federal level, leaving states and school districts to make up the difference by increasing caseloads for teachers, for example, or by pulling money out of general education funds.

Another factor looming in the background, Swanberg believes, is a decades-long disinvestment in public services across the United States. “There has been a starving of public entities—from health care to public schools and public housing,” she argued, to the detriment of the students and families who are most in need of such services.

As if on cue, a new report shows that a large number of Minnesota’s public schools are facing serious budget deficits even though lawmakers authorized a $540 million funding increase in 2019. School districts in the Twin Cities metro area alone are staring down $93 million in funding gaps, according to a local news outlet.

In an interview with Minnesota Public Radio, Scott Croonquist of the Association of Metropolitan School Districts put the blame for this gap on the “rising cost of educating students with a growing number of special needs.” It’s a problem Croonquist says won’t be fixed until the state reckons with the chronic underfunding of the special education services districts are legally required to provide.

Teacher salaries in the state—which fall near the middle of average teacher salaries nationally—are also rising just slightly faster than the annual 2 percent bump in education funding authorized by the Minnesota legislature.

On top of this, public education in the state, as well as across the country, has been largely underfunded since at least the early 2000s—right as the standardized test-based accountability movement arose, demanding that “no child be left behind.”

These factors have helped put the squeeze on school districts like St. Paul’s, where two-thirds of students live in poverty, according to federal guidelines, and hundreds lack a permanent home. The city’s schools are also some of the most racially and linguistically diverse in the United States.

The question for many St. Paul teachers and school staffers is what to do about this. Should the narrative of failing public schools be allowed to continue to flourish, with little public discussion of the threat posed by privatization, underfunding, and rising poverty rates for students and families?

Or should SPFE insist on striking in order to fight for the schools and the support systems they believe all kids need and deserve?

“Educators have pushed the district to settle the contract since we started bargaining in May,” Faber said in a statement. If that settlement doesn’t come by March 10, expect to see a wave of union red filling St. Paul’s streets in response.

Sarah Lahm is a Minneapolis-based writer and researcher. Her work has appeared in outlets such as the Progressive and In These Times. Follow her on Twitter @sarahrlahm.