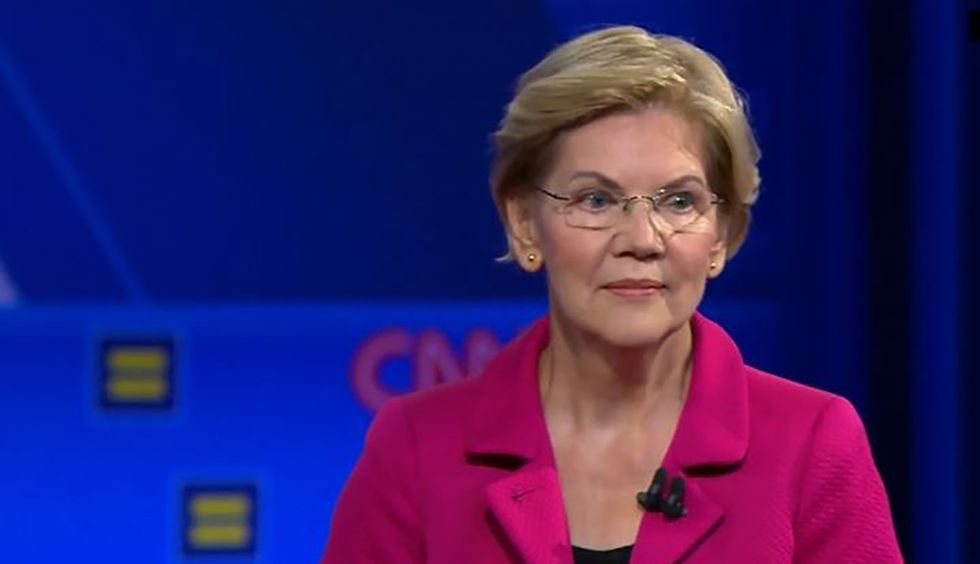 On Wednesday night, Democrats held their ninth debate on the way to picking a nominee to take on Donald Trump this fall. Based on social media reactions, it was crystal clear Elizabeth Warren won the night—and it started in the first two minutes when she went straight at Mike Bloomberg with a punch he never saw coming: “I’d like to talk about who we’re running against: a billionaire who calls women fat broads and horse-faced lesbians, and no, I’m not talking about Donald Trump.”

You can watch that clip again below, but with that remark, Warren was out of the gate and she never relented.

Time after time, Warren took Bloomberg to task for his harmful, racist policies as New York City’s mayor, his defense of racist bank lending practices, and his use of nondisclosure agreements to protect himself and others at his company who have discriminated, sexually harassed, or worse. Warren struck so many blows against Bloomberg that toward the end of the debate, someone edited Bloomberg’s Wikipedia page to note the date of his death and the cause of death: Senator Elizabeth Warren.

Even as people are still talking about the strength of Warren’s debate performance, particularly against Bloomberg, she’s not sitting back. In fact, she went on another offensive in Las Vegas, this time taking direct aim at billionaire casino owner Sheldon Adelson, who has been one of the biggest Republican Party donors in history. Adelson is reportedly donating $100 million to Donald Trump and Republicans this year alone. Along with the Robert and Rebekah Mercer and Charles Koch, Adelson and his billionaire counterparts essentially own the Republican Party at every level. They finance Republicans from your local city council all the way to the White House, and they do it because it benefits them financially. Republican policies, which are often written and directed by the aforementioned, directly benefit these billionaires. Look no further than the tax cut Republicans voted on in the middle of the night. The 2017 tax bill gave billions in tax cuts to the uber-wealthy, forcing cuts to services meant for those who need assistance the most. Although Republicans always feign surprise that the tax cuts didn’t pay for themselves, make no mistake about it: For them, the resulting cuts in services are a benefit, not a glitch. As Republican activist Grover Norquist once said of the federal government, “I just want to shrink it down to the size where we can drown it in the bathtub."

So how did Warren go after Adelson this morning? By taking out a full-page ad in the The Las Vegas Review-Journal, the largest newspaper in Las Vegas, which Sheldon Adelson purchased in 2016. In the ad, Elizabeth Warren made the case for her wealth tax, noting Adelson would have to pay $2.3 billion in taxes in the first year alone. Warren’s ad further notes how this money would be reinvested to help everyday Americans by canceling student loan debt, investing in childcare to help working parents, and much more. Nevada reporter Jon Ralston, who was a panelist in Wednesday night’s debate, noted Warren’s “chutzpah” for taking aim at Adelson in his own hometown and in the pages of his own newspaper.

If Warren keeps this up and somehow gets the nomination, she’s going to need a bigger mug.

As promised, here’s that opening shot across the bow.