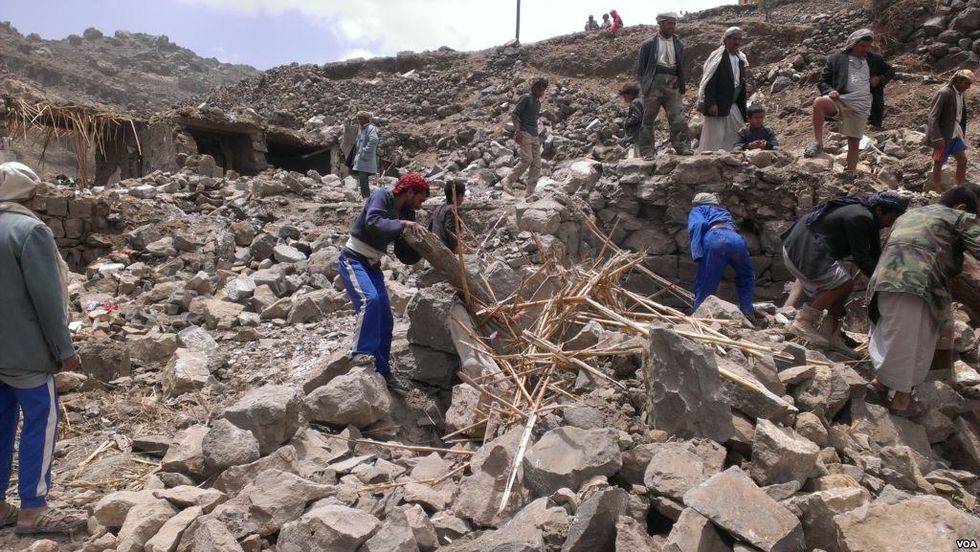 The United Nations and humanitarian aid groups condemned the U.S.-backed Saudi-led coalition for carrying out airstrikes Saturday that killed 31 civilians and wounded dozens more, including women and children, in Yemen's Al-Jawf province.

"We share our deep condolences with the families of those killed and we pray for the speedy recovery of everyone who has been injured in these terrible strikes," Lise Grande, U.N. humanitarian coordinator for Yemen, said in a statement. "So many people are being killed in Yemen—it's a tragedy and it's unjustified. Under international humanitarian law parties which resort to force are obligated to protect civilians."

"Five years into this conflict and belligerents are still failing to uphold this responsibility," added Grande. "It's shocking."

Xavier Joubert, director of aid group Save the Children Yemen, demanded an investigation into the airstrikes and said nations providing the weaponry for such attacks must share the blame. The United States is the largest supplier of weapons to the Saudi regime, whose years-long assault on Yemen has helped create the world's worst humanitarian crisis.

"The war shows no signs of slowing down. Yemen is a hellish place for children," said Joubert. "The reports of today indicate that once more explosive weapons make no distinction between fighters and civilians. This latest attack must be urgently and independently investigated, and perpetrators held to account."

"We call on all parties to the conflict to adhere to international laws and standards, and to protect children on the ground," Joubert continued. "Those who continue to sell arms to the warring parties must realize that by supplying weapons for this war, they contribute to making atrocities like today's all too common."

The Saudi airstrikes came after Houthi rebels claimed to have shot down a Saudi Tornado jet Friday in Al-Jawf province.

At least 31 people have been killed in deadly airstrikes in Yemen. The Saudi-UAE-led coalition acknowledged the "… https://t.co/K5Cn5kv01x
— Al Jazeera English (@Al Jazeera English) 1581864196.0

Eighty percent of Yemen's population—over 24 million people—are in dire need of humanitarian aid and 14 million are on the brink of famine, according to the United Nations.

In a 2018 report, Save the Children estimated that 85,000 Yemeni children under the age of five have died from malnutrition since 2015 as the Saudi-led coalition has bombed the country—often hitting schools and hospitals—and restricted the flow of food and medicine.

Last April, as Common Dreams reported, U.S. President Donald Trump vetoed a measure that would have ended American military support for the Saudi-led assault on Yemen.

Rep. Ro Khanna (D-Calif.), who helped lead the push for the Yemen War Powers Resolution in the House of Representatives last year, warned at the time that Trump's veto would risk "the lives of millions of Yemeni civilians to famine, deadly airstrikes, and the war crimes of the Saudi regime."