Trump's State of the Union featured reality-show stunts and empty rhetoric. But he can't erase impeachment 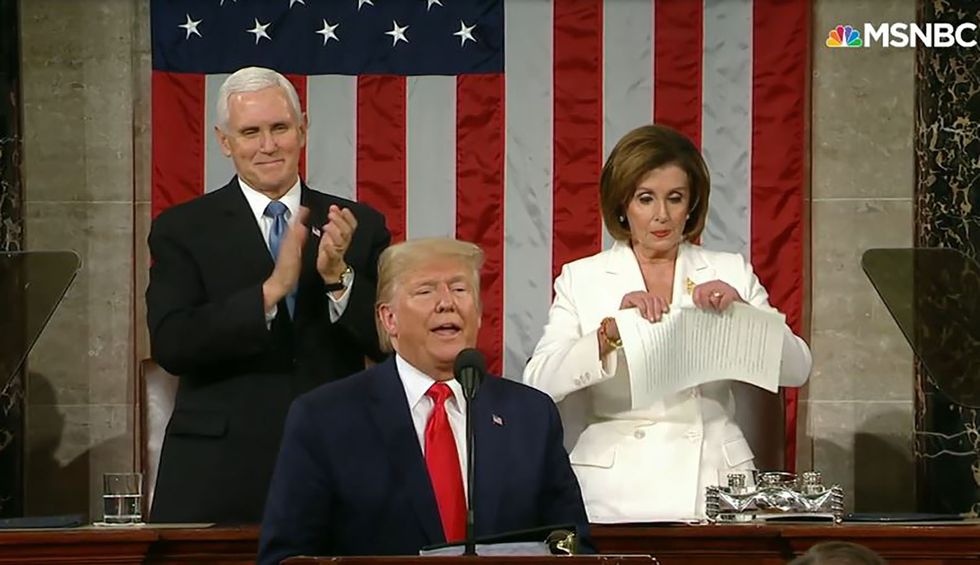 For whatever reason, Senate Majority Leader Mitch McConnell has still failed to wrap up his sham impeachment trial of Donald Trump, denying his orange overlord the much-anticipated acquittal that Trump clearly wished to trumpet. And so it was that Trump took to the House chamber on Tuesday night, one day short of his kangaroo exoneration, to give the annual State of the Union or, as I like to call it, the Sniffing Olympics.

Though the soon-to-be-forgotten Iowa caucus snafu dominated the news cycle for a full day leading up to Trump's speech, some Democrats managed to capture media attention away from the breathless incompetence and point it toward the, dare I say, more pressing moral concern of the criminal in the White House and the corrupt Republican Party that is protecting him.

On Tuesday, Rep. Alexandria Ocasio-Cortez, D-N.Y., tweeted that she "will not use my presence at a state ceremony to normalize Trump's lawless conduct & subversion of the Constitution," and therefore "will not be attending the State of the Union."

She was joined in this decision by Rep. Ayanna Pressley, D-Mass., and at least six more Democratic members of Congress, all objecting to the fact that Republicans are about to acquit Trump, even though he's guiltier than John Wilkes Booth. It was an act of protest that doubles as an act of self-care. Anyone who skips listening to this racist blowhard snuffling his way through a Stephen Miller-penned paean to himself is likely to extend their lifespan many times the length of the speech.

And, boy howdy, was the choice to sit this one out to catch up with "The Crown" a smart one. Trump's speech, as usual, somehow managed to be pretentious while written at a fifth-grade level, to prevent those legendary literacy stumbles. Sadly, it wasn't quite successful. A few sentences in, Trump was defeated by his nemesis, the Teleprompter, saying, "Confidence is searching" before correcting himself and saying "surging," even though there was actually an unintentional bit of poetry to his Freudian slip.

Speaker of the House Nancy Pelosi built on her epic in-your-face clap at Trump from last year, offering to shake his hand and mugging gloriously for the camera when he failed to understand the gesture. Playing at being Jim from "The Office" may be a small gesture towards the Resistance, but it was a welcome one. That bit of upstaging will likely be remembered far longer than any of the empty words droned out by Trump over the adoring applause from Republicans.

And then she ripped up the speech, because Pelosi is not going to pretend any of this is normal.

Still, Trump managed to pull a headline-grabbing stunt, in his usual way: By cheap trolling, and by defiling the office he rode into on a wave of bigotry. In this case, by giving Rush Limbaugh the Presidential Medal of Freedom, after declaring the odious talk-radio host "the greatest fighter and winner."

Limbaugh recently announced a diagnosis of Stage 4 lung cancer, which can do nothing to erase the fact that he has been nothing but a cancer on this nation's discourse for decades.

This is the man who joked, "Have you ever noticed how all composite pictures of wanted criminals resemble Jesse Jackson?" and called a 13-year-old Chelsea Clinton "the White House dog." He said the NBA should be renamed "the TBA, the Thug Basketball Association" and accused Michael J. Fox of faking his Parkinson's disease. Famously, he said the only reason a woman might need insurance coverage for contraception would be because she's "a slut" and "a prostitute."

That Trump would proclaim such a man as a hero makes sense, of course. Limbaugh was instrumental in turning nearly 45% of this country into the nihilistic, racist bullies necessary to vote Trump into office. And nothing triggers the libs more than besmirching a great honor by hanging it on such a repugnant man as Limbaugh.

As usual, Trump's speech was full of blatant lies, particularly his claim that it's Democrats who are out to take away health care and Republicans who intend to protect programs that Americans depend on.

This is, of course, an obnoxious lie. At the World Economic Forum in Davos, Switzerland, a couple of weeks ago, Trump let loose that cutting "entitlements" — which, as Helaine Olen at the Washington Post notes is "Washington-speak for Medicare and Social Security" — would be on his plate "toward the end of the year."

In other words, he'll be protecting Medicare and Social Security not "always," but until he's re-elected, at which point, he told reporters in Davos, "we're going to look" at cuts. This is on top of the scheme he's already cooked up to cut people off Medicaid coverage with block grants to states designed specifically so the money will run out.

Most of the rest of the speech was the usual fascist demagoguery that has grown no less evil, even as we've all grown sadly used to it. Trump expounded at length on his long-discredited theory that undocumented immigrants are the main if not sole source of crime in the country. (For the 153rd time, Immigrants commit crimes at lower rates than native-born Americans.) He dug with pornographic glee into the details of a handful of violent crimes committed by immigrants, in the long tradition of racists with ethnic-cleansing agendas throughout history.

Trump also demagogued, in especially empty rhetoric, about the supposed evils of socialism, an ideology embraced by no actual members of Congress or candidates for president. (Sen. Bernie Sanders and some of his fellow travelers are democratic socialists, but that's really closer to '70s-style liberalism, or Franklin D. Roosevelt's New Deal, than to actual socialism.)

No doubt Trump's speechwriter, Miller, thought that was hot stuff. But upon even a moment's reflection, it's obvious that while all the individual words have definitions, together, they create a black hole of meaning.

It's clear that Trump hopes to distract the media and the voters from his impeachment, which he never mentioned, with reality-TV stunts. In addition to Limbaugh's medal, Trump surprised an Army wife by bringing her husband back from deployment in Afghanistan. These kinds of antics are sure to get gushing coverage from the folks on Fox News.

But they won't change the facts: Trump is guilty of running an extortion scheme on the Ukrainian leadership, trying to force that nation to help him cheat in the 2020 election. When Republicans vote to acquit him on Wednesday, it will not be an exoneration but a cover-up and a historic, grotesque miscarriage of justice. Most Americans know this, and will almost certainly be motivated to vote against Trump in November. Trump can't win in a fair fight, and no number of hack speeches will change that.