Trump’s plan to have GOP Senate allies investigate his enemies facing roadblock of his own design: report 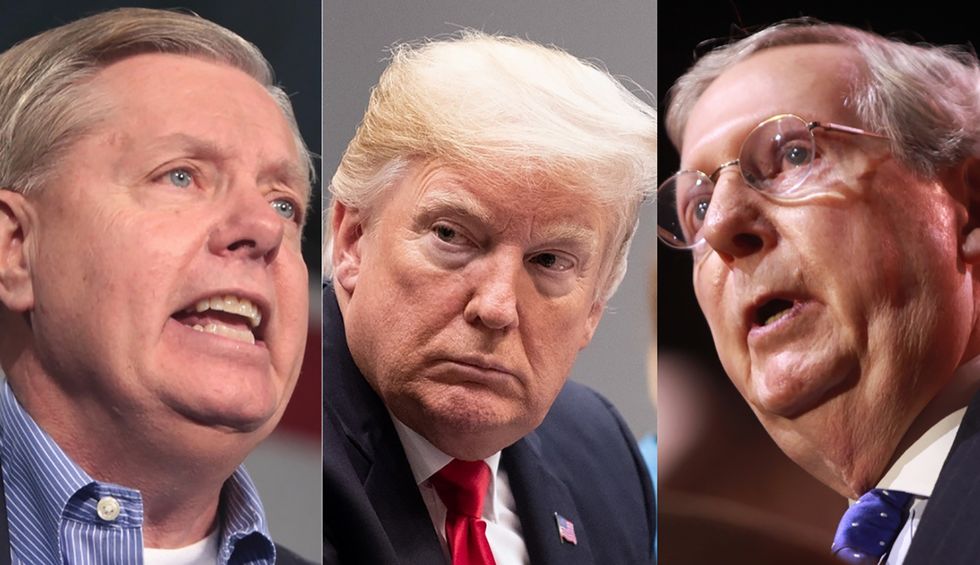 According to a report from the Daily Beast, Donald Trump’s hopes of using Republican allies like Sen. Lindsey Graham (R-SC) to investigate his enemies may run into a major roadblock because of policies put in place by his own Justice Department and legal briefs by his personal attorneys.

With reports that multiple GOP-majority Senate committees are planning to investigate former Vice President Joe Biden and his son Hunter, the Beast notes that Trump’s attorney’s use of the courts to stop investigations of their client may also derail going after his critics and perceived enemies.

As the Beast’s David Lurie writes, after noting “We all know, since the Democrats took control of the House, President Donald Trump has tried to frustrate all congressional investigations of his misconduct, culminating with his demand that government agencies and witnesses refuse to comply with every subpoena the House issued in its impeachment investigation,” he adds, “If Trump prevails on challenges to Congress’ oversight powers now before the Supreme Court, he may also limit the ability of his congressional allies to embark on the witch hunts Trump wants them to pursue against his political adversaries. Why? Because, in order to protect the president, Trump’s own lawyers and Bill Barr’s Justice Department are asking the Court to effectively bar Congress from investigating allegedly corrupt public officials. “

“Trump’s Justice Department, along with his personal lawyer, Jay Sekulow, are now seeking to convince the Supreme Court that legislators should be largely barred from investigating lawbreaking, including by government officials,” the report states before pointing to Trump’s “stonewalling” of investigations into his administration– with the blessing of Attorney General Bill Barr.

“William Barr’s DOJ has fully endorsed Trump’s stonewalling, and has filed briefs supporting the positions taken by Sekulow. In its Supreme Court brief regarding the House subpoenas, the DOJ argues that Congress’s oversight authority to investigate corruption and illegality is actually tightly constrained, calling into question the permissibility of the kinds of oversight investigations Congress has regularly undertaken for decades,” the report notes. “According to the DOJ, congressional investigations into illegal conduct by individuals, including the president, are extremely problematic, because they can lack a ‘valid legislative purpose’ and may instead be directed at, heaven forbid, ‘exposing illegality for its own sake.’ The Congress, DOJ asserts, lacks the power to expose illegal conduct ‘for the sake of exposure,’ and therefore should be prevented from focusing its investigations upon ‘private’ misconduct, including where such ‘private’ conduct is criminal and corrupt.”

“If the Supreme Court accepts Trump’s argument, the investigation into the Biden conspiracy theory that Graham and his senate colleagues have committed to pursuing at Trump’s behest would be strictly constrained, if not ended. According to Sekulow and the DOJ, it is precisely such efforts to inquire into ‘personal’ corruption that are outside Congress’s oversight power. Indeed, should Trump’s argument be accepted, large swaths of Congress’ normal course of investigative oversight activities touching upon potentially illegal conduct will be rendered invalid,” Lurie summarizes.