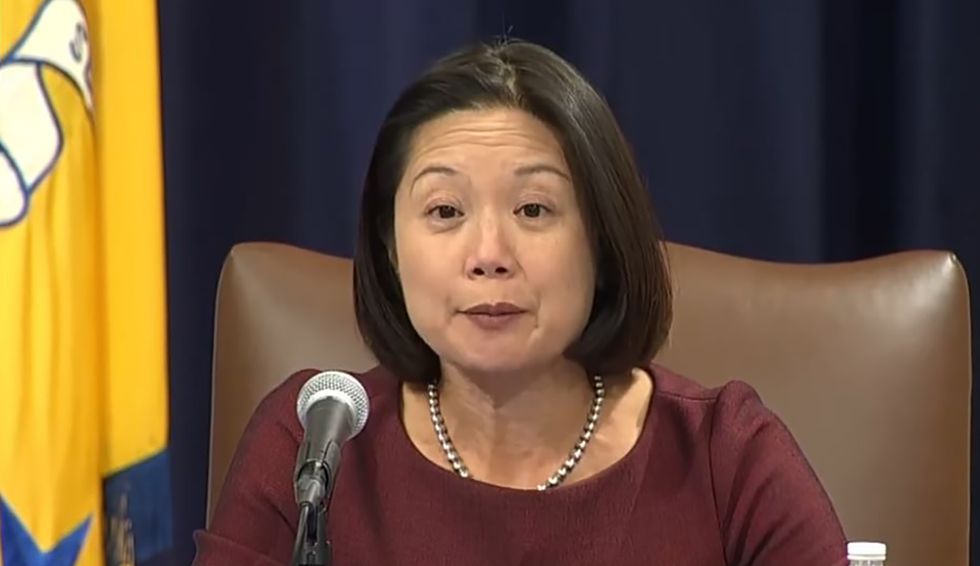 Trump withdrew the nomination of Jessie Liu, the former U.S. attorney for D.C., to serve as the Treasury Department's undersecretary for terrorism and financial crimes Tuesday, only two days before she was set to appear at her Senate confirmation hearing, Axios first reported.

Liu headed the largest U.S. attorney's office the country, which oversaw the prosecutions of Trump associate Roger Stone, former national security adviser Michael Flynn and former Trump campaign chief Paul Manafort, all of whom were either convicted or pleaded guilty to federal crimes. (Flynn has since withdrawn his guilty plea.)

Liu stepped down from her position in January after Trump nominated her for the Treasury post. She was expected to remain at the Justice Department until she was confirmed, but Attorney General William Barr "unexpectedly" informed her last month that she would be replaced by his close adviser, Timothy Shea, according to Axios.

An NBC News report detailing Barr's recent moves to "take control of legal matters of personal interest to President Donald Trump" noted that Liu also oversaw the investigation into former acting FBI Director Andrew McCabe, who was fired after drawing Trump's ire. The president demanded that McCabe be prosecuted, but the Justice Department's case against the former deputy of James Comey has stalled.

Along with replacing Liu, Barr was praised Tuesday by Trump for intervening to reduce to sentencing recommendation for Stone, a move which prompted all four prosecutors overseeing the case to withdraw. One of the prosecutors resigned from the Justice Department entirely. Barr also intervened in Flynn's case, pressuring prosecutors to reduce his recommended six-month jail sentence to probation, according to NBC News.

The moves come as Trump, who was acquitted by Republicans in a Senate impeachment trial last week, purged many of the administration officials involved in his impeachment inquiry.

Army Lt. Col. Alexander Vindman, a National Security Council official who testified against Trump, and his twin brother were removed from their positions at the White House and escorted out of the building Friday, months before their assignments were scheduled to expire. Ambassador to the European Union Gordon Sondland, who admitted to a "quid pro quo" on Ukraine to Congress, was fired that same day despite pleas from Republican lawmakers.

And the purge may not yet be over. The White House is expected to revoke the nomination of Elaine McCusker to be the Pentagon's comptroller and chief financial officer after she resisted the administration's directive to freeze military aid appropriated by the Congress to Ukraine, according to The New York Post.

Emails obtained by Just Security last month showed that McCusker, who serves in the comptroller and CFO position on an acting basis, pushed back on a directive from the White House budget office to freeze the aid, warning that such a move could violate the law.

Budget official Michael Duffey told McCusker in September that it was the Pentagon's responsibility to disperse the funds, even though it was ordered not to by the White House.

"If you are unable to obligate the funds, it will have been DoD's decision that cause any impoundment of funds," Duffey wrote.

"You can't be serious," McCusker replied. "I am speechless."

"This administration needs people who are committed to implementing the president's agenda," a White House official told the New York Post, "specifically on foreign policy, and not trying to thwart it."

But McCusker's warning was correct. The Government Accountability Office found that the White House violated the law that bars presidents from withholding funds allocated by Congress.

"Faithful execution of the law does not permit the President to substitute his own policy priorities for those that Congress has enacted into law. OMB withheld funds for a policy reason, which is not permitted under the Impoundment Control Act (ICA)," the GAO said in its decision. "The withholding was not a programmatic delay. Therefore, we conclude that OMB violated the ICA."