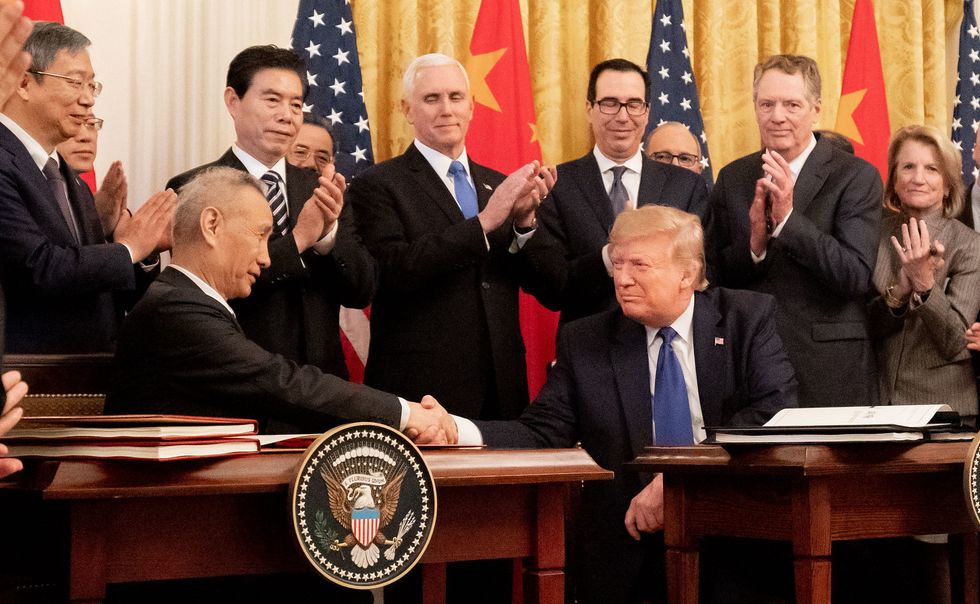 President Donald J. Trump participates in a signing ceremony of an agreement between the United States and China with Chinese Vice Premier Liu He with Wednesday, Jan. 15, 2020, in the East Room of the White House. Vice President Mike Pence attends.(Official White House Photo by D. Myles Cullen)
Alex Henderson
February 21, 2020 The Right Wing

Yet another close associate of President Donald Trump was sentenced to federal prison when, on February 20, Judge Amy Berman Jackson sentenced veteran GOP operative Roger Stone to three years and four months on charges ranging from witness tampering to lying to Congress. Other Trump associates who are either serving long prison sentences or awaiting sentencing range from Paul Manafort (Trump’s former 2016 campaign manager) to Michael Cohen (Trump’s former personal attorney and “fixer”) to former National Security Adviser Michael Flynn. But how much time these Trump associates will actually spend behind bars remains to be seen: Trump has the power to pardon Stone and other allies who have either been convicted of or confessed to crimes in federal court, although Cohen (who is serving a three-year sentence) has turned against Trump in a big way and stressed that he has no desire for a pardon.

Here are some Trump associates who are candidates for presidential pardons.

Trump has not ruled out the possibility of pardoning Stone, who he believes was railroaded by the “Deep State” and never should have been prosecuted in the first place. When the U.S. Department of Justice (DOJ), on February 12, issued a sentencing memo that recommended seven to nine years in prison for Stone, Trump was furious and expressed his anger on Twitter — denouncing that recommendation as a “miscarriage of justice.” And the following day, the DOJ issued another sentencing memo and recommended a much more lenient sentence. Four federal prosecutors expressed their outrage by resigning from Stone’s case, and one of the four resigned from the DOJ altogether.

Is this the Judge that put Paul Manafort in SOLITARY CONFINEMENT, something that not even mobster Al Capone had to… https://t.co/cYiqFNRnT1
— Donald J. Trump (@Donald J. Trump) 1581472030.0

If Trump grants him a presidential pardon — which he certainly has the power to do — Stone could avoid his federal prison sentence. But this raises a question: could Stone, who lives in Florida, be prosecuted in an individual state? Trump has the power to pardon those who have been convicted of federal crimes, but he doesn’t have that power at the state level.

Manafort is not only a long-time Trump associate, but also, a long-time Stone associate: in 1980, Manafort, Stone and GOP lobbyist Charles R. Black, Jr. founded the right-wing Washington, D.C. lobbying firm Black, Manafort & Stone. And like Manafort, he has faced major legal woes: Trump’s former campaign manager, now 70, is serving seven and one-half years in prison and has been convicted of or pled guilty to federal crimes ranging from obstruction of justice to witness tampering to tax and bank fraud. But despite all that, Trump believes that Manafort — like Stone — has been railroaded by the “Deep State.” And it’s quite possible that Trump will pardon him at some point.

The key word where Manafort’s legal woes are concerned is “federal”: in March 2019, Manhattan DA Cyrus Vance, Jr. indicted Manafort on non-federal charges that included mortgage fraud — which means that Manafort could still end up in a state prison even if Trump pardoned him at the federal level. But Vance’s critics argued that the indictment was political and raised double jeopardy concerns. And in December 2019, Justice Maxwell Wiley of the New York State Supreme Court threw out Vance’s charges against Manafort — declaring, “Basically, the law of double jeopardy in New York State provides a very narrow window for prosecution.”

In 2017, Michael Flynn pled guilty to lying to the FBI in connection with former Special Counsel Robert Mueller’s investigation into Russian interference in the 2016 presidential election. However, his sentencing has been postponed several times, and Trump’s former national security adviser has yet to be sentenced. On January 7, federal prosecutors issued a sentencing memo recommending that Flynn receive a sentence of up to six months. But Flynn has asked to withdraw his guilty plea. And in a court filing in late January, federal prosecutors appeared to back away from the prison recommendation and said that probation would be a “reasonable sentence” for Flynn.

If Flynn were sentenced to six months in federal prison, Trump would have the power to pardon him. And some type of state-level prosecution seems unlikely: although lying to the FBI is no small matter, Flynn’s legal problems pale in comparison to those that Manafort has faced. Moreover, the DOJ appears to favor leniency at this point.