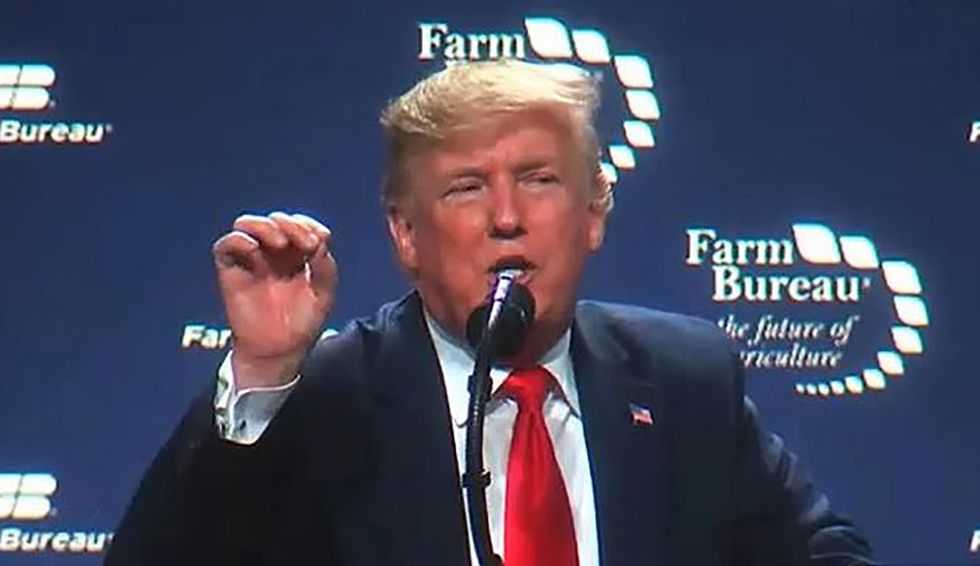 Reuters’ Sarah N. Lynch broke a big story on Monday morning highlighting one of the more outrageous examples of the Trump administration’s penchant for rewarding supporters and punishing opponents:

The groups in question, the Nevada-based Hookers for Jesus, and the South Carolina-based Lincoln Tubman Foundation, had their grants pushed through by Katharine Sullivan, head of the Orwellianly named Office of Justice Programs, against the formal recommendations of career Justice Department officials which had been made based on the reporting of outside experts. The two recommended organizations that were pushed aside, Chicanos Por La Causa and Catholic Charities of the Diocese of Palm Beach, appear to be victims of a political vendetta. Per Lynch:

Chicanos Por La Causa has opposed the Trump administration’s immigration policies. The head of Catholic Charities in Palm Beach has participated in past Democratic National Committees as a delegate or standing committee member.

Meanwhile, Hookers for Jesus and the Lincoln Tubman Foundation have right-wing Christian bona fides in spades. The latter’s founder is the daughter of a 2016 primary election Trump delegate. But what blew up into one of Twitter’s top trends Monday night was the offensively named Hookers for Jesus, founded by born-again Christian Annie Lobert, who participated in a panel discussion on “Saving Souls in Sin City: The Secret Life of Ministry in the Party City” at last September’s Religion News Association Conference in Las Vegas.

According to Lynch’s report, Lobert’s previous grant funding “was not renewed in 2018 after the state obtained Hookers for Jesus program manuals saying it was ‘mandatory’ for guests of the group’s shelter, Destiny House, to attend services and volunteer at a specific church.” Furthermore, “Its staff training manual said homosexuality is immoral and abusing drugs for pleasure is ‘witchcraft.’”

As a survivor of Christian school indoctrination I’m far from indifferent to the topic of religious indoctrination and coercion, and I find it particularly disturbing when—as happens all too often in the United States—believers use social programs and public goods, often with state and federal money, to control people and to advance their religious agendas. While most of the public shrugs, for example, the Christian Right has come to dominate sex education in America’s public schools, while also receiving taxpayer money for Christian schools that teach “alternative facts.” Right-wing Christians are also widely known to abuse addiction recovery programs for the purposes of proselytizing to captive audiences and forcing conformity to their religious norms.

The ensuing Twitter storm revealed not only how fed up so many are with this kind of corruption, but it also helped to locate this episode in the larger context of taxpayer supported religious abuses:

While opposition to Hookers for Jesus is clearly more visible on Twitter than support, a few supporters did turn up to defend the organization against the deluge of criticism.

Most awkwardly, and probably unwisely, Annie Lobert herself took to Twitter to defend her organization, both under her own account and under the Hookers for Jesus account. Despite all the evidence to the contrary obtained by government officials and Reuters, Lobert denies that Hookers for Jesus coerces anyone:

Most awkwardly, and probably unwisely, Annie Lobert herself took to Twitter to defend her organization, both under her own account and under the Hookers for Jesus account. Despite all the evidence to the contrary obtained by government officials and Reuters, Lobert denies that Hookers for Jesus coerces anyone:

It’s always good to see attention being drawn to corruption, and it’s equally important for the American public to understand the extent to which this president pursues the agenda of conservative, mostly white evangelicals and radical traditionalist Catholics. Theocrats and kleptocrats make for natural bedfellows as I’ve argued in Playboy and elsewhere. Despite all the hand wringing and pearl clutching of pundits supposedly seeking to understand how Christians can support such a corrupt and sinful president, there’s no contradiction whatsoever in the behavior of these authoritarian believers whose version of Christianity is intertwined with white supremacist patriarchy.

When it comes to programs for those who need it most, authoritarian Christians often have a large degree of control, which they often abuse. This was a problem in America long before Trump came on the scene, but under Trump it has only gotten worse.