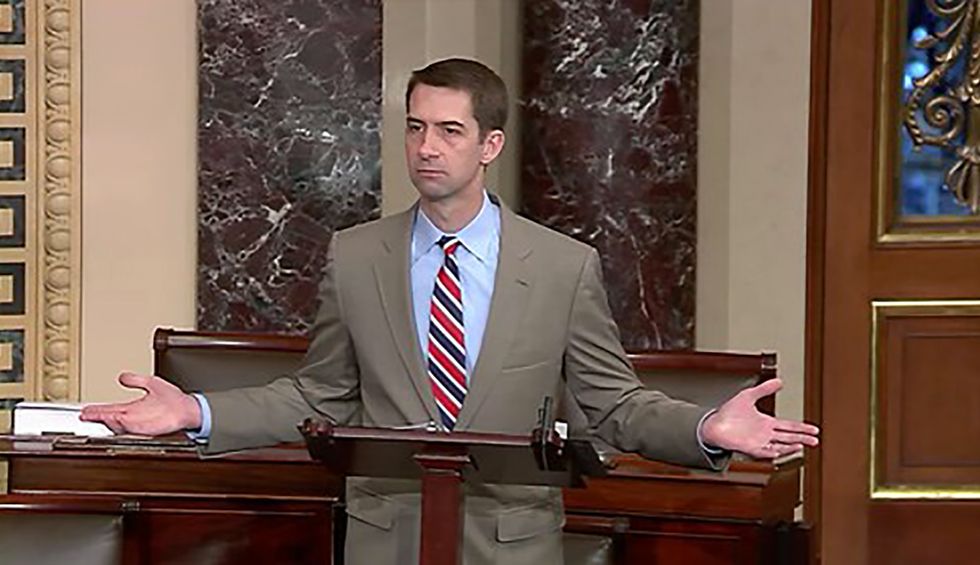 The death toll from coronavirus, according to Al Jazeera, has reached 1770. Most of the deaths have occurred in Mainland China, and Sen. Tom Cotton of Arkansas has been promoting a debunked conspiracy theory that coronavirus originated in a laboratory in Wuhan, China — which has been named the epicenter of the outbreak.

Appearing on Fox News’ “Sunday Morning Futures” over the weekend, the Republican senator asserted that the Wuhan National Biosafety Laboratory is near a market that some scientists initially believed was a starting point for coronavirus.

“We don’t know where it originated, and we have to get to the bottom of that,” Cotton told Fox News. “We also know that just a few miles away from that food market is China’s only biosafety level 4 super laboratory that researches human infectious diseases.”

Cotton acknowledged, however that there is no evidence that coronavirus started in the Wuhan National Biosafety Laboratory.

“Now, we don’t have evidence that this disease originated there,” Cotton told Fox News. “But because of China’s duplicity and dishonesty from the beginning, we need to at least ask the question to see what the evidence says. And China, right now, is not giving any evidence on that question at all.”

But according to Richard Ebright, a professor of chemical biology at Rutgers University in New Jersey, there is no evidence that coronavirus is man-made or was unleashed as some type of bioweapon.

Ebright told the Washington Post, “There’s absolutely nothing in the genome sequence of this virus that indicates the virus was engineered. The possibility this was a deliberately released bioweapon can be firmly excluded.”

Vipin Narang, who has a background in chemical engineering and is an associate professor at the Massachusetts Institute of Technology, told the Post that it is “highly unlikely” that the general public was exposed to coronavirus because of an accident in a lab.

Narang also said of Cotton, “These kinds of conspiracy theories are unhelpful…. Cotton should spend more time funding the agencies in the United States that can help contain and combat the virus rather than trying to assign blame.”