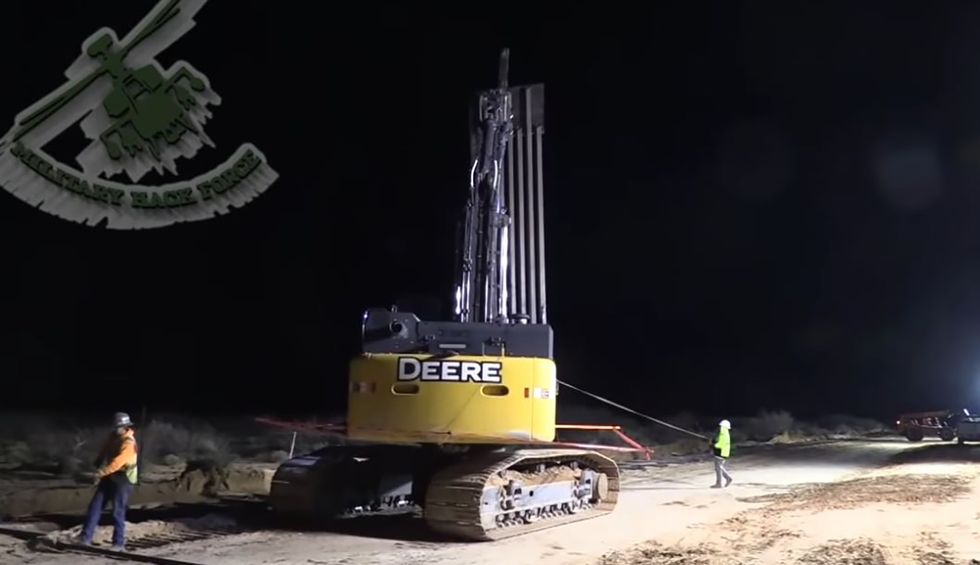 For two decades, Carlota Lugo has run her small family store in this tiny border town that sits just a block away from the Rio Grande.

She’s used to the stray dogs that bark at U.S. Border Patrol agents as they patrol the neighborhood, and she doesn’t flinch at the Customs and Border Protection helicopters that regularly buzz overhead.

But Lugo and her neighbors are closer to dealing with another border security measure that hasn’t been seriously considered in this part of Texas in the past: President Donald Trump’s border wall.

Residents of Webb County, which includes Laredo to the northwest of Rio Bravo and the small town of El Cenizo to the east, have debated the potential effects of a border barrier in their backyards since former President George W. Bush signed the Secure Fence Act in 2006.

The Laredo area hasn’t seen the kind of construction that's happened in El Paso and the Rio Grande Valley after that 2006 measure set off an initial round of fence-building. But that’s changing quickly as Trump continues his election-year double-down on one of his signature promises that hasn’t come to fruition as quickly as he wanted.

Lugo, like most Webb County residents, argues that a wall won’t be effective. But she said that it won’t affect residents' daily routines any more than the constant presence of Border Patrol has.

Undocumented immigrants “are going to fight to get across even if they put up a wall,” she said in Spanish. “The illegals that just want to cross and live their lives, they are going to know how to do it. But if [Trump] wants it, what are we going to do?”

As of April 2019, only about 77 acres of land in Webb County was between a border barrier and the Rio Grande. That’s compared with more than 10,000 acres in Hidalgo County and more than 12,000 in Cameron County, according to a mapping study by Kenneth Madsen, an associate professor of geology at Ohio State University.

But the Trump administration plans to use some of the military funds it diverted in September to build about 52 more miles of fencing in Webb County, the Laredo Morning Times reported. And earlier this month, the administration announced an additional $3.8 billion would be diverted from the Pentagon's budget for border barrier construction.

In a 3-2 vote in late January, the Webb County Commissioners Court approved a measure that allows Customs and Border Protection officials access to a narrow 15-acre strip of county-owned land on the southern end of Rio Bravo. CBP officials requested access to conduct "environmental assessments, property surveys, appraisals and any such work" for potential property acquisition, according to the court's agenda item.

Webb County Judge Tano Tijerina said the area that the federal government is eyeing for wall construction is only about 65 feet wide.

Tijerina, who opposes the wall but voted yes on the measure, acknowledged that to some county residents, the concession might as well include the entire riverfront.

“Some of the people are hating on me, and that’s fine because I said yes, I understand how it sounds [to them]. They say, ‘You’re against the wall but you give them access?’” he said. “We’re talking about the federal government. What are we going to tell them? The federal government does what they are going to do.”

“We can be optimistic all day long, but the feds have their own agenda,” he said. “Especially if it’s coming down from a president. It is what it is and I want to be as optimistic as I can, but I also have to be real.”

Webb County Commissioner Rosaura “Wawi” Tijerina was a no vote on the measure. As the court’s senior member, she’s been at the forefront of the issue longer than her colleagues but hasn’t wavered in her opposition.

“Even though President Trump is adamant about the wall and continues to work on the wall, I feel that it should not separate us from our neighbor city [in Mexico]," she said. "We should be working together for one common goal."

Gilberto Aguilar Jr., the new mayor of Rio Bravo, was elected just weeks ago and told The Texas Tribune he was still trying to wrap his head around the situation.

“Who gets affected?" he said. "We have a river where people want to fish, we don’t have that resource there if there’s a big wall there."

But Aguilar said had it been his choice, he likely would have approved the access for the same reasons the county did.

“In this sense, I would have been in the same boat just because I don’t want a lawsuit,” he said.

In downtown Laredo, City Council member Alberto Torres Jr. said the council has taken the opposite approach and plans to fight the wall.

“Screw the federal government, and it’s 'No,' " Torres said. "If you’re going to get it done either way, then let’s play this tug-of-war.”

Torres said stonewalling the federal government is part of a bid to slow down the process.

“The best case scenario is we buy enough time to see what happens in the November election,” he said. “Worst case scenario is the president gets reelected and the federal government moves forward, so with us it’s a waiting game.”

He said any looming court battles won’t affect the city’s budget because their in-house city attorney can handle the workload.

For Torres, it’s also a matter of principle. Although some Laredoans support a barrier, the vast majority oppose it, and it’s his duty to represent them, he said.

“For us it’s always been resistance. I think in the public view and the public eye, the city is expected to do more for the constituents than the county,” he said. “So there are very different expectations.”

The Laredo Border Patrol sector headquarters did not respond to a request for comment about the council members' comments and about the number of other landowners who have granted federal officials access to private property.

Tijerina, the county judge, said his interactions with Border Patrol have been nothing but positive.

"I’ve been really impressed with the way they’re handling everything,” he said. “They’ve been very, very vocal and respectful in that sense.”

But he insists that things are still very preliminary. “They have not mentioned the word 'build' at all, so right now it’s survey, survey survey,” he said.

But whatever the difference in tactics, local government leaders agree that a wall sends a bad message to Texas’ southern neighbor and the country’s largest trade partner.

“It’s kind of slapping [Mexico] in the face. Do we really need to do something like that?” Tijerina said. “We respect the feds, we work really well with them. But it’s heartbreaking to see this.”

This article originally appeared in The Texas Tribune at https://www.texastribune.org/2020/02/25/webb-county-laredo-trump-border-wall-construction.