The Putin defense: How far will Donald Trump go now to stay in power? 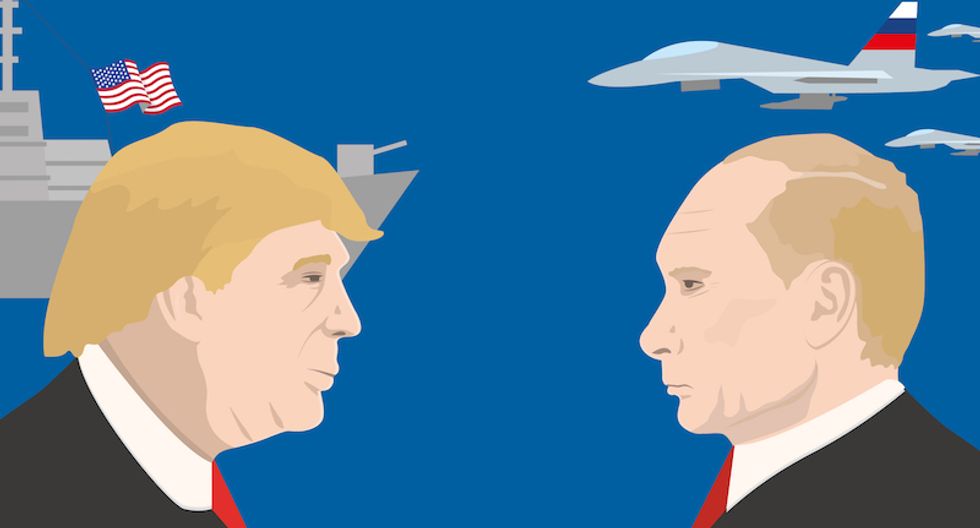 Donald Trump never faced even the tiniest chance that two-thirds of the United States Senate would vote to find him guilty in the impeachment trial we're now being told will come to its ignominious end in the middle of next week. You don't need to put on a defense when you already know the outcome of the trial. He could have gone with what you might call the "potted plant defense," sending Jay Sekulow or Pat Cipollone or even one of the lesser lights on his team to essentially sit there by himself and watch the House managers set their hair on fire. He didn't even need to ask for what amounted to a directed verdict of acquittal. He had all the Republican votes he needed right from the start.

Trump didn't bother merely swatting aside the rule of law and the Constitution. No, he dropped all pretense and went full-on authoritarian, tapping no less a figure than Jeffrey Epstein pal Alan Dershowitz to present the Putin Defense: If it's good for Trump, it's good for the country, and that means it can't be illegal.

I guess we always knew it would come to this. How else can you account for Trump's parade of obsequiousness to Vladimir Putin? It goes back to December of 2015, when Trump was running for the Republican nomination. He appeared on "Morning Joe" not long after Putin had praised him as "brilliant" and "talented." Host Joe Scarborough asked him if he still accepted Putin's praise in the face of his violent policies.

"He's running his country, and at least he's a leader," Trump snapped, stunning Scarborough and co-host Mika Brzezinski. "But again, he kills journalists who don't agree with him," Scarborough stammered. "I think our country does plenty of killing also, Joe," Trump replied calmly. "There's a lot of stuff going on in the world right now, Joe. A lot of killing going on and a lot of stupidity and that's the way it is."

Trump heaped praise on Putin during the 2016 campaign, memorably making the "Russia, if you're listening…" request that they do him the favor of looking for Hillary Clinton's emails in return. Remarkably, it got worse after he took office. There was the infamous G20 Summit in Helsinki in 2018, when Trump took Putin's word that Russia had not interfered in the 2016 election, over the findings of his own intelligence agencies. He went on to blame the Mueller probe for the tensions in U.S.-Russia relations at a time when Russia had invaded and seized Crimea and was waging a war for territory in eastern Ukraine. He waited less than a year to threaten Ukraine by withholding military assistance against the Russians unless the leaders in Kyiv corruptly helped with his re-election campaign.

He is dismissive, even hostile, to European democratic allies and admiring of iron-fisted dictators from Warsaw to Budapest. But his favorite dictator of all is the former KGB officer who rules Russia like a 21st-century Stalin. Trump, whose popular support has never been above the mid-40s in the polls and lost the popular vote in the last election by nearly three million, practically slathers at the thought of winning "elections" like Putin, who received 72 percent of the "vote" in 2004, 64 percent in 2012 and 77 percent in 2018.

The Putin defense wasn't some lame variation on "I did it, and so what?" From 2017 to 2019 we had a special counsel investigating whether Trump had corruptly conspired with Russians in his election campaign in 2016. But according to the Putin defense, that kind of investigation will never be necessary again, because asking foreign leaders for help in your election for president is now business as usual and completely legal. It turns out Trump didn't need Attorney General William Barr to bury the Mueller report. All he needed was for the House to impeach him and the Senate to find him innocent. Anything Trump does from now on to get himself elected will be A-OK.

Remember Bridgegate? That was when New Jersey Gov. Chris Christie punished the mayor of Fort Lee for not supporting him by shutting down several lanes of the George Washington Bridge during rush hour. You'd think that would be illegal, right? Not according to the Putin defense. Take some Midwestern governor who decides he's not supporting Trump. Maybe he should be thinking about those highway funds that will be mysteriously held up, or the Medicaid money that might not flow so freely into state coffers.

Donald Trump has already shown how easy it is to be stingy with disaster relief for hurricanes in Puerto Rico and fires in California. Just imagine what it's going to be like for blue states after the Senate pats Trump on the back and says, You know what, pal? You go right ahead and do what you want to get re-elected because it's in the national interest! It's OK to beat up on needy countries like Ukraine to get what you want. Same goes for needy states. Go ahead and delay those disaster funds! What's good for Trump is good for America!

"Every public official I know believes" their election "is in the public interest," Dershowitz assured the senators. He took a half-assed pass at carving out an exception when it came to personal financial gain, but Trump has been driving a truck through that loophole since his inauguration, when he raised $107 million and paid $26 million to a California company owned by pal of Melania Trump's for "event planning." Nobody knows where that $26 million went. At least some of it appears to have overpaid for rentals of ballrooms in the Trump International Hotel, and thus ended up in Trump's pocket.

More recently, Trump has faced criticism for awarding a $400 million contract to build a section of the wall on the Mexican border to a North Dakota company owned by a political supporter who has donated to his campaigns. But that's OK, according to the Putin defense, because building the wall is in "the national interest." If you don't think that Trump can come up with ways not only for the national interest to coincide with his own interest, but to line his own pockets, you too can be a senator.

Vladimir Putin presides over a mock democracy with mock elections and a mock free press and a mock economy that keeps his oligarch buddies in rubles and the citizenry in rags. He has ordered the deaths of journalists who displease him and poisoned those he thinks have been disloyal. Right now he is maneuvering to keep himself in power indefinitely.

Donald Trump used the Putin Defense for a reason. Do the words, "exercise of emergency powers" send a chill down your spine? If not, you've got company. Put on your MAGA hat and sign up for the rally and learn the words to "Donald Trump Uber Alles."

Or call up your friends and turn out and vote. It's one or the other