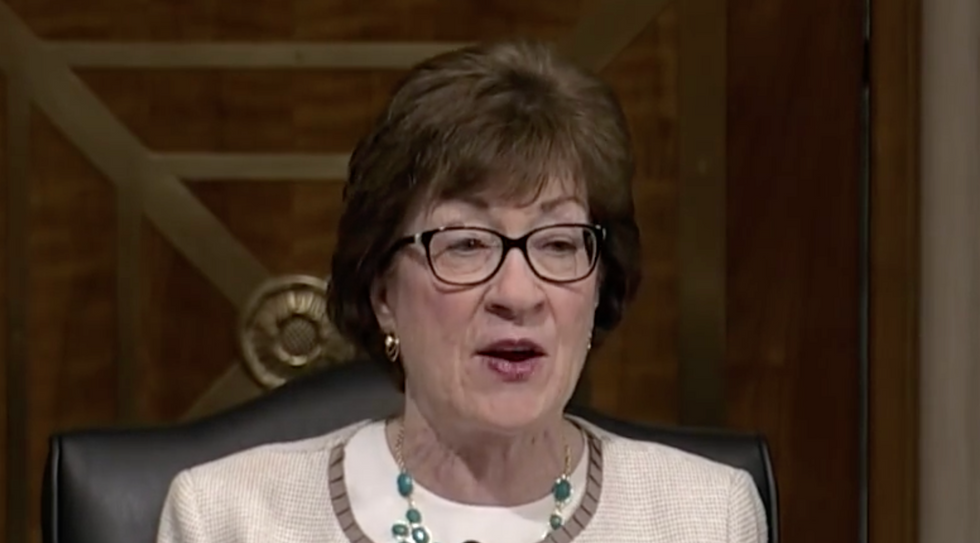 Republican Sen. Susan Collins of Maine earned mockery and derision on Tuesday when she defended her upcoming decision to vote for acquitting President Donald Trump in his impeachment trial.

She added: "I believe that he will be much more cautious in the future."

It didn't take long, though, for the president to completely undermine her.

During a meeting with TV anchors ahead of the State of the Union, Trump was asked directly about Collins' claim that he'd learned his lesson. Trump made clear he hadn't. He said he did nothing wrong, the Washington Post reported, adding his now-common refrain of his July 25 conversation with Ukrainian President Volodymyr Zelensky: "It was a perfect call."

Other Republicans have made similar remarks to Collins, criticizing the president mildly for his efforts to get Ukraine to investigate former Vice President Joe Biden while still insisting that his conduct is not impeachable. That claim on its own is highly dubious, but its error is compounded by the fact that Trump — like many of his defenders in the House of Representatives — has repeatedly insisted that he did nothing wrong. In fact, he and some of his defenders argue that he was obligated to push Ukraine to investigate Biden.

This makes the moderate Republican position — that Trump did some wrong but he shouldn't be removed — very difficult to sustain. Because without a hint of remorse from Trump, there's no reason to believe he won't try to aim criminal investigations at his political opponents once again. And indeed, he's already reportedly doing just that.