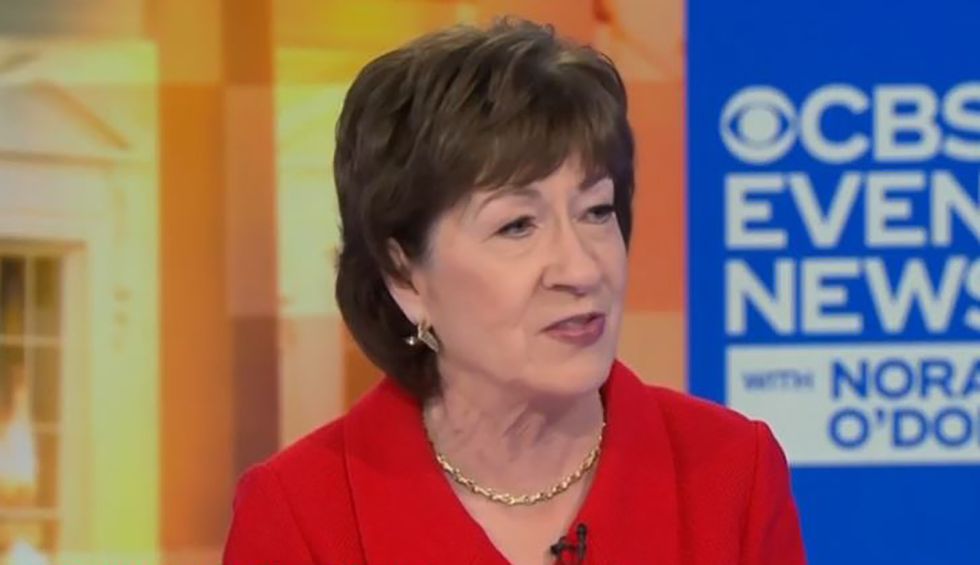 At a Republican dinner in Lewiston, Maine, on Saturday night, Sen. Susan Collins gave a rousing welcome to former Gov. Paul LePage, whined about dark money being spent against her, and lied about the damage done by the 2017 tax scam bill, for which she provided the deciding vote. Despite the fact that reporters were barred from the event, the Lewiston Sun Journal's Steve Collins stuck around and listened through the door. "Paul LePage is back," Sen. Collins proclaimed, celebrating the former governor, who told the crowd he was considering another run for the office. You remember LePage, the guy who loved to call himself "Trump before there was a Trump" and had the record as governor to back it up? Collins had sort of an uneasy truce with him throughout his time in office, but now it's a full embrace.

Collins is not going to take any chances on a primary challenge with a few weeks to go until Maine's filing deadline. To that end, she went full Republican on Saturday night, including saying that dark-money attack ads against her were being funded by George Soros, among others. Which is fine, except for that part where she's taking all that dark-money help in what looks a lot like a bribery scheme from a company and its officers that she's awarded federal contracts to.

Collins complained that the ads misled about what the tax scam bill did, saying that the bill helped 90% of Mainers pay less in taxes and spurred economic growth, while not making the cuts to Medicare and other healthcare programs the ads claim. The actual effects of the tax law mean that the lowest-income Mainers will be paying $340 more in taxes by 2027, while the richest 1% will save $4,640. Ouch.

Collins also complained that the ads lied about the cuts to social insurance programs, and specifically health care, that could result. But Collins was the one who made a big show out of opposing the bill until she secured a "promise" from Mitch McConnell that there would be votes to bolster the Affordable Care Act because she was worried that it undercut the law by getting rid of the individual mandate. She wanted votes on bills to protect people with pre-existing conditions. McConnell broke his promise to her—those votes never happened. In fact, Trump has been pushing policies that undercut those protections. And the regular Republican talk about having to cut Social Security and Medicare and Medicaid because of the new record-smashing deficit—thanks to the tax cuts—is back.

But, she told the Republican crowd, she specifically ensured that Medicare cuts would not happen. In that "promise" she secured from McConnell that he promptly broke. What Maine saw on Saturday night was vintage Collins. She embraced her special sort of pathetic victimhood while at the same time telling out-and-out lies about her record and what she represents. She told the crowd that she was representing all the people in Maine who tell her they want an end to "the vitriol and divisiveness" in Washington and for politicians to "get back to work on the issues that affect our lives." She said that while celebrating the most divisive politician the state has seen in LePage.