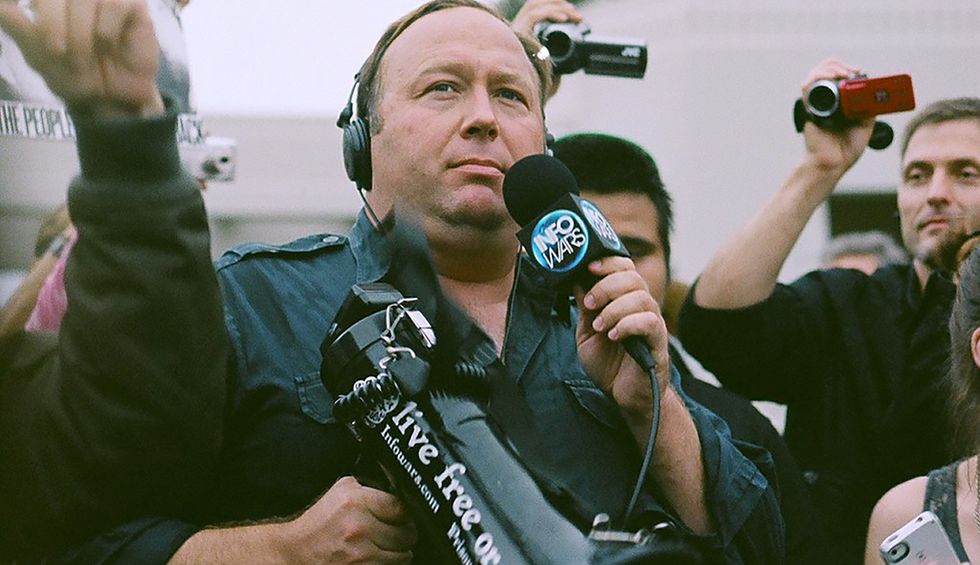 “Infowars” host Alex Jones, along with others on the alt-right, have long been promoting the conspiracy theory that soy is a sinister left-wing plot designed to turn American men effeminate and make their bodies estrogenic. This type of thinking continues with claims in right-wing media that the consumption of plant-based “meat” will cause men to acquire feminine characteristics. And journalist/physician James Hamblin takes a look at these fears this week in an article for The Atlantic.

Although Dr. Hamblin’s article doesn’t specifically mention Jones, “Infowars” or the “soy boy” conspiracy theory, it addresses claims that plant-based “meat” is highly estrogenic and can cause men to grow female breast tissue. This claim, Hamblin notes, was promoted in the past by South Dakota-based cattle veterinarian James Stangle, who writes a column for a local trade publication called the Tri-State Livestock News. Comparing Burger King’s plant-based Impossible Burger to its well-known Whopper, Dr. Stangle told the Western Journal, “The Impossible (Burger) has 44 MG of estrogen, and the Whopper has 2.5 NG of estrogen.”

“On the whole, concerns about soy and sexualization draw from scattered cases and isolated data points,” Hamblin explains. “Claims like Stangle’s play into concerns more fundamental than a literal fear of estrogen. The myth of physical feminization has its basis in existential concerns about power and status.”

Hamblin contacted Stangle for his Atlantic article, and he is admitting that his claims about the hyper-estrogenic effect of plant-based “meats” were inaccurate. The veterinarian told Hamblin, “I wrote my article for a small local paper, never expecting it to go viral. When it did, I fact-checked myself and issued a retraction. As is usually the case, the retraction didn’t get much traction.”

“To say that soy doesn’t contain estrogen is technically accurate,” Hamblin notes. “Some plants do contain compounds that are similar to estrogen, called phytoestrogens. Soy contains relatively a lot of them. Phytoestrogens can mimic the effects of estrogen in human cells, but the significance of that effect on the whole human body is unclear.”

Hamblin concludes his article on a humorous note, mocking fears that consuming some foods can men to become hyper-estrogenic and grow breast tissue. But he gives Stangle credit for having enough integrity to admit he was wrong.

“It’s rare to hear anyone admit that they made a mistake when arguing for a diet they believe in,” Hamblin writes. “Once a way of eating becomes central to our identities, we default to believing whatever evidence supports the fact that we’ve chosen wisely and are living virtuously. The world is ordered, and our understanding of it is coherent. Plus, admitting you’re wrong can make you grow breasts. I read that online.”