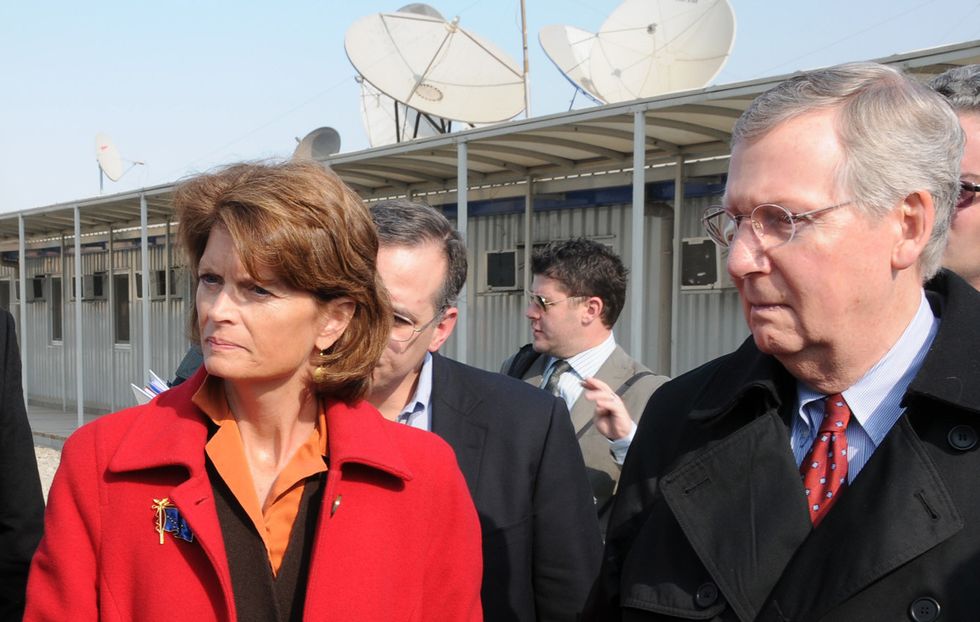 "To know what is the right thing to do and not do it is the greatest cowardice," according to Confucius.

Even after years of pouring false hope into the prospect that so-called moderate or retiring Republican senators would gain a conscience and hold Donald Trump to account in some form, Democrats did it again this week, looking to a handful of wavering GOP senators to demonstrate a semblance of righteousness. And once again, Republicans made clear that they'll put party over country each and every time.

President Trump is almost certainly headed for a speedy acquittal in his Senate impeachment trial now that Republican leaders have secured assurances from Lamar Alexander of Tennessee and Lisa Murkowski of Alaska that they would not break ranks to request direct witness testimony.

To justify decisions they would have made anyway, the pair of Republicans offered stunningly offensive rationales.

Alexander, who will retire when his term ends next year, released an Orwellian statement late Thursday night admitting that House managers had proven their case about Trump's public corruption but arguing that such brazen election fraud is merely "inappropriate," and not impeachable:

Even more bizarrely, Murkowski appeared to blame Sen. Elizabeth Warren, D-Mass., a Democratic presidential candidate, for pushing her to block witnesses. On Thursday, Warren questioned whether the credibility of the Supreme Court was at stake if Chief Justice John Roberts presided over an impeachment trial perceived to be a sham because it refused to allow witnesses or direct evidence.

"The House chose to send articles of impeachment that are rushed and flawed," Murkowski explained. "I have come to the conclusion that there will be no fair trial in the Senate. I don't believe the continuation of this process will change anything. It is sad for me to admit that, as an institution, the Congress has failed. It has also become clear some of my colleagues intend to further politicize this process, and drag the Supreme Court into the fray. ... We have already degraded this institution for partisan political benefit, and I will not enable those who wish to pull down another."

I asked @RepAdamSchiff: At time when many have lost faith in govt, does the fact that the Chief Justice is presidin… https://t.co/yvHKWXz2IW
— Elizabeth Warren (@Elizabeth Warren)1580425912.0

Murkowski's statement makes no sense, of course. She argues that there can't be a fair trial in the Senate so there's no point in having a trial at all — but then sides with the people who have made it grossly unfair by blocking witnesses and documents. Voting to hear witnesses would at least have been a gesture in the direction of a fair trial.

Only two Republicans, Susan Collins of Maine, who is up for re-election this fall, and Mitt Romney of Utah, announced that they would vote to hear from witnesses from both sides. "I believe hearing from certain witnesses would give each side the opportunity to more fully and fairly make their case, resolve any ambiguities, and provide additional clarity," Collins said in a statement. But 51 other Republicans in the U.S. Senate lacked the courage to break with Trump, and hid behind platitudes and excuses that insult the nation's intelligence.

Murkowski and Alexander could just have issued their corrupt votes without dressing them up in a parade of lies. There was no more perfect article of impeachment that would have led to a different result. This was all a charade to begin with. Along with Collins and Romney, Murkowski only voiced concerns about the process after Senate Majority Leader Mitch McConnell forced the issue of evidence to the end of the trial, when he knew his party would likely have the votes it needed. In the real world, a trial with no witnesses was a foregone conclusion because from the beginning Republicans were determined to cover up for Trump.

If there's anything Trump's presidency has proven true, it's that Republican legislators simply don't care about their legacies. Money and power, right now, are the only things that matter. Trump and McConnell may not be natural allies in the ideological realm, but they are both about winning at any cost. The winners, after all, get to write history. That includes proclaiming that anything negative said about their deeds is fake news, and that those who stood in opposition and sought the truth were the real criminals.