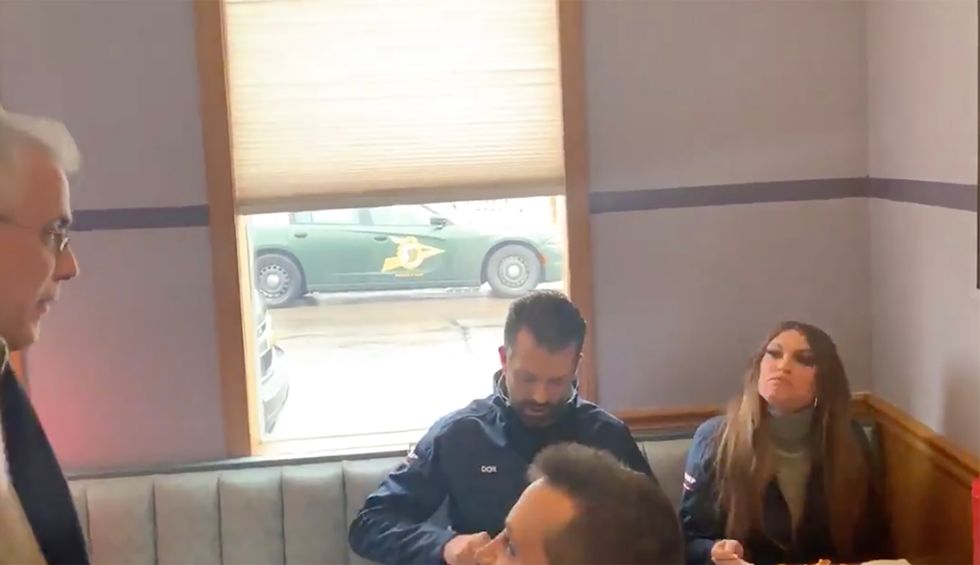 President Donald Trump and his allies become very defensive whenever they are described as being helpful to the Russian government in any way. And the president’s son, Donald Trump Jr., immediately became defensive when Mother Jones’ Washington bureau chief, David Corn, asked him about an alleged meeting with a “Russian emissary” (who supposedly had dirt on Hillary Clinton) during the 2016 presidential race.

Trump Jr. was eating at a diner in New Hampshire when Corn approached him. When Corn brought up the Russian emissary, the president’s son responded, “We’ve spoken about this 1000 times. I’ve testified about it. I’m like Hunter Biden.”

Trump Jr. went on to say, “I’m allowed to have a conversation with people, aren’t I? Isn’t that protected?..... I answered your question.”

At the Chez Vachon diner in Manchester, I asked ⁦⁦@DonaldJTrumpJr⁩ why he thought it was appropriate to meet with a… https://t.co/4F2bbikXuH
— David Corn (@David Corn)1581437278.0

Corn (who posted a video of his conversation with Trump, Jr. on Twitter) pressed on, asking, “Of course, you could do it. I’m asking why you thought it was appropriate, because you were told it was part of a Russian government effort to help the campaign.” And Trump Jr. responded, “See you later,” making it clear that he wanted Corn to leave.