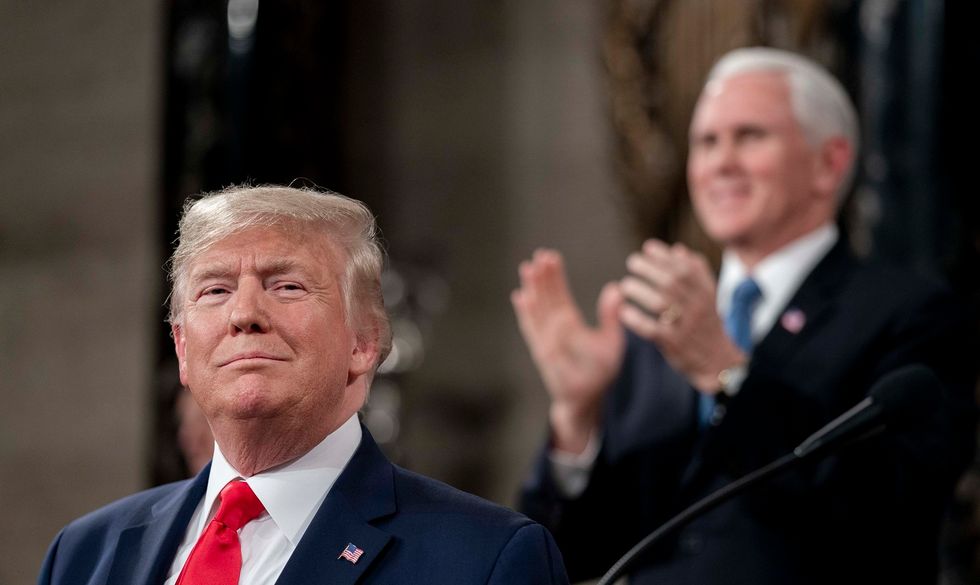 Seven days after he took office, Donald Trump issued Executive Order 13769 which barred migrants from a handful of Muslim-majority countries from entering the U.S. Hundreds of travelers were detained as they arrived here and tens of thousands of people had their visas suddenly revoked. For many Americans, it was clearly a bridge too far. Some had hoped that he would grow into the job, or that his bigoted campaign rhetoric would give way to a more responsible tone after he won, and the Muslim ban was evidence that those hopes had been misplaced as Trump moved to codify xenophobia.

With minimal organizing, thousands of people took to the nation's airports to protest the policy.

Today, three years and three weeks later, Trump is crowing on Twitter about a New York Times story detailing how he's basing his re-election campaign on his simmering resentments and paranoia. He is using customs and immigration enforcement to openly extort New York state into dropping investigations into his personal businesses. He's brazenly retaliating against his own regime officials for testifying in his impeachment hearings. Meanwhile, his Attorney General, hand-picked after writing a brief arguing that it's kosher for a president to exercise his or her powers toward corrupt purposes, is overruling career prosecutors to grant leniency to Trump's henchmen when their crimes are unearthed. While federal investigators look at potential crimes committed by Trump's personal attorney as he sought to fabricate a scandal about one of Trump's Democratic foes, others within the agency are simultaneously colluding with that very attorney to advance that effort. Our nation's top law enforcement agency has adopted a relentless focus on finding support for the president's* unhinged conspiracy theories.

As Trump rants and raves, there are no crowds gathering spontaneously outside of US Attorney's offices around the country to protest Bill Barr's unprecedented corruption of the Department of Justice, . We may be outraged, but we seem to run out of gas. Trump's behavior is so consistently venal and outrageous that we've become inured to it. Abuses of power that would be huge scandals under any other president of either party elicit ritualistic condemnations, but are ultimately just Trump being Trump.

Overwhelming our sense of decency with a constant stream of outrageous comportment is Trump's super-power. It's impossible to even keep up.

In this crazy world, almost nothing is said about the fact that @realDonaldTrump is rehiring his 29-yr-old former b… https://t.co/FRDomF4ec5
— David Axelrod (@David Axelrod)1581684564.0

Speaking of the DOJ, an agency "anti-human trafficking grant program is facing internal complaints, after two nonprofits were denied funding in favor of two less established groups whose applications were not recommended by career DOJ officials." According to Reuters, "the awarding of more than $1 million total to the two groups, Hookers for Jesus in Nevada and the Lincoln Tubman Foundation in South Carolina, has triggered a whistleblower complaint filed by the Justice Department’s employee union to the department’s Inspector General."

In related news, the FBI is revamping its efforts to curb homegrown terrorism after years of criticism that it downplayed or turned a blind eye to violent right-wing extremism. As part of those efforts, reports The Daily Beast, the FBI will now focus on “abortion violent extremism.” But they mean terrorists on "both sides" of the debate, despite the fact that the FBI could point "to just one episode of pro-choice-inspired terrorism—one that did not involve an actual act of violence, but rather a threat in an online comments section."

It's hard to say whether these people are just trolling us at this point...

U.S. Secretary of State Mike Pompeo met Russian Foreign Minister Sergey Lavrov on the sidelines of the Munich Security Conference on Friday in an encounter the American side apparently wanted to keep under wraps.

The State Department made no announcement of the meeting, which took place in Lavrov's own dedicated meeting room at the Hotel Bayerischer Hof, where the major annual conference of politicians, policymakers and security experts is held. Pompeo's aides also did not provide any readout after the meeting ended.

Russian journalists traveling with Lavrov were aware of the meeting in advance, and wrote about it afterward.

Late last year, the U.S. government signaled that it was about to level a new round of sanctions targeting people and entities linked to Deripaska, according to two Western officials with knowledge of the communication. Back in April 2018, the U.S. sanctioned the oligarch, who once lent millions of dollars to convicted Trump campaign chief Paul Manafort as part of a decades-long relationship between the two men. Over the following months, Deripaska’s allies made a deal with Treasury to limit Deripaska’s control over the companies in exchange for sanctions relief.... In the year since then, it’s been all quiet on the Deripaska sanctions front.

Until December, that is. What’s strange is that despite the signal, Treasury didn’t follow through and the sanctions—which would have targeted the unnamed people and entities because of their proximity to Deripaska—didn’t materialize. It’s been two months since the U.S. indicated that the new sanctions were about to come out, and there’s been no movement from Treasury on the oligarch. The two months of inaction has stirred suspicions of political interference in the sanctions process.

"Trump has proposed a 25 percent cut to the signature military fund designed to offset Russian aggression in Eastern Europe, according to the Defense Department's budget documents unveiled Monday."

We are fortunate that these malignant and corrupt ideologues aren't more competent...

The final rule that went to OMB last month is "...sprinkled with glaring numerical and spelling errors (such as “Ma… https://t.co/HzATDu1jrS
— Caitlin McCoy (@Caitlin McCoy)1581632949.0

Type Investigations has an important story about how the Bureau of Land Management has, "over the past several years, ignored longstanding requirements that stem from the 50-year-old National Environmental Policy Act; approved mines and drilling without adequate review, turning the region into a 'clearinghouse for federal permits'; and taken personnel off mining inspections in order to expedite development."

This will disappear down the memory hole in short order....

"A White House memo justifying the U.S. strike that killed Iranian military leader Maj. Gen. Qasem Soleimani in January makes no mention of an imminent threat, which was President Trump’s rationale for the attack.

Since Trump's rise to the nation’s highest office, his inflammatory language — often condemned as racist and xenophobic — has seeped into schools across America. Many bullies now target other children differently than they used to, with kids as young as 6 mimicking the president’s insults and the cruel way he delivers them.

Last week, we mentioned that a 65-degree temperature recorded at Antarctica's Trinity Peninsula set a new record for the continent.

That record appears to have held up for four days. This week, "a weather research station on Seymour Island in the Antarctic Peninsula registered a temperature of 69.3 degrees (20.75 Celsius) on Feb. 9."

And we leave you this week with a couple of pieces of good news, via the courts...