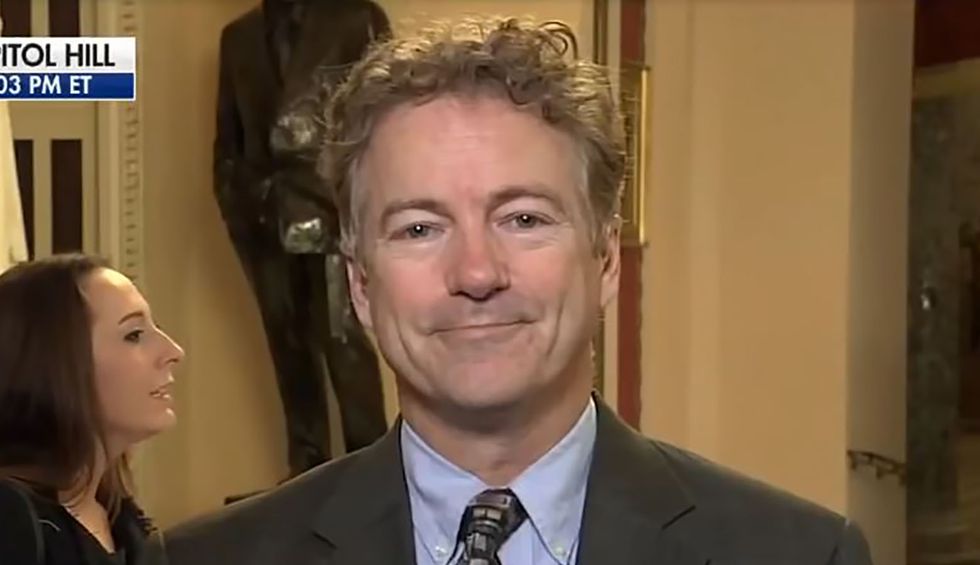 Sen. Rand Paul, R-Ky., said the name of the alleged Ukraine whistleblower on the Senate floor Tuesday as senators debated whether to remove President Donald Trump from office.

Paul tried to submit a question naming the individual to Supreme Court Justice John Roberts last week, but the Republican appointee refused to read it aloud.

"I think they made a big mistake not allowing my question. My question did not accuse anybody of being a whistleblower," Paul claimed during his speech Tuesday before reading the name of a CIA analyst alleged to be the whistleblower in conservative media. Paul also displayed the name on a poster board showing the question he submitted to Roberts.

The question was whether Intelligence Chairman Adam Schiff, D-Calif., and his staff were in contact with the whistleblower whose complaint led to Trump's impeachment. Salon has not verified the identity of the whistleblower and is not sharing the name circulated by conservative outlets and Russian media.

Paul alleged that the committee and the whistleblower were working together "to plot impeaching the president before there were formal House impeachment proceedings."

Roberts was seen pausing to read the question last week before refusing to do so.

"The presiding officer declines to read the question as submitted," Roberts said.

Paul insisted during a press conference after Roberts' decision that the question naming the alleged whistleblower made "no reference to anybody who may or may not be a whistleblower."

Paul later claimed to CNN's Manu Raju that Roberts was the one who had actually outed the individual.

"I would say the chief justice did that. By not allowing the question, he's sort of confirming to the public who it is. I have no idea who it is," he claimed. "I think it's very important that we know if there was a concerted government plot to bring the president down by a lot of employees."

Paul also argued that his Republican Senate colleagues, none of whom have named the individual, and Roberts were making selective use of whistleblower protections and the Privacy Act.

"A statue shouldn't be such that people can use — and then nobody says they know who the person is," he said. "But anybody you say might be is all the sudden protected from being part of the debate."

Paul previously shared an article naming the alleged whistleblower on Twitter and demanded that the media out the individual during a Trump rally last year.

Republicans repeatedly used the impeachment proceedings to try to get the name of the whistleblower on record in closed-door depositions and during public hearings.

Rep. Louie Gohmert, R-Texas, who serves on the Judiciary Committee, blurted the alleged whistleblower's name during a televised impeachment hearing after also dropping the name in a completely unrelated hearing on Puerto Rico.

The name was first published in a RealClearInvestigations report alleging that the Ukraine whistleblower was a 33-year-old CIA analyst who worked on the National Security Council during the Obama administration.

The complaint was reviewed, found credible and forwarded to the Justice Department by three top administration officials. In the months since, numerous current and former administration officials confirmed the allegations in the complaint were true. More recently, a leaked book manuscript by former national security adviser John Bolton claimed that Trump explicitly told him that he wanted to block aid to Ukraine until the country helped with investigations into his political rivals.

Trump has repeatedly claimed that his call with Ukrainian President Volodymyr Zelensky was "perfect," while the whistleblower got the details "almost completely wrong."

Politifact rated this claim as their lie of the year.

"Despite what Trump claims, the whistleblower got the call 'almost completely' right," the outlet wrote. "We know this from the very record of the call the president released. We know this from testimony under oath from career diplomats and other officials. And the president and his allies have told reporters that Trump did what the whistleblower suggested — urged the Ukrainian president to investigate political rival Joe Biden."

The attempts to out the whistleblower would do little to change the case presented against Trump, especially with many Republicans now admitting Trump's guilt even as they defend their votes to acquit him. But the whistleblower's attorneys have warned that attacks by Trump, Paul and other allies put their client and his family at risk.

"The identity of the whistleblower is irrelevant . . . Because our client has no additional information about the president's call, there is no justification for exposing their identity and all the risks that would follow," attorneys Mark Zaid and Andrew Bakaj wrote in a Washington Post op-ed. "Now Republican leaders in Congress are also focusing their attention on attacking the messenger and demanding public testimony from the whistleblower. This is nothing more than a diversionary tactic. For the record, we have notified both the House and Senate intelligence committees in a bipartisan manner that the whistleblower is willing to respond to any questions in writing and under oath."