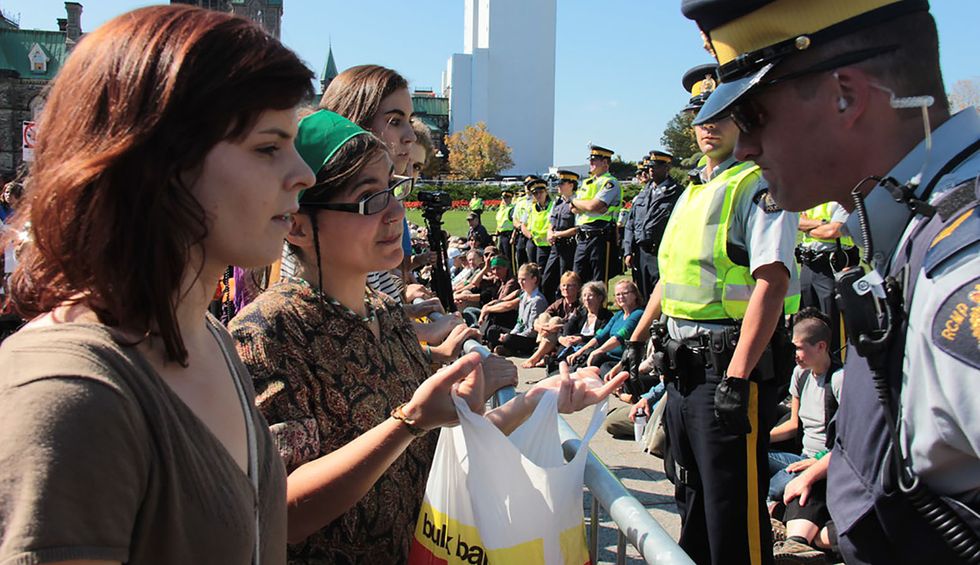 Industry drafted legislation (HB 4615) that would make civil disobedience against a pipeline or other fossil fuel projects a felony is moving through the West Virginia legislature.

The House of Delegates Judiciary Committee will hold a hearing on the legislation February 10, 2020 at 8:30 am.

Eight of the nine co-sponsors of HB 4615 have received a collective $48,050 in campaign contributions from oil, gas, electric utility and railroad interests.

Tracy Cannon of Hedgesville, West Virginia has been leading a coalition of citizens against the Mountaineer gas pipeline that cuts through the Eastern Panhandle. She’s planning to make the five hour drive to the state capitol building in Charleston for the Monday hearing and has set up a Facebook events page.

“The ‘Critical Infrastructure Protection Act’ would act to silence those of us who monitor and protest pipeline projects and other gas infrastructure,” Cannon said. “Leaders in Charleston worked to force the pipeline and Rockwool factory on us here in the Eastern Panhandle, against fierce resistance.”

“West Virginians value their rights to free speech and free association as granted to us under the Constitution. We will not stand for the legislature taking these rights away.”

The Intercept reported last year that the American Fuel and Petrochemical Manufacturers, a powerful lobbying group, played a role in crafting similar legislation that has been introduced in more than 20 states.

“In June, Derrick Morgan, a senior vice president for federal and regulatory affairs at AFPM, spoke at the Energy & Mineral Law Foundation conference in Washington, D.C., explaining the role his trade group has played in criminalizing protests,” the Intercept reported.

“James G. Flood, a partner with law firm Crowell & Moring’s lobbying practice, introduced Morgan as ‘intimately involved’ in crafting model legislation that has been distributed to state lawmakers around the country. The attendees at the event received copies of the model bill, called the Critical Infrastructure Protection Act, distributed through the American Legislative Exchange Council, a conservative nonprofit that serves as a nexus for corporate lobbyists to author template legislation that is then sponsored by state lawmakers affiliated with ALEC.”

In West Virginia, Sierra Club put out a statement saying the proposed legislation would “silence citizens’ constitutional rights to free speech and freedom of association.”

“This bill seeks to shield wealthy fossil fuel corporations from criticism and protest,” the group said. “The corporate raiders this legislation would shield are the same ones who seize West Virginians’ land through eminent domain grabs, construct shoddy infrastructure destined to fail, and leave the taxpayers of our state with the hazardous mess and the economic ruin. Now they want to punish people who protest pipelines on their own land, and those who speak out about the harm done to their health, their families, or their future.”

“There are already laws protecting infrastructure in place, and these corporations already have all the cash they need to buy their free speech. This bill seeks to silence and punish those most harmed by the excesses of these corporations and the infrastructure they impose on our lands. We oppose this handout to the gas, oil, and coal industries at the expense of our rights. It’s bullying, it’s unconstitutional, and it’s un-American.”

Russell Mokhiber is editor of the Washington, D.C.-based Corporate Crime Reporter.  He is also founder of singlepayeraction.org, and editor of the website Morgan County USA.