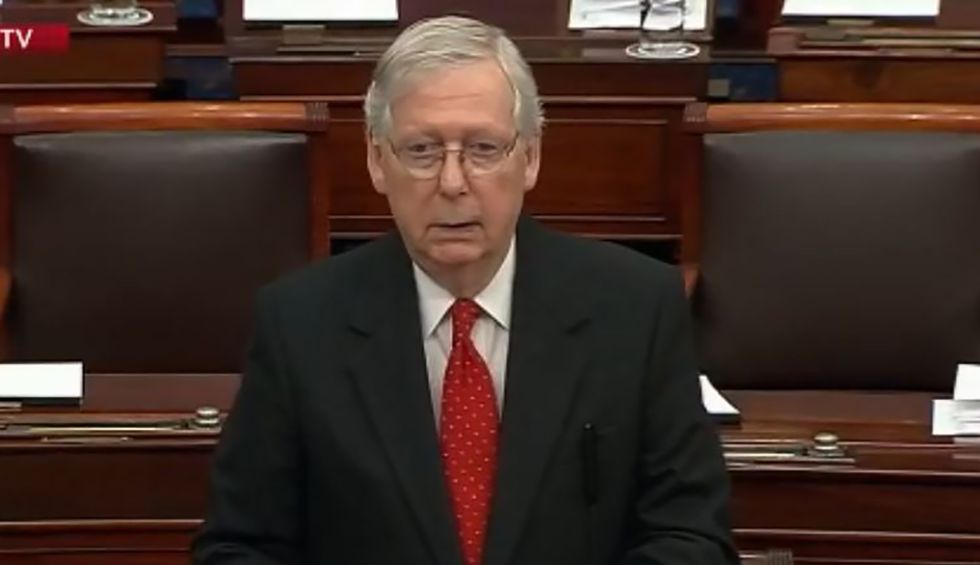 The trio of Republicans claimed that "outside groups" are responsible for demands that Barr step down and said the attorney general "has shown that he is committed without qualification to securing equal justice under law for all Americans."

"The nation is fortunate that President Trump chose such a strong and selfless public servant to lead the Department of Justice," the GOP leaders said. "We expect that, as always, efforts to intimidate the attorney general will fall woefully short."

The Republicans' statement, which one commentator slammed as "pathetic," comes days after more than 2,000 former Justice Department officials signed an open letter urging Barr to resign over his decision to overrule career federal prosecutors and reduce the recommended prison sentence for Stone, who was convicted last November of witness tampering and lying to Congress.

Critics said the GOP leaders' defense of the attorney general shows the Republican Party is fully on board with Trump and Barr's abuse of the powers of the Justice Department for political purposes:

"The shocking action taken by you or your senior staff to seek special protections for Mr. Stone make a mockery of your responsibilities to seek equal justice under the law," the senators wrote.

The Washington Post reported late Tuesday that Barr—who admitted to intervening in the Stone case in an interview with ABC last week—has told people close to Trump that "he is considering quitting over Trump's tweets about Justice Department investigations."

"The administration officials said Barr seemed to be sharing his position with advisers in hopes the president would get the message that he should stop weighing in publicly on the Justice Department's ongoing criminal investigations," the Post reported.

Trump last Tuesday used Twitter to voice his displeasure with federal prosecutors' recommendation of seven to nine years in prison for Stone. Hours after Trump's tweet, the Justice Department announced it would intervene to reduce Stone's recommended sentence.

Last Friday, Trump asserted on Twitter that he has "the legal right" to order the Justice Department to do his bidding.