Is Mueller in Trump's crosshairs? The president is not going to settle for pardons 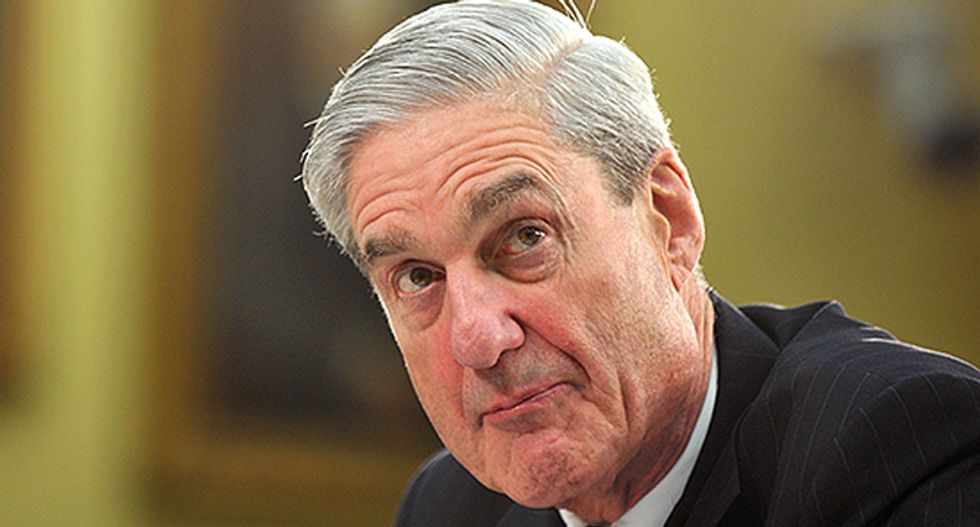 FBI Director Robert Mueller testifies during a House Appropriations Committee hearing on the FBI Budget, on Capitol Hill on March 19, 2013 in Washington, D.C. (UPI/Kevin Dietsch via Creative Commons)
John Stoehr, The Editorial Board
and
The Editorial Board
February 15, 2020

When Senate Republicans acquitted Donald Trump of abusing power and obstructing the US Congress, they established the precedent that the president is the nation-state and the nation-state is the president. His interests are the national interest. His friends are our friends. His enemies our enemies. We’re a nation of men, not laws.

In the hours and days after acquittal, the Republicans in the Senate pretended they were doing no such thing, just as the Republican majority of the US Supreme Court pretended in 2000 the invasion of one branch of the federal government into another branch did not establish any sort of legal precedent. But just as Bush v Gore set the Republican Party on a new course toward minority rule through the force of law, Trump’s acquittal set the GOP on a new course toward elevating themselves above it.

The result has been a president unleashed from normal constraints and pursuing objectives that—again—show contempt for the US Constitution and the rule of law. Trump is now free to abuse his power and profane virtually whatever he wants, tempting the House to impeach him again and the electorate to send him packing.

He fired administration officials who testified against him. Goombahs at the Treasury Department expedited to Senate Republicans financial documents related to Hunter Biden while sandbagging House Democratic requests for the president’s tax returns.

Trump, moreover, seems to be preparing for what would ordinarily be unthinkable in a democratic republic: prosecuting federal prosecutors for their love of this country.

Recall the two main takeaways of his report to the Congress. One, Trump did indeed obstruct justice—nearly a dozen times, Mueller hinted. The special counsel wouldn’t say so, though. Only the Congress could say so, he said. Two, the Russians sabotaged Hillary Clinton’s candidacy, because the Kremlin wanted Trump to be the president.

The second takeaway got less attention, but it evidently scarred Trump for the public to know his presidency is the product of covert cyberwarfare directed by the Kremlin, not a legitimate election. We have known since the beginning Trump’s greatest fear is being seen as illegitimate. Newly acquitted and newly married to the American national interest, Trump seems ready to “prove” he’s a legitimate president even if it means investigating, prosecuting and jailing the man who discovered the truth.

It wasn’t clear until this morning that Trump had Mueller in his crosshairs. We already knew the president told Bill Barr, the US attorney general, to go easy on Roger Stone, Trump’s longtime goon. Stone was convicted late last year for lying to the Congress, among other things. Four prosecutors associated with Mueller’s team said Stone deserved as much as seven years in prison. Barr intervened, saying his sentence should be three to four. A federal judge has the final say. Expect to hear more about that soon.

But the massacre has been in slow-motion. Turns out the president told Barr to go easy on Michael Flynn, too. Another facet of the president’s revenge, post-acquittal, is apparently making sure the crooks, liars and traitors caught up in Robert Mueller’s investigation of Trump’s 2016 campaign receive a special kind of equal justice.

Some say Trump’s next move is pardoning Stone and Flynn, but that thinking suffers from lack of imagination. We now know Barr has taken control of all “legal matters of personal interest” to Trump, according to NBC News. We also know, as of this morning, the president isn’t going to settle for pardons. He wants blood. He said:

Congratulations to Attorney General Bill Barr for taking charge of a case that was totally out of control and perhaps should not have even been brought. Evidence now clearly shows that the Mueller Scam was improperly brought & tainted. Even Bob Mueller lied to Congress!

Trump yesterday denied interfering with the free and fair prosecution of justice. But, he said, if he had, he has “the absolute right” to. No, he doesn’t. To interfere is to explicitly obstruct justice, which is a crime and yet another impeachable offense.

That he believes he does makes sense, though. His interests are now the national interest. His friends are our friends. His enemies our enemies. A president can’t break the law when the president is the law. He can’t obstruct justice when he is justice.