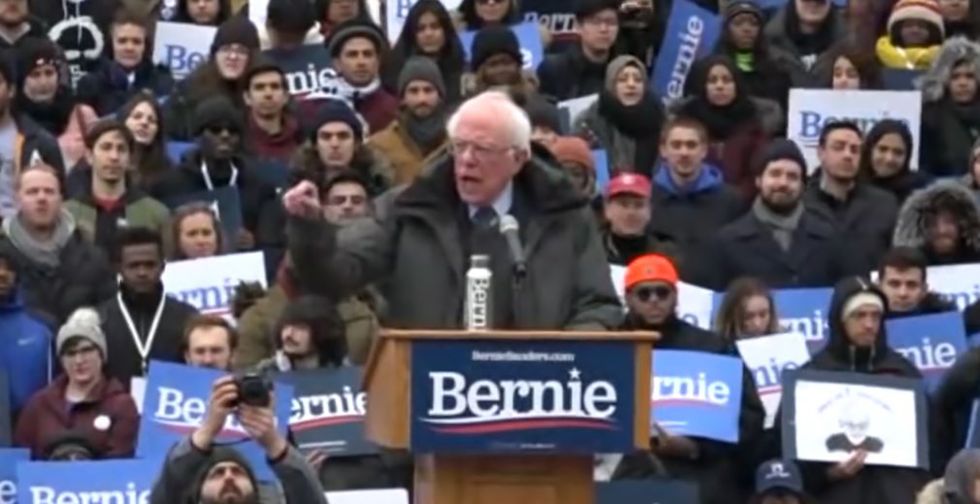 The biggest hurdle for movement progressives like Sen. Bernie Sanders is not the perfidy of the Democratic establishment in some abstract sense. The real challenge is some widely embraced conventional wisdom which holds that nominating candidates who veer to far from the center is tantamount to electoral suicide.

But that almost ubiquitous belief is usually an unexamined one. It is, to a large degree, based on a small handful of anecdotes--in 1964, Republican Barry Goldwater was crushed by Lyndon Baines Johnson and eight years later, Richard Nixon returned the favor to Democrat George McGovern. (To a lesser degree, Walter Mondale losing 49 states to Ronald Reagan in 1984 also bolsters this view, but unlike Goldwater and McGovern, Mondale was the favorite of Democratic Party insiders.) A significant problem with extrapolating too much from that small sample of races is that in each case, the "fundamentals"--economic metrics and the incumbents' popularity--suggested that those candidates faced a structural disadvantage and, all else being equal, they should have lost those campaigns.

Some argue that Sanders' unapologetically progressive agenda would doom him in a general election against Donald Trump. But several studies have found that voters don’t necessarily punish presidential candidates for taking positions that the pundits view as “extreme,” at least not by much (it may be different for congressional candidates). Summarizing the data in The Washington Post, George Washington University political scientist John Sides wrote that the data show “there is scarcely any penalty for being extreme. To put it bluntly: Candidates may be extreme because they can get away with it.”

Sides cautions that one shouldn’t conclude that “candidate policy views have no impact whatsoever,” but “it does mean that an American public that is not that ideological may not use ideology as a shortcut in voting for presidential candidates. And this in turn allows presidential candidates to have views well to the left or right of the average voter.” (It might be a challenge in the sense that mainstream pundits and political reporters have a bias toward centrism and their almost singular focus on the cost of progressive policies can distort the debate.)

Others argue that Sanders' identity as a social democrat--and Republicans' inevitable effort to blur the lines between the Scandinavian-style social democracy he advocates and Soviet gulags--would be a killer against a businessman like Trump. Gallup's polling does suggest that in isolation, "socialism" plays badly with the electorate. But when Data for Progress tested three hypothetical head-to-head poll questions pitting Sanders against Trump, one which simply named the candidates, one that identified their party affiliation and one that associated Sanders with socialism, Sanders came out ahead in all three. When no information other than the candidates' names were given, survey participants went for Sanders over Trump by a 47-41 margin; with socialism thrown into the mix, Sanders came out on top 47-42.

As of this writing, Sanders has topped Trump in 12 of the 14 head-to-head polls released since the beginning of December, leading by an average margin of 4 almost points. It's obviously early and swing states are what really matter, but those results suggest that Americans aren't repelled by the "socialist" Senator from Vermont.

Beyond polling numbers, one could argue that what some Democrats see as Sanders' flaws would be real strengths in a general election matchup with Trump.

He has been criticized by some racial justice advocates for an almost myopic focus on how wealthy elites game the system. That may have hindered him in the last primaries, and it may have exposed a blind spot for a guy who has represented the whitest state in the US, but it makes him a good choice to make the argument that Trump is one of the most corrupt presidents* in our history and articulate how his policies have hurt ordinary Americans. Democrats won big in 2018 talking about healthcare and other kitchen table issues with which Sanders has long been associated.

In 2016, Trump won the Electoral College by convincing a share of the electorate that they faced a choice between two equally venal alternatives. Sanders has railed against millionaires and billionaires gaming the system for their own benefit for decades, and while he's been a reliable fundraiser for the Democratic Party, he doesn't have the kind of history of jet-setting with wealthy elites that helped Trump and his allies hobble Clinton.

Sanders' relentless focus on the issues he cares about would also serve him well in the face of the distorted attacks that the Democratic nominee will inevitably face--he's adroit at staying on message. "Authenticity" is a vaguely defined feature beloved by pundits, but there is something to be said for Sanders' sometimes curmudgeonly consistency--he "tells it like it is," and voters tend to appreciate that.

And while Sanders has been criticized for not identifying as a Democrat, that ostensible independence may well prove to be an advantage in a contest against Trump. Trump enjoys high favorability numbers among Republicans, but polls tend to find that a significant share of that support is soft. Negative partisanship is a powerful force, and if the Democratic nominee is perceived as someone who doesn't necessarily walk in lockstep with the party, it might offer some Republicans permission to cross over. Most polls find Sanders leading the Democratic field among voters who identify as independents.

The conservative columnist Gabriel Schoenfeld noted for USA Today that Sanders has taken some truly radical positions in the past, and argues that the GOP would use those positions to destroy his reputation in the general. That's probably true, but the right will demonize any Democrat who becomes the nominee. With Joe Biden, their focus would be on Hunter Biden and Burisma Holdings, his handling of the Anita Hill hearings, his age and his history of violating women's personal spaces. They'd hammer Warren for being disingenuous about her heritage--Trump's "Pocahontas" attacks. Amy Klobuchar has a history of abusing her staffers--she'd be painted as the nastiest of ball-busting nasty women. Pete Buttigieg would face a homophobic whisper campaign on the right while at the same time taking GOP attacks from his left flank about his history as a corporate consultant.

It is probably impossible to know which line of attack would gain the most traction. In 2016, the right made a private email server and a charitable organization into major "scandals" for Hillary Clinton and the mainstream press fell for it.

The difference this time is that everyone knows Trump can win--and that he won't grow into the office or be constrained by his advisors or Republicans in Congress. While anxious Democrats agonize over the candidates' electability, this race will ultimately be a referendum on his presidency regardless of who becomes his opponent this fall.