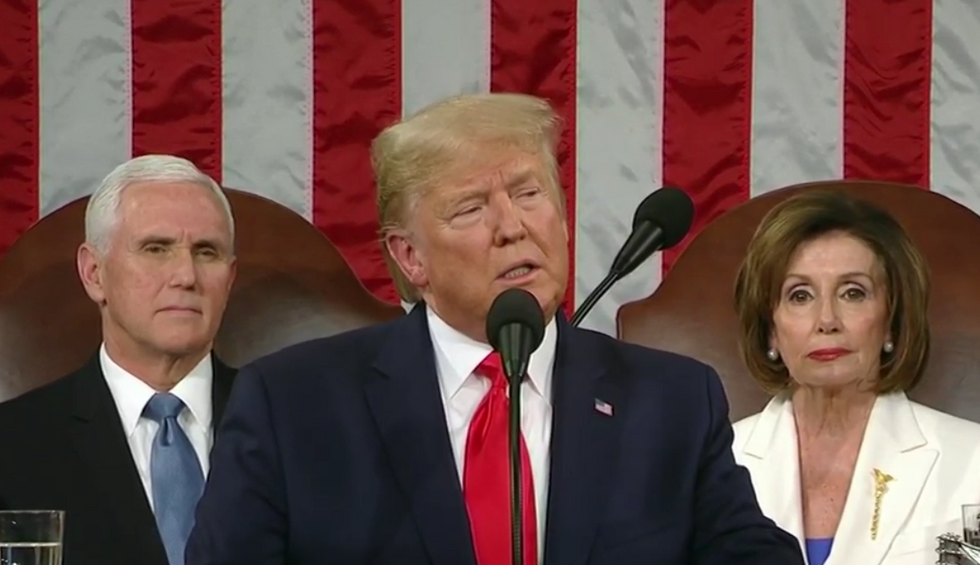 On Tuesday night, President Donald Trump appeared before a joint session of Congress to deliver the State of the Union.

Trump spoke monotonously, as he often does when reading from a teleprompter, and viewers were forced to endure the excessive clapping and standing ovations that at platitudes that have become ubiquitous at these events. But it also at times resembled a campaign rally, with Republicans chanting "four more years" and the president detailing gruesome details of crimes in order to fearmonger about immigrants.

Here are seven notable lies that Trump told during the speech:

1. "We will always protect patients with pre-existing conditions."

This one was flagged by CNN fact-checker Daniel Dale before Trump began speaking. Republicans, despite claiming credit for President Barack Obama's achievement at passing into law protections for people with pre-existing health conditions, are in fact backing a lawsuit that seeks to dismantle those protections.

2. "Thanks to our bold regulatory reduction campaign, the United States has become the #1 producer of oil and natural gas in the world, by far."

Dale flagged this one as false too, explaining: "The US became #1 in 2012, under Obama, though its advantage has grown under Trump."

3.  Trump claimed credit for the low unemployment rate and ending the "failed policies" of the Obama administration.

The trend in unemployment shows little sign of a sudden shift because of a change in presidents:

Trump recently suggested that cuts to entitlements will be on the table in his second term, though he tried to walk that back. And Trump's previous budgets have already pushed for cuts to the programs.

Right after promising to protect Medicare — which is a socialized health insurance system for the elderly — Trump had the audacity to suggest that socialism destroys health care.

6. Trump claimed he has confirmed a record number of judges to the federal bench.

7. "In America, we celebrate faith. We cherish religion. We lift our voices in prayer and we raise our sights to the Glory of God."

Trump embraced the rhetoric of "religious freedom" that Republicans like to use to protect Christian dominance in American society. But the idea that the Trump administration cherishes religion and celebrates faith in the abstract — rather than just Christianity in particular — is clearly nonsense in the wake of the expansion of the Muslim ban.