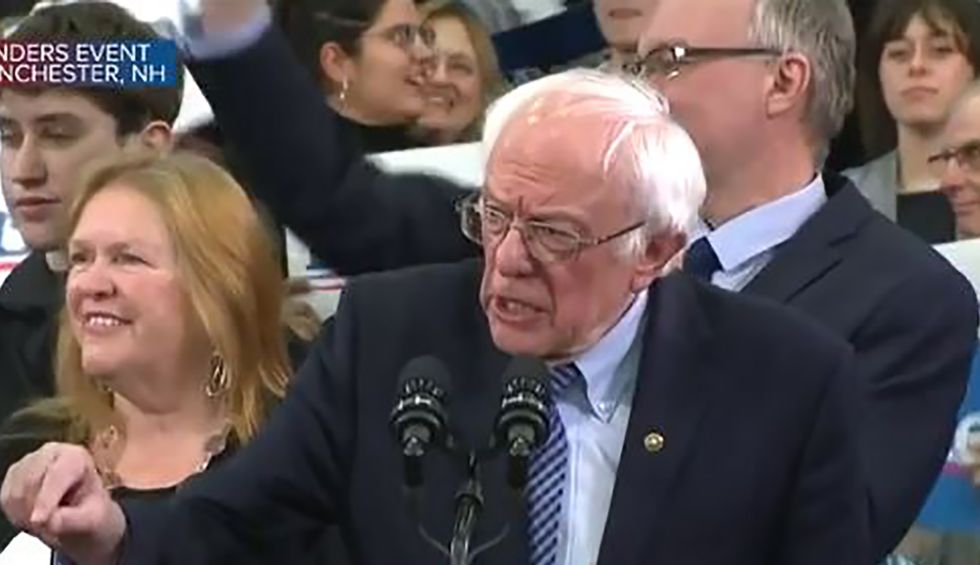 More than ever, Bernie Sanders is public enemy number one for power elites that thrive on economic injustice. The Bernie 2020 campaign is a direct threat to the undemocratic leverage that extremely wealthy individuals and huge corporations constantly exert on the political process. No wonder we’re now seeing so much anti-Bernie rage from leading corporate Democrats -- eagerly amplified by corporate media.

The pattern is enmeshed with the corporatism that the Sanders campaign seeks to replace with genuine democracy—disempowering great wealth and corporate heft while empowering everyday people to participate in a truly democratic process.

Big media are continually amplifying the voices of well-paid reporters and pundits whose jobs involve acceptance of corporate power, including the prerogatives of corporate owners and sponsors. And, in news coverage of politics, there’s an inexhaustible supply of former Democratic officeholders and appointees who’ve been lucratively feeding from corporate troughs as lobbyists, consultants and PR operatives. Their corporate ties usually go unmentioned.

An important media headquarters for hostility toward the Sanders campaign is MSNBC, owned by Comcast—a notoriously anti-labor and anti-consumer corporation. “People need to remember,” I pointed out on Democracy Now! last week, “that if you, for instance, don’t trust Comcast, why would you trust a network that is owned by Comcast? These are class interests being worked out where the top strata of ownership and investors hires the CEO, hires the managing editors, hires the reporters. And so, what we’re seeing, and not to be rhetorical about it, but we really are seeing a class war underway.”

Routinely, the talking heads and go-to sources for mainline news outlets are far removed from the economic pressures besetting so many Americans. And so, media professionals with the most clout and largest megaphones are quite distant from the Sanders base.

Voting patterns in the New Hampshire primary reflected whose economic interests the Sanders campaign is promising to serve. With 10 active candidates on the Democratic ballot, Sanders “won 4 in 10 of voters with household incomes under $50,000 and nearly 3 in 10 with incomes between $50,00 and $99,000,” the Washington Post reported.

Meanwhile, a trio of researchers associated with the Institute for New Economic Thinking—Thomas Ferguson, Jie Chen and Paul Jorgensen—found that “the higher the town’s income, the fewer votes cast” for Sanders. “Lower income towns in New Hampshire voted heavily for Sanders; richer towns did the opposite.”

The researchers saw in the data “further dramatic evidence of a point we have made before: that the Democratic Party is now sharply divided by social class.”

It’s a reality with media implications that are hidden in plain sight. The often-vitriolic and sometimes preposterous attacks on Sanders via powerful national media outlets are almost always coming from affluent or outright wealthy people. Meanwhile, low-income Americans have virtually zero access to the TV studios (other than providing after-hours janitorial services).

With very few exceptions, the loudest voices to be heard from mass media are coming from individuals with wealth far above the financial vicinity of average Americans. Virtually none of the most widely read, seen and heard journalists are on the low end of the nation’s extreme income inequality. Viewed in that light—and keeping in mind that corporate ownership and advertising dominate mainstream media—it shouldn’t be surprising that few prominent journalists have much good to say about a presidential campaign fiercely aligned with the working class.

“If there is going to be class warfare in this country,” Bernie Sanders told the Iowa AFL-CIO convention last summer, “it’s time that the working class of this country won that war and not just the corporate elite.”

To the corporate elite, goals like that are unacceptable.